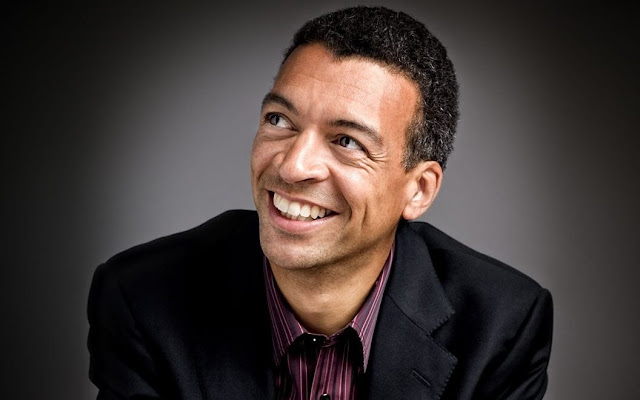 Roderick Williams sings Schumann Frauen-Liebe und Leben at the Wigmore Hall with pianist Joseph Middleton, highlight of an unusual programme Williams calls "Woman's Hour" because it features Lieder that highlight the lives of women.  As Williams says, Lieder aren't necessarily gender-specific, but works of imaginative expression.  So composers and poets were male, but that didn't stop them from caring about how women might think or feel.  The idea that songs should be rigidly classified as male or emale is cultural apartheid, a regressive demeaning of the very values of humanity that Lieder, and indeed the whole Romantic movement, stand for.

Towards the end of the last century, Schumann's Frauen-Liebe und Leben came in for flak from some Lieder fans, thereby ruining it for female singers who risk being attacked for being "anti-feminist" if they like it.  But surely serious Lieder fans should have known better.  Nineteenth century women may not have had equal opportunities but they were human beings with feelings, and even  now, women who chose love and marriage are not traitors to their sex.  Hating Frauen-liebe und Leben says more about the haters than about the music.

Adalbert von Chamisso (1781-1838) was a progressive by the standards of his time, a man of the world and open minded, and a friend of Madame de Staël who was no Handmaid's Tale.  In these poems, Chamisso describes a young woman as she matures and develiops her identity. She becomes strong enough to handle being on her own.  Schumann, too, was not repressive. He knew that Clara was the top celebrity pianist of her time, forging a career without the support of managements and modern PR teams. She'd fought her father in court for the right to marry. Not the sign of a shrinking violet.  She was the breadwinner, continuing to work long after Robert's death. Though neither she nor Robert knew it at the time, Frauen-liebe und Leben was almost prophetic. Schumann's setting is delicate but it's not "effeminate", but rather reflects tenderness and intimacy.

When Matthias Goerne did a programme with  Frauen-liebe und Leben and Wagner's Wesendonck Lieder some audiences went apoplectic, but again that says more about themselves.  It's always easier to hate something different than take it on board.  He did this programme at the Wigmore Hall in 2006 where audiences in general know what Lieder is about and aren't threatened by any deviation from recieived wisdom. He revealed the innate beauty of these works, and the fundamental dignity of human expression.  If Lieder fans (or self styled Lieder fans) can't cope with that,  they desreve to stick with kitsch and schlock.

Williams and Middleton extended to programme with Lieder by Schubert and Brahms, also portraits of women with feelings and minds of their own, and Clara Schumann's Liebst du um Schönheit, which is pleasant enough but proves the case that some women can decide for themselves where their true talents lie.
at June 12, 2020