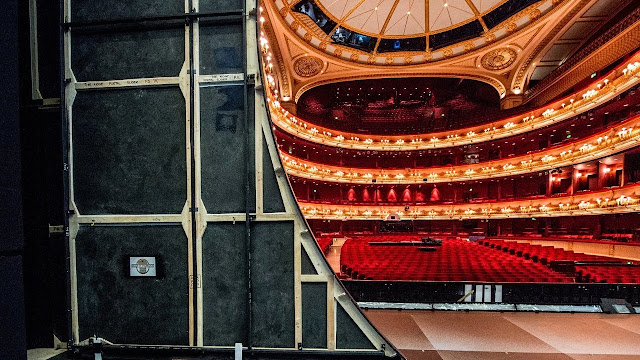 Lots to listen to this weekend : Live from the Royal Opera House, London, from the Rudolfinium Prague with Simon Rattle conducting the Czech Philharmonic and Magdalena Kožena, Britten from Aldeburgh,  Britten on Camera documentary on BBC TV 4, plus the LSO tonight (John Eliot Gardiner, Mendelssohn) plus much more.

"Doing our best to re animate the spirit of this gorgeous house" says Antonio Pappano in the introduction. And the ROH is glorious - it's heartbreaking to see it empty and its grand traditions silenced for the forseseeable future. That is WHY we need concerts like this, to remind us of what we might lose forever, if we don't take this crisis seriously.  Most musicians are freelance : they can't suddenly end up on the dole or get jobs filling boxes at Amazon. Like athletes, they need to keep training to keep their skills.  All that expertise gone to waste. The Royal Opera House is the second largests arts employer in this country, after the BBC, and contributes greatly to the economy. It is significant that far too many music fans do not recognize the role of live performance in keeping music alive.  Typical sneers on the net from "music lovers"- "we don't do live in my neck of the woods", "too many classics around already", "We only need Youtube" and most shameful of all, "We don't need professional musicians, amateurs are enough".  We're not just up against a pandemic and financial disaster but up against music fans who can't even comprehend the role of live performance in music-making.

Above all, live performance is a communal activity, which constantly regenerates artistic growth.  The ROH is huge, not particularly suited to chamber recitals, but at least the company is making an effort, not, like the South Bank, giving up and closing down while keeping governments grants. So we might have to pay £4.99 to view later ROH concerts, but so what ? We should all be doing something to help.  In recent years, the notion that everything should be free is delimiting experience and poisoning growth.  The ROH website (as always) is full of petty complaints but it's not hard to access the concert (which starts a few minutes in) and remains online for repeat listening  There is a certain amount of echo at the beginning of the film before the mikes adjust by the time the performance starts.  Louise Alder sings Britten On this Island, and Toby Spence sings Butterworth A Shropshire Lad, and Gerald Finlay sings Mark-Anthony Turnage Three Songs  and Finzi Fear no more the Heat of the Sun.   The pianist is Pappano himself. For opera regulars, "Au fond du temple saint" from Bizet The Pearl Fishers, an opera that's notoriously difficult to stage, and Handel "Tornami a vagheggiar" from Alcina.

Since the ROH is also the home of the Royal Ballet, Francesca Hayward and Cesar Corrales dance the world premiere of a new pas de deux, choreographed by Wayne McGregor to Richard Strauss Morgen! , Louise Alder singing the Lieder.  Listen to McGregor describe why the arts must not be left to desiccate by default.  "And tomorrow the sun will shine again (Und morgen wird die Sonne wieder scheinen)  And that support needs to be coming from listeners like ourselves.
at June 14, 2020