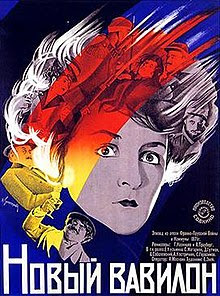 Dimitri Shostakovich's first film score, for the 1929 film by Grigori Kozintsev and Leonid Trauberg, The New Babylon (Novyy Vavilon). The film makers were part of a co-operative known as FEKS (the Factory of the Eccentric Actor) that thrived on the daring new possibilities offered by film as an artistic medium,  thriving on futurism and the avant garde. The subversive spirit of the 1920's squeezed into political orthodoxy.

Like the film makers, Shostakovich was young and idealistic : this was his first commission for the movies. (the score to be played live at screenings). Cinema was a truly innovative art form, in that it appealed to mass audiences who might not otherwise have been drawn to “art”.  By the standards of the day, The New Babylon was daring. By working on it, the youthful Shostakovich was right in the centre of what was artistic avant garde in Soviet terms. He didn’t have the relative luxury composers in the west had, of conducting and teaching. He needed the movies to make a living. What is intriguing is how much film influenced the development of his music.  Thus the brassy militaristic marches, interposed by manic crowd scenes, chreographed to highlight excess and abandon.

The film celebrates the Paris Commune, dutifully showing images of downtrodden workers, capitalist degenerates, effete officers, healthy peasants and other stereotypes. The plot is simple: the downtrodden rise up against the system with some vague idea of “getting rid of the bosses” but are soon crushed by the military. The acting is banal. The heroine uses one pained expression for every purpose. It’s a relief when she suddenly falls out of the plot, her place taken by a minor actress who really can act, so much so that her personality seems to enliven the screen, even if she’s long dead and forgotten. 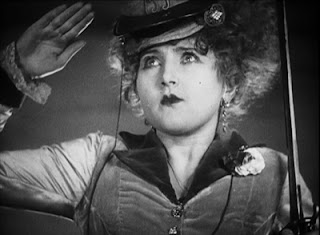 This being a propaganda film, the plot doesn’t bear analysis. One moment the washerwomen struggle with weariness. Once they’re told they’re free they suddenly wash with such hysterically manic vigour they get soaked through in the process. If only it were that simple….. The climactic scene is one where the communards and the bourgeoisie face each other in a stand-off. Of course the communards are supposed to be expressing contempt for the depraved ways of the capitalist class, proving their moral superiority and ultimate victory. Perhaps it’s the bad acting again, but the distinct impression I got from the scene was that the actors playing the communards would much rather have been enjoying sinful hedonism.  Perhaps the film was banned because it portrayed the degenerate capitalists with too much glee. They may be a drunken lot with rotten teeth, but they sure seem to have a good time. At least they get to do it in satins and lace. Indeed, the decadence is portrayed with such historical detail that in one brief shot, I’ll swear I saw why the Can Can was so scandalous! Mixed messages, then, in this film. 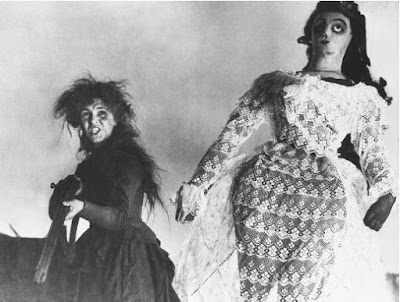 Shostakovich's score is a delightful riot of witty set pieces, such as the Marseillaise and variations thereon, Can Can music and a maudlin Tchaikovsky piano solo to match the onscreen scene where a communard plays an instrument consigned to the barricades. Moreover, there are obvious “scenery” effects, such as gunshots, the trundling of carts, cannonades and so on. Subtle this isn’t. Someone somehow managed to edit film and music in such a way that they are perfectly synchronised.  When I first saw the restored fim, back in 2006, I wasn't too impressed by the cinematography, but re-watching after all these years, I appreciate it a lot more for what it is.  We're all puppets, the film seems to suggest, caughtup in situations beyond our control.
at June 21, 2020