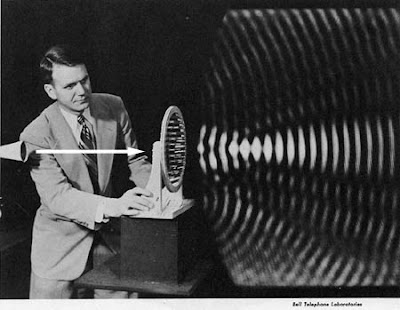 A “formula composition”, said Stockhausen, was one where a basic idea generated ever expanding forms. Stockhausen’s Harmonien, for example, morphs through different instruments and ensembles. Inori is an extension of Mantra, a dialogue for two pianos. The same basic concept applies, where ideas are passed between performers, examined and passed on for further development. Perhaps all music stems from similar basics, but with Stockhausen, the process is drawn out, so it can actually be witnessed in operation. Inori is full of incident, descriptive and eventful. It’s music that begs for film – if only Stockhausen had written it for cinema! Here, two mime artists mount a platform and act out the “conversation”. Kathinka Pasveer was Stockhausen’s muse, so with Alain Louafi, we were getting as authentic an event as possible. Despite the crisp playing of the BBC Symphony Orchestra under David Robertson, who has a real affinity for Stockhausen, Inori is drawn out rather long, a conceptual experience rather than wholly musical.

Even more conceptual was Hymnen. Total darkness in the Barbican Hall, only a projected circle of light at the top of the stage. Was this a symbol of the moon or just a circle of light, like a spotlight without performer ? That’s why Hymnen works so well, for me, anyway. It is a game of illusion, provoking myriad different interpretations. There aren’t any performers as such. The music materializes invisibly, projected from electronic mixes at the sound desk. But what do these sounds signify? We hear snatches of anthems like Deutschland über Alles. Obviously, Stockhausen was no nazi. Perhaps he’s recreating very early memories, for the sound is distorted, fragmented, incomplete. We‘re confronted with our own assumptions by what this music “means”. We forget that the words were written in 1841 and the music is in fact by Haydn. When we listen, we’ve added our own modern connotations. Similarly, Stockhausen throws in snatches of what we recognise as “God Save the Queen”. That, too, has a past life of its own, disassociated from present meaning. Stockhausen then skewers that idea by throwing in the Internationale and The Star Spangled Banner for good measure. They are too well embedded in the music to be simple commentaries on politics and power.

Are they “music” at all ? The electronic fragmentation dominates the narrative, such as it is, so the hymns are heard through a filter of unreality. It’s like playing with the dial on a long wave radio, catching indistinct snatches of sound from distant radio stations. Somewhere, someone is listening to a “real” programme, but all you hear, fiddling around with the dials, is what floats around in space on sound waves. Two very different aspects of “listening”. And what are we actually listening to? Concrete music or particles of sound circulating through the ether like atoms, accidentally picked up in transmission?

For me, that’s why Hymnen works so well. It’s powerfully conceptual, turning the experience of listening on its head. What we “hear” comes from what we hear within our own minds as we filter what we “receive” and turn it into something we can make sense of. Or not, as the case may be. “We” are the performers, so to speak.

Yet again, Stockhausen, despite his reputation for being a control freak and autodictat, shows his subversive, humorous streak. The last part of Hymnen revolves around the sounds of someone snoring. It’s too regular to be anything but a mechanical reproduction, it’s not “real” snoring. Sometimes vast, somnolent chords crash in round the snoring, but it remains unchanged. Then snatches of Stockhausen’s voice are heard, cheerfully cajoling. Is he trying to wake the snorer ? No chance, this is tape loop, it can’t be changed that way.

Personally I loved Hymnen, and came out feeling refreshed. Not so most of the audience, many of whom left part way. But that, too, is the choice Stockhausen offers. Many of the anthems in this piece were played to captive audiences who had no chance to walk out.

see all the other Stockhausen posts on subject list at right - nearly every London concert this year. And if you really want provocation, look at the post on Bernd Alois Zimmermann';s Requiem for a Young Poet HERE Zimmermann did Hymnen years before Stockhausen and better.

See link below for the whole Stockhausen Day events and details of the BBC Broadcast on 31st Jan (online too)
http://www.musicalpointers.co.uk/reviews/liveevents09/StockhausenDay.html