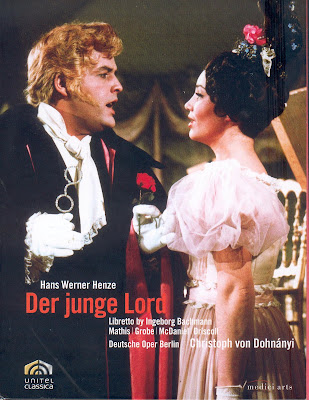 Just released - Hans Werner Henze's Der Junge Lord. It's the 1968 production that's been around on audio forever but now on DVD.

Suddenly an English Lord materializes in this milieu where they're always slipping into French. Foreign means good unless it's "too" foreign". The Lord has black servants! The Lord does everything differently. The locals veer from hate to servility.

Then one day the Lord's nephew appears and there's an elaborate ball. The young lord is a boorish lout but the locals ape everything he does thinking it's fashion. Note verb. Local beauty is engaged to marry him, thanks to the machinations of her wealthy aunt. As they dance, the young lord gradually goes nuts, rips off his fancy clothes and reveals himself - an ape !

The visuals add a lot. The young lord, the Old Lord's secretary and the beauty's real boyfriend all have grotesque sideburns and hair dyed vile shades of apricot. A hint ? The glory of this opera though is the way Henze writes music in cross currents that cut diagonally across each other - not layers but disturbing, unsettling counterpoint. Yet it's so well woven it's not jagged until the end when pretence can no longer be sustained. The chorus are particularly well written, many voices blending, individuals lost in a mass, but not an organized mob. There's a lot of Henze himself in the English (old) Lord but he doesn't despise the townsfolk, despite their credulity.

It's a lovely mixture of ham and high drama. Edith Mathis glows as Luise, her Barbie doll helmet of a hairdo. Donald Grobe is Wilhelm, her worthy lover. They are so sweet, you could squeak ! This is Young Frankenstein long before Mel Brooks. And Frankenstein is perhaps the apt image. The ape sings divine high tenor, almost as angelic as a counter tenor. What has the English Lord been up to ? and for how long ? Libretto by Ingeborg Bachmann.
at January 13, 2009

"It's a lovely mixture of ham and high drama. Edith Mathis glows as Luise, her Barbie doll helmet of a hairdo. Donald Grobe is Wilhelm, her worthy lover. They are so sweet, you could squeak! This is Young Frankenstein long before Mel Brooks."

Such entertaining writing, Anne! And I just saw this on Amazon not two hours ago and thought, "I really need to get this."

Thanks for the write-up!