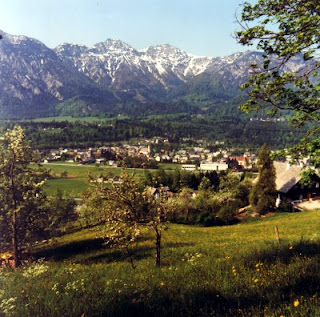 "Ich reise aus, mein Heimat zu entdecken"  On this stirring note begins Ernst Krenek's Reisebuch aus den österreichischen Alpen. It sounds confident and hearty but this is no Romantic hero striding into the world. Unglaube gegen uns  selbst ist zuviel in uns verwurzelt (lack of faith in ourselves is deeply rooted). This song cycle is, no less, a parable for modern times, when the idea of identity is constantly being challenged by change. Like Hanns Eisler's Hollywood Liederbuch, Krenek's Reisebuch is one of the milestones of 20th century song.

Not many years previously, the Hapsburg Empire had collapsed. Previously Vienna had been the capital of a culturally diverse, polyglot nation. Suddenly it was a severed rump of German speakers, who weren't German. So Krenek set off into the mountains to make sense of what might be the Austrian soul. In the second song, Verkehr, Krenek makes it clear he's dealing with modern conditions. He travels by electric train, and then a bus. Dangerously steep inclines, teetering on precipices. Will the machines survive? Then he visits a monastery, where the monks aren't Technik Sklaven, but live quietly, with their ancient library. 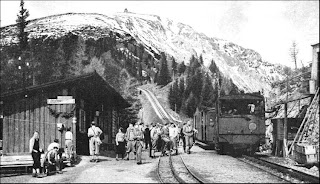 In the mountains, life is brutally difficult. Steep slopes, dark valleys, poor soil. The weather's treacherous. Sudden storms blow up, even in summer. It's always raining. Wetter and Regentag, relentless pounding motifs, echoing the grim reality of life for the locals.  As Krenek notes, the dead are exhumed after 10 years because the land's too precious. Their remains are put on display for gawping visitors. Suddenly you realize just how much a tourist Schubert was. He liked the scenery, but was, essentially, an outsider on holiday. Krenek constantly refers to the contrast between sojourners and locals, those who have to live with the consequences of change. and those who can run away.

Hence the "modern" images that keep recurring, and sub themes of anomie and disorientation. Musically,  Krenek uses jerky, angular forms that break up the seamlessness of the world he's describing, because it's on the verge of disintegration. 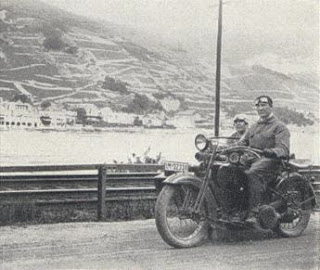 Mountain folk need tourists because they're desperately poor. But tourists bring irremediable change.Alpenbewohner is a remarkable song, where the locals look sullenly at the wilden Nomaden who descend upon them, speaking oddly "although in German", their motorcycles tearing up the silence, vulgar because they have money.  But what do the locals want? More tourists, preferably English, for whom there must be English churches and 18 hole golf courses, because they can't take Austria for what it is. Look at the scars caused by ski slopes in this photo. Golf courses are even more disastrous to the fragile alpine environment. The rich Germans disrupt the Austrian stillness with their vulgarity and motorbikes, but the locals are so poor they have to sell out to the tourists. Krenek didn't know, in 1929, how prophetic his observations would prove..

Krenek follows this song with Politik. It explicitly refers to the First World War and the sufferings it brought to Austria, "Look to the West" he says "where a free people live on free mountains". It's Switzerland, not Bavaria, a small self-contained country that values neutrality. Yet later, Krenek thinks of Italy but knows that "a thistle transplanted in a lovely garden will not become a rose".

Again and again, images of gentle somnolence in the music are shattered by outbursts. The explosive Gewitter (Thunderstorm) isn't merely descriptive, but emphasizes sudden upheaval, from which there's no escape. So Krenek goes back to Vienna (on a schnelle Zug) Huge swelling crescendo on the words Liebes Vaterland. But it isn't just the mountains he's referring to, but his identity as a Viennese.
Krenek had just had a wild success with Jonny Spielt Auf, with the black jazz saxophonist. "Degenerate"!  screamed critics who wanted time turned back. So Krenek goes to the mountains, the "pure source" where people still sang folk songs and lived primeval lives. Significantly, Krenek relates to Schubert, not Mahler, Wolf or Mozart. Intriguingly, the song Krenek dedicates to Schubert is Unser Wein. It's a gay,. lilting melody, but the punchline is that Austrian wine is "valued only by those who know to seek it out". In 1929, Schubert wasn't quite as ubiquitous as he is today. Perhaps Krenek's hinting at deeper levels in Schubert, which we're familiar with now, but in those days, Schubert's  image was prettified through operettas like Blossom Time.
Perhaps Krenek's figuring out who he is, as a composer living in modern times, troubled by constant, threatening change. Back home, he comes across a strange, sleepy village in the suburbs. There's a motto written above a doorway. "Ich lebe, und weiss nicht wie lang. Ich sterbe, und weiss nicht, wann. Ich geh', und weiss nicht, wohin., mich wundert's dass ich noch Frolich bin." Suddenly, Krenek (who wrote the text as well as the music) finds what might be the key: accepting that you'll never know the answers. Accepting that life's uncertain, yet making the most of it. Krenek's Reisebuch aus den österreichischen Alpen really is a parable for modern times. 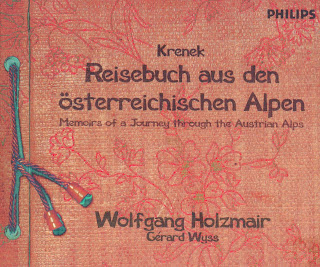 Wolfgang Holzmair's probably done more than most to bring this song cycle into the mainstream.  He's passionate about Austria, and lesser known Austrian composers, as diverse as Franz Mittler and Robert Stolz.  He deserves much credit. This is his 1998 recording, a beautiful mini album, lovingly illustrated with period photos. Track it down, because even if there are new versions, this one is the classic. All 20 songs plus an extra bonus the Fiedelleider op 64.  If you can't get a recording, get the score from Universal Edition.

Holzmair also devised a special programme combining songs by Schubert with songs from this Krenek cycle. It was beautifully well chosen, highlight inner themes both composers wrote about. I heard him sing the programme at an intimate recital  in 1999, organised by the Austrian Cultural Forum, held in the Leighton House Museum before it was renovated. He is singing this special programme at the Wigmore Hall, where Florian Boesch sang excerpts fro the Krenek songbook two years ago.  .Holzmair has in fact recorded the "special" programme, but it's not commercially available anymore. I bought my copy from him personally after another semi-private recital. Must dig it up. Please  also see  my latest on this cycle HERE and a review, coming up soon !
at May 19, 2010