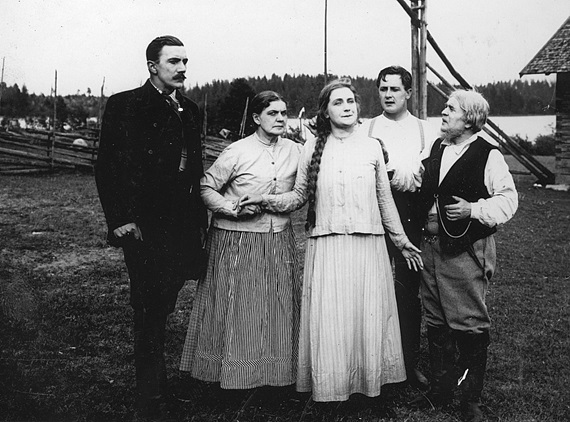 Even if you don 't know Finnish or Swedish, this 1922 movie Anna-Liisa, is so dramatic that you can follow the story without words. Anna-Liisa, a nice country girl is about to marry a wealthy hunk called Johannes, in an idyllic Finnish farm by a lake. But she has a secret! Three years ago she murdered her own baby. This is Jenůfa, except that she does the dirty work herself .

The film was based on a play by Minna Kanth (1844-1897) the first great Finnish playwright, a contemporary of Ibsen .She was a feminist, and interested in modern social issues. Follow the link above to find out more about her. Hers was a liberal, artistic and free-thinking milieu that produced artists, writers, musicians and poets who created the Finnish Republic. To really appreciate Sibelius in context, it helps to understand the "Finnish Renaissance".The film is subtitled both in Swedish, which most educated people spoke, and in Finnish, the language of national identity (which Sibelius, among others had to learn as a second language). English text HERE

Kanth wrote the play, Anna-Liisa, in 1895.  This film, by Teuvo Puro and Jussi Snellman, was made in 1922, but is very well shot for its time. They use the background as an essential part of the story. Look at the detail: life in a simple country farm as it was long ago : the fence built with diagonal logs, windows built of shutters to keep out the winter. When Anna-Liisa's kid sister wants to look into her room, she shifts a slat aside. Modern audiences will be wowed by the elaborate spinning wheel, used for making woolen thread. People didn't just make their own clothes, they made the thread. Look out, too, for the well, operated by an elaborate but obviously efficient mechanism. Horse drawn carts and actors who don't need to be taught how to move around them.  Even a wood sauna by the water, and a naked man strolling out. This pure, simple lifestyle represents Anna-Liisa's world. You can almost smell the clean, fresh air and trees.

Anna-Liisa is seduced by a farmhand called Mikko, who runs off to work in a logging camp. In the play, there's be no way of showing what logging involved. Here we see the mighty forests, and logs being floated down the river. Logging is a dangerous business, loggers jump into the river to shift the logs. Understanding this makes you appreciate how much Mikko has achieved by leaving the village, and why he assumes that Anna-Liisa should have to marry him whether she wants to or not..

Anyway, Anna-Liisa gets pregnant and the baby dies, but she keeps her secret from everyone. Yet guilt weighs heavily upon her. Her little sister has a dream (around 33 min) where we see the "dream" girl superimposed on the sleeping girl. In her nightdress the dream girl finds Anna-Liisa dead, by the lake and garlands her with wild flowers. This simple device sets the mood for the real drama. Anna-Liisa sits by the lake, distraught, and suddenly throws herself in, screaming "My Baby!" Along comes Mikko, who drags her out. On Sunday, Anna-Liisa has to marry, but whom? Mikko or Johannes? Marrying Mikko will hide her guilt, but she doesn't love him anymore. But Anna-Liisa's no wimp. In front of the parson and people, she reveals her secret and says she'll take the consequences. And she doesn't marry either man!
at May 25, 2010