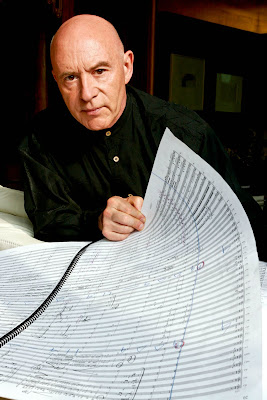 It's the performance filmed for French TV at the Palais Omnisports de Paris at Bercy in March 2008. It's a stadium where popstars perform and sports events take place. It seats 8000 plus, dwarfing the Royal Albert Hall. Most symphonies would shrivel in such a place, but it's a credit to the film makers, the organizers and the orchestra that this performance actually succeeded.  The film is much better than expected, because it's made by people who really are musically informed.

I was there, at this performance, seated to the right of the stage, above the arena about halfway back, a very good spot, near enough to see the orchestra fairly close up, and near enough to see Eschenbach and his soloists slowly troop into the building from a tunnel deep in the bowels of the vast complex. What a theatrical moment! Even before the music starts, the mood is established. The idea of reverential procession is absolutely musically astute for Mahler's Eighth is a pilgrimage, a journey through suffering to sublimation.

Indeed, a very good case could be made for hearing Symphony No 8 as Mahler's true Mass. It's a profoundly spiritual experience. Astounding message, astounding approach. Catholic Masses are high theatre - processions, costumes, ceremony, choirs, all geared  to emphasizing the glory of the mystery at the heart of faith.  Eschenbach and the Orchestre de Paris may be performing in a mega complex, but it's not really all so different from the Pope appearing at Mass in St Peter's in the Vatican (crucial differences of course). Big message, big resources. Mahler knew what he was doing.

And because the message of this Symphony is uncompromising, no wimpy half measures. Eschenbach commands the orchestra : no messy entries, no waffle. Even more striking about this performance is the precision in the quieter passages. The Second Part begins remarkably quietly: like the Consecration in a Catholic Mass where God is supposed to become present,  the moment announced in silence, broken only by shrill bells. It's the holiest, most sacred part of the Mass.  The big vocal parts may be more spectacular, but this is the heart of the symphony, the critical transition. Eschenbach had huge forces before him, and thousands in the audience around him, but iit felt like that moment in the mass, where all else was irrelevant but quiet veneration.

Look out too for the moment of sheer theatre when Marisol Montalvo materialises at the top of the huge choir, resplendent in white. She's like an angel, an apparition from the Heavens! It's a wonderful touch that couldn't be done in an ordinary concert hall or before the invention of microphones, but by God, it's accurate, emotionally and musically. Listen too to the organ, specially brought in. Live, it was a bit lost in the vast space, but they've balanced the sound better on the film. Technically, this performance must have posed huge problems, so the fact that balance is generally good is something to respect. The large screens where abstract images are projected were a little distracting live, but in the film they're used in a subtle way, never intruding, and hide the blank space behind the choir.  The overwhelming size of the performance space and the vast audience was very much a part of this performance, so the sweeping panoramas are important. As with a mass, the symphony works as a communion between listeners and musicians.

In the symphony, the soloists don't sing "to" each other, as in an opera, but as separate confluent identities. It's a thoroughly orchestral way of writing for voice, so it's intelligently filmed, the camera panning widescreen, showing soloists, conductor and orchestra on the same horizontal frame. People coming new to Mahler often think this symphony is "operatic". It's understandable, but not when you really get to know his work.  Mahler decisively turned his back on writing opera even before he started writing symphonies. Fundamentally, what he was interested in was something altogether more unique: the idea of a series of semi-abstract works exploring a spiritual journey. He uses voice as part of his palette, not to create "characters"or interactive roles. So beware those who push Mahler as "an opera composer". Think, instead, of the spiritual dimension of his music, and the idea of Mahler 8 as Mass makes sense. And this performance makes you think about the nature of Mahler's spirituality and intellect.

Excellent point concerning the parallels between the Consecration of the Host and the opening of Part II. (Surely there is no more extraordinary musical landscape?) I wonder whether Mahler had Beethoven's Missa Solemnis in mind...