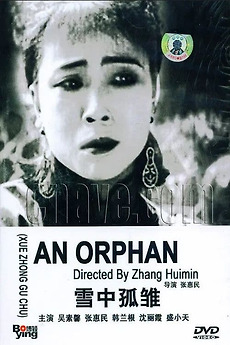 Many important Chinese movies are impenetrable to non-Chinese viewers, which is a pity, because some of these films are seriously good, and should be part of world film heritage.   Very unusually, especially for 1929, this silent, The Orphan was made with both Chinese and English subtitles. It's rollicking good fun, especially the final scene where the hero rescues the heroine from a dungeon, singlehandedly rounding up a gang of crooks with a rope, leaping from parapets. Bad guy gets trapped with the iguanas. Douglas Fairbanks Jr eat your heart out.

What's even more interesting is that the film is a historical record in itself.  Look at the opening sequence which shows  a traditional Chinese wedding in an upper-class household, complete with musicians, some of them children. The bride arrives in an elaborate palanquin, carried by retainers, and steps out, in a beautifully embroidered costume.  Since the film was obviously low budget, the film makers were using real, authentic costumes and sets. These would have been impressive enough at the time - today they would be treasured museum pieces. The wedding ritual is shown in detail.  It's realistic because the audience knew about Chinese weddings, and about wedding nights where bride and bridegroom have never met before. Though this is a movie, it's useful as an authentic resource on traditional customs. Notice how many of the people aren't actors, but ordinary folk.

Eventually mistreated bride runs away and attempts suicide by lying on railway tracks, but is rescued by  hero, a modern young dude with slicked-back hair, plaid tie, plus fours and a motorcar with four-digit license plate. He's the Young Master, whose family live in a "western" villa, with marble columns and staircases, with western wallpaper, though their furniture is mostly Chinese (and very posh). You can tell how modern they are, they have a wind-up gramophone and listen to jazz. Watch the sequence where mother and daughter "discuss" the music through visual images projected onto the gramophone horn. The singer isn't Al Jolson but a blacked-up Chinese !

The hero's family have status - Dad cleans his western trophies on the mantelpiece (too precious for the servants)  but they observe The Chinese New Year. Sis is seen eating dried lotus root candy (looks like a cookie but isn't.) They're playing Chinese chess. In an amazing scene, they go out and play at farming, with hoes and water carried in buckets by maids. Real Petit Trianon stuff which would have had the 1929  audience cackling with  laughter because they would have known what real farming was.A reminder that being rich and westernized doesn't stop you being stupid.

Houses like this were pretty common at the time, in fact a few survive today, like Sun Yat-sen's villa in Macau, where his daughter lived until she died only a few years ago, which is now a museum. Again, because this was a low-cost movie, they probably used a real house or modelled it on a typical villa of the period.  So study the detail. Look at the women's clothing and hairdos. The cut of their sleeves and the length of their skirts are typical of the period, you can date Chinese dress just like you can date western. The women wear their hair bobbed and crimped, just like western women of the time. The heroine's hair is authentically untamed, like a real woman, not a processed actress.

"Assistant Director" is White Rose Woo, the actress who plays the heroine Chun Mei. Evidently a "modern woman" despite the wimpy character.  People watching this movie knew about arranged marriages and the tragedies they caused. This film was an object lesson, told as entertainment, its real message not lost on its audience. Brides really did commit suicide. Chun Mei is rescued by the hero but at least she shows initiative and runs away. The movies were a medium in which liberated women could make a mark. Most were actresses, of course, but there were several other female directors. By her body language, White Rose Woo seems Chinese, not overseas Chinese, so it would be interesting to find out who she was. (In fact film is the only way to preserve body language, which really does vary between cultures and periods. Another reason why this film is a study resource)

Significantly, too, the English titles show that the film makers wanted to reach a wider audience, outside China itself.  The "Orator" is John Chow who also "storied" the text. That's a historical archive, too, a very rare example of China Coast English, which was a curious hybrid of Victorian formality filtered through Missionary school, but "Chinese" too, because it follows Chinese grammar which doesn't use as many non essentials as English. When Chun Mei rues her fate, her words could come straight out of a Bible tract.  People really did use to talk like that, but little is preserved except in private letters. Yesterday was May Fourth. On May 4th 1919, the "real" Chinese revolution was launched, a movement dedicated to modernizing China through literature, art and persuasion. Movies were an essential part of this concept that art and entertainment could serve a social function. The Orphan continues to serve a social function because it's a snapshot of its time.


Please see The Chinese Mirror, where there's a detailed biography of White Rose Woo and her times.
Please see other full movie downloads on this site - both Chinese and European. Street Angel, Kuhle Wampe, Berlin Symphony, Dvorak Ufa, Faust, Caligari,  White Haired Girl etc. plus lots of shorts
at May 05, 2010