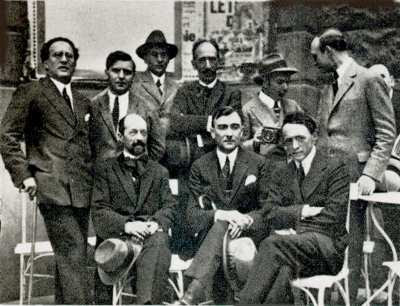 Piotr Anderszewski could hardly have chosen a better place for his Szymanowski Focus than the Wigmore Hall.  Szymanowski's never been "unknown". That's him seated in the middle with Arnold Bax on the right and Albert Roussel on the left.  Standing are Gregor Fitelberg, Fritz Reiner and Josef Szigeti. Several of them visited the Wigmore Hall in times past (the archives there must be a treasure trove)

Szymanowski's Metopes op 29 (1915). explores the same territory as his slightly later Myths, heard previously.  It's colourful mood music, recreating in abstract sound the composer's response to the Odyssey.  This is one of Szymanowski's best loved pieces. I learned it from Dennis Lee's good recording, but Anderszewski's more recent  CD

Anderszewski emphasized the point by following Métopes with Robert Schumann's Märchenbilder,  with Henning Kraggerud as violinist.  These "fairy tale pictures" aren't literal: Schumann's creating impressions, long before Debussy, though of course in a different way.

Hearing Szymanowski's Songs of a Fairy Princess op 31 (1915) in this context shows how Szymanowski's fascination with fantasy was far more than lush reverie.  The texts are by the composer's sister Zofia, but the music is bizarrely alien. Arabia seen through imagined hashish dreams?  There's nothing tame about this ulullating legato, these strange leaps up and down scales.  Think Delibes' Lakmé condensed into six short songs.

In the first song, The Lonely Moon, the phrases cry out like imams calling the faithful to prayer, designed to carry over vast distances.  Perhaps this is intentional. These songs want to burst out of piano-song mode, though I like them this way because they're so unusual. For once, the Wigmore Hall seemed too small to hold them in.  In 1933, Szymanowski transcribed some of them for singer and orchestra.

Iwona Sobotka sings Songs of a Fairy Tale Princess like a force of nature. She has, and needs, strong breath control. Sobotka's vibrato is carefully modulated,  so her lines shimmer, as if infused with light and air.  Most of these texts refer to escape. In The Nightingale, for example, the poet wants a bird in her chest, not a heart, because birds can fly away and be free. Sobotka decorates the words with exquisite melismas and trills, but she knows that their spirit is deeper. In The Song of the Wave, Szymanowski catches the idea of surging movement, sparkling arpeggiatos dancing over rolling rhythm. The ocean is beautiful, but the sailor might drown.  Whether the singer is lover or Nereid, we don't know. But Sobotka sings ukołysałabym cię na wieczny sen with such feeling, you don't need to understand a word of Polish to sense what she means.

After the First World War and the upheavals that followed, fantasy became associated with escapist retrogression. But it's a mistake to assume that all fantasy music is backward-looking..On the contrary, artists have often used dreams, myths and fantasy to stimulate ideas the literal cannot grasp. That's one of the reasons the Greeks used myth in the first place. For Debussy, Wagner, Ravel and many others, exotic dreams open up new worlds.  Szymanowski's heady perfumes are progressive.  He's thinking forward, even when he's looking back. 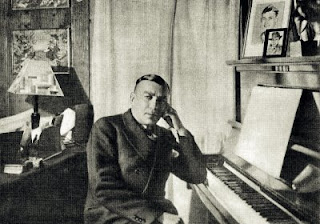 This photo shows Szymanowski at the piano . It's the late 1920's - look at the modernist lampshade and the dapper cut of his suit. He understood that good art should be original, even when building on the past.  "Our aim is not yesterday but today and tomorrow", he said in 1927.

Ten years separate Szymanowski's String Quartet no 2 op 56 from his first, but he's advanced into new territory.  Polish motives invigorate this, particularly the second movement vivace scherzando. Yet this certainly isn't cliché folksiness, but far more sophisticated. Like Stravinsky (with whom Szymanowski has a lot in common), Szymanowski connects to a primeval spirit of folk culture, using it to generate new ideas. This duality of old and new sparks creative tension. A lively performance by the Belcea Quartet, making the image of "vibration" come to life. Please see my report on the first Anderszewski concert at the Wigmore Hall HERE) PLease also see lots more on Szymaowski onn this site incl the wonderful Boulez recording of the First Violin Concerto, the Third Symphony and Krol Roger,
at May 08, 2010