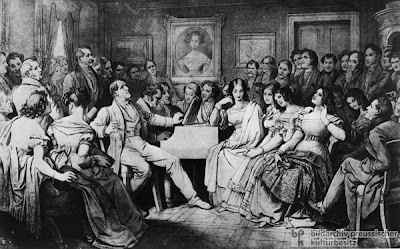 A few years ago, at a reception after a major Lieder recital, I noticed the pianist in a corner on his own. Since he is very famous in his own right I asked him how he felt about the attention being focussed on the singer. “That’s alright”, he answered, “it’s the music that counts”.

Lieder pianists may be unobtrusive but they are absolutely essential to performance. A good pianist is much more than mere “accompanist”, but interacts with the singer.

Accompaniment is a very special skill, quite distinct from solo playing. A soloist needs only to think of his or her self. The egotism solo performance requires doesn’t lend itself easily to song. A good song pianist, however, empathises and listens, shaping the piano part in relation to what the singer is doing

Fortunately, many good soloists have what it takes. Imogen Cooper, for example, spent much of her childhood fairly isolated, so the Sensucht of Lieder came naturally. Pianists who play a lot of Schubert and Schumann develop such an affinity with the composer’s idiom that they’ve got lots to offer when accompanying singers. Alfred Brendel is a perfect example. Moreover, he adapts to different singers. With Fischer-Dieskau, he’s fairly restrained, yet with Goerne, he challenges, so they both achieve something extraordinary. Their partnership raised the bar to unprecedented heights.

Yet some of the best Lieder pianists have spent their entire careers working with singers. Graham Johnson’s Song Maker’s Almanacs at the Wigmore Hall are legendary. He puts together such interesting, imaginative programmes that even if you’ve heard the songs before a hundred times, you get something new from these concerts. He’s also been the leading light behind many projects, like the groundbreaking Hyperion Schubert series. Who cares if he doesn’t play solo? His contribution to the art of Lieder is tremendous. Truly, he is a “Living National Treasure”.

Specialist pianists do a lot more than “accompany”. They develop performance by enhancing and supporting the singing. A few weeks ago Johnson demonstrated this unusual skill in a concert with Dorothea Röschmann. Her voice is delicate, best suited to songs of youthful purity. So Johnson devised a programme that highlighted her strengths, and played in a way that let her voice shine.

There’s now a whole breed of specialist Lieder pianists, like Julius Drake, Malcolm Martineau and Roger Vignoles. Sholto Kynoch studied with Martineau and Johnson, but has made his name with the Oxford Lieder Festival, which he founded seven years ago. It’s the biggest song festival in , supplemented by masterclasses, workshops and a year-long series of recitals. And he’s still just under 30 years old. Being empathic, and being able to bring out the best in others is an unusual gift. His love for Lieder is inspiring, his enthusiasm infectious, and he knows his material. So cheers for specialist pianists ! There’s a lot more to accompanying than merely spinning notes !

The pic shows Vogl wowing the girls. But look who's behind him, quietly playing. The guy without whom there would have been no party.