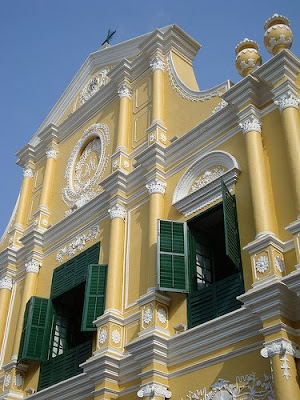 This is the church of Sao Domingo in Macau. This particular building is early 19th century, but there was a church of very similar design here from the mid 16th century. It's covered with elaborate filigree decoration like icing on a wedding cake. In Chinese, it's called Mui Kwei Tang (Rose Temple) as the filigree looks like vines and roses.

Interestingly, there are very similar themes in the oldest Chinese temple in town, The Ma kok Miu, which was founded around 1100, from which Macau takes its name. Perhaps the same craftsmen did the building work ? The Chinese and Macanese had a lot in common - both worshipped female deities, the Chinese the goddess Tin Hau and the Macanese the Virgin Mary. In Macau one of the favourite manifestations of the Virgin Mary is "Stella Maris", where she holds a small ship in her hand.

Also significant is the way the church was built to maximize air flow. It's hot in Macau, and humid. In the days before air conditioning sitting in a church packed with parishioners would not have been fun. So the nave is surrounded by a series of outer corridors, with windows placed strategically for maximum air flow. Note the windows ! They are kept open in summer even though birds fly in. The choir loft is directly behind these windows, airily above the nave.

Inside, it's roccoco fantasy ! The altar is gorgeous, encrusted with white filigree. In the middle is a Virgin Mary holding baby Jesus. The sculpture was made in Goa in the 1700's which is why she looks Indian. In the corridors around the nave are several side chapels with more saints and Virgin Mary's including one which is supposed to have miraculous powers. I've tried, she works! She gets taken round town in processions each year to bless the community. The statue of the Chinese goddess Tin Hau also gets processioned around town, too, with similar reverence.

At the side of the church is an amazing museum of religious art. Some of it is the usual baroque gold and silver finery, (HUGE silver catafalque used in processions) but some is specifically Macau. For example, the santos, exquisitely detailed ivory carvings made locally or imported from India. When the Tokugawa expelled Christians from Japan, most of them ended up in Macau, hence a strong Japanese influence on Macau art. The church was run by the Dominican order who fought like blazes with the Franciscans and the Jesuits.

The church is just off the main square in town, near important buildings like the Santa Casa di Misericorda, built in the mid 16th century as a sort of "welfare office" because there were lots of single women with children, dependent on charity. Opposite is the town hall, known as the "Leal Senado" or loyal senate, which held out against the Spanish when they claimed the crown of Portugal.

There is much more on this blog on Macau and Chinese culture, look at the labels on right. There is a big post about the Ruins of St Paul Ruinhas de Sao Paolo with fantastic pictures taken by me. The photo of Sao Domingo is by Kevin Tierney, one of the best.
at December 21, 2008

Great post!
Macau is such a wonderful place. Like they say in Portuguese, “não há outra mais leal” (there is no other more loyal).
Helder Fraguas

Loyalty it is true because many people at the time felt passionately against the union of Spain and Portugal. But Macau was so far away that they could deliberately ignore what was happening in Europe. In effect they achieved a kind of independent self government in the name of the Portuguese king. They also didn't like the Spanish because the Spanish controlled the Manila trade which was competition for Macau. Maybe the Spanish didn't take Macau by force because would have upset people in Portugal who didn't like them anyway.