High relief in the A Ma Temple, Macau 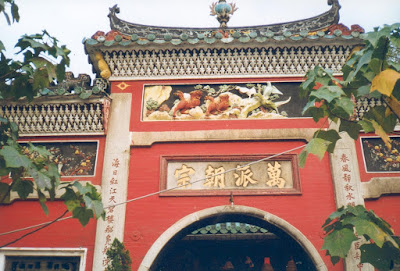 These are the "frescoes" in high relief in Ma Kok Miu, the oldest temple in the Macau area. Note how the pattern of white, fern-like tendrils is regular and vaguely "western" like the tracery in S Domingo church (see below). This is just a side gate, the temple itself goes all the way up the hill, with sacred rocks etc, one of which carries an inscription written by an Emperor in Sung times. Part of the temple experience is that you walk around, commune with the idea of landscape in compressed form. Below in the courtyard, it's crowded, noisy. Up in the summit it's calm.

The goddess A Ma was a girl from somewhere on the Zhekiang coast before 1000. During a typhoon, she appeared, walking on the waves, to save some fishermen from being drowned. So she's the principal deity all along the South China coast. Inside this temple there are massive boulders with images of junks carved on them, and some ancient models of ships. Opposite is a superlative museum of maritime history. But look at the stucco relief - isn't it wonderful ? And the glazed tiles on the roof, another regional speciality.
at December 24, 2008