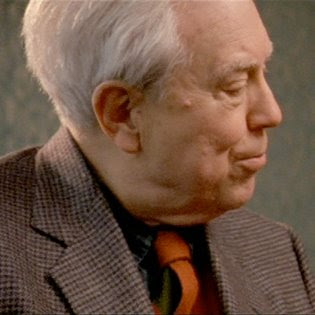 It’s unusual that any conductor can premiere three works written this year and two more, up to eight years old. But when the composer in question has reached his 100th birthday, it’s phenomenal. But then, that’s what Elliott Carter is like. There’s more life in him than many a third his age. “If I didn’t compose, I don’t know what I’d do”, he says, laconically.

As the late Edward Said wrote in his volume On Late Style, getting old can be liberating. What Carter is doing now is entering a distinctive new phase of development. His “late late style” as he puts it, shines with calm, confident lucidity. “I can doodle more easily than I used to”, says Carter but these “doodles” simple as they are, are quite profound.

One day in 2007, Carter and Oliver Knussen were having lunch, when the idea of an exercise in pure texture cropped up. Thus was born Sound Fields. Since Carter’s written so well for string quartet, it’s surprising that this is his first work for string orchestra. Yet, despite the larger numbers, it’s diaphanous, a gently wavering sequence of chords. There’s a single chord played by twelve sub-groups in the orchestra, startling density yet achieved by simple, elegant means. Although Carter’s still writing explosive pieces like Caténaires, where notes race in tumult, Sound Fields is slow and smooth, the chords gradually enfolding out of each other. It starts with slow timbred cello, evolving towards a simpler, barely audible final chord, also cello, that seems to evaporate into nothingness. All in barely four minutes.

Wind Rose, completed on 8th August this year, grows from Sound Fields, adapting the concept for wind ensemble. Here the chords evolve even more slowly, the almost static effect created by long planes of sound. Wind instruments breathe. The title refers to weather charts showing invisible currents of wind blowing at different velocities and direction. Thus, each instrument is chosen carefully. There’s a whole line of different clarinets. Even when they play together, their different pitches shade the sonority, extending depth. There’s also a group of six flutes, piccolo at the top, bass flute for lower register. The steady, unhurried pulse creates a sense of timelessness, as if each sound remains suspended in space, the chords turning serenely. Knussen said “We won’t get this many clarinets together again soon”, so he conducted the piece a second time, enhancing the idea of eternal, uninterrupted growth. It’s exquisite.

Between Sound Fields and Wind Rose, Knussen placed an “old” piece - from 2000. It was perceptive. Carter has written a lot for cello over the years, so it’s a way of expressing different levels of time simultaneously. The Cello Concerto also has references to Japanese moss gardens, where plants seem motionless but are growing, imperceptibly. The passage of time is marked by the steady drip from bamboo taps. The cello plays a long quasi melody, which over seven episodes reveals different aspects of the instruments' character.The transits are marked by sharp staccato from the orchestra, developed three times into protracted Interludes. Within each section there are interesting vistas – the dramatic, edgy Giocoso where the cello plays with angular, untuned percussion, and the Tranquillo, where the cello sings in ethereally high register. Yet there’s a strong sense of direction. The soloist is walking through the garden, engaging with it but has a separate identity. In this premiere, Anssi Karttunen played with a firm sense of purpose, his journey uninterrupted by the wonderful sounds of the orchestra.

Knussen introduced another “level of time” with Mad Regales. It was written in 2007 but harks back to the vocal music Carter wrote seventy years ago. Some years back, the BBC Singers gave a concert of Carter’s early songs and the madrigals that inspired him, so one could hear where he learned the polyphony that was to influence the characteristic intricate tracery of his later style. Mad Regales, however, is different conceptually. its three songs have sparer textures, where voices operate on different levels, and where single words pop out of the main vocal line to be savoured on their own accord. It’s an interesting non linear approach, and the six singers here operated like a chamber ensemble.

Like the Cello Concerto, the Horn Concerto, premiered in 2007, unfolds through a series of seven episodes with one orchestral interlude. It’s just over half the length of the Cello Concerto, but soloists need a break. The horn player, Martin Owen, is encased by the orchestra, interacting with different sub groups of instruments. Towards the end, horn and tuba (named Sam Elliott, oddly enough), join in conversation.

The Boston Concerto is a feat - almost a "pizzicato symphony" where string instruments are plucked, beaten, strummed, as well as bowed. They are reinforced by harp, piano and vibraphone, creating sparkling, fast paced rivulets of sound, contrasted with smoothly floating woodwind legato. Carter dedicated this concerto to his wife Helen. It's based on a poem by William Carlos Williams where love is described like rain, bringing life to the earth.Paul Griffiths, who wrote the excellent notes speaks of sequences of "musical raindrops.....rain seen in rainbow light". Like rain, textures vary. When the ensemble plays staccato on different levels, it's like a storm. Later, a single double bass takes up the theme, like a trickle after the storm has passed. “It’s fun”, says Carter. Perhaps that’s the secret of his longevity and irrepressible creative renewal. Why shouldn’t classical music be fun, and cutting edge ?