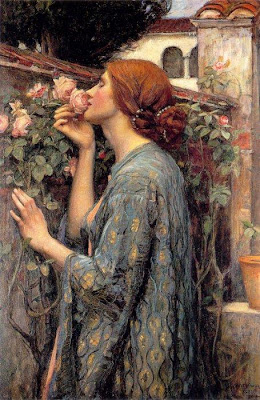 Last night I had the strangest dream. I was in a concert hall, vaguely churchlike, listening to a fantastic new piece of music - poetry, song, dance combined. Such a beautiful experience I could swoon like the Pre-Raphaelite and her rose..... The remarkable thing was that every word of the poem was clear, and I marvelled at its wisdom. Such ethereal music. Next part of dream, I'm transported to an open air site vaguely like Oxford but clean and uncrowded. And there the performers were again. The main soprano, a redhead, five others behind her in greys, blues, greens. Again the words so powerful ! Then suddenly I woke
"Und's Wort hab' ich vergessen"
Not even a Strauss von Zypressen to show for it
at December 16, 2008