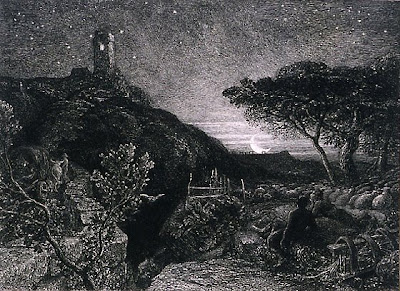 Chosen Hill in Gloucestershire is one of those "power spots" which attract creative energy. In the early 1920's, shy, repressed Gerald Finzi started to visit. He met up with Detmar Blow and other arts and crafts types, who introduced him to exotic things like yoghurt and alternative living. In many ways, Finzi's life was an extension of the William Morris ideal.

Ivor Gurney used to come here most days, walking the 5 miles from Gloucester each way. But it was worth it – from this hill there's a panoramic view across the Cotswolds, only broken by mists on the horizon (or smog). At the top of the hill is a church tower, dangerously poised on a cliff – parts are now blocked off. Below is a tiny cottage, low slung, almost invisble from the road. On New Year's Eve, 1925, Finzi went to a party in the cottage. At midnight, they came outside, into sharp frost, the night sky filled with stars, and "heard bells ringing across Gloucestershire from beside the Severn to the hill villages of the Cotswolds".

Stephen Banfield, Finzi's biographer, calls this the "hilltop epiphany", for it released in Finzi a surge of original music. This was the inspiration for In Terra Pax and Nocturne whose sub-title is in fact New Year's Music, filled with bells and joy. Finzi needed an impetus to find himself and something happened that night under the stars. "I love New Year's Eve," he told a friend later, "Though it's the saddest time of the year..... a time of silence and quiet". And soon after asked himself "must knowledge come to me, if comes at all, by some awkward experiment of intuition, and no longer by the familiar process (of reading other's work)?" ie Finzi was learning to trust his own artistic instincts.

Chosen Hill remained so dear to Finzi that nearly 30 years later, he took Ralph Vaughan Williams up the steep hill. The new tenants of the cottage had small kids. Finzi, weakened by cancer, caught their illness and died three weeks later.

In Terra Pax was also the last piece Finzi conducted, on 6th September, at the Three Choirs Festival (which is how he and RVW came to be on Chosen Hill that week)

"A frosty Xmas Eve, when the stars were shining
Fared I forth alone, where westward falls the hill,
And from many a village in the water'd valley,
Distant music reached me, peals of bells a-ringing"

Then an angel appears and sings "Fear not, fear not, fear not!" and the choir bursts into a song like multi layered pealing of bells, the orchestra throwing out chords like shards of light.

"The old words came to me by the riches of time,
Mellowed and transfigured as I stood on the hill,
Harkening in the aspect of th'eternal silence"

sings the baritone, and the choir sings "Peace, goodwill towards all men".