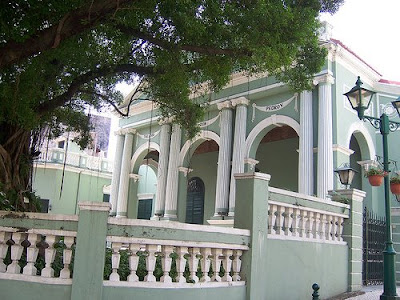 This is the oldest remaining western theatre in China. It's in Macau, a former Portuguese outpost on the Pearl River delta. The Portuguese had ventured East from the 1490's almost immediately engendering a mixed race community that went on to explore and trade throughout Asia. Japan by 1542. Macau was declared an "official" Portuguese city,with charter and all, in 1557. Luis de Camões, the Portuguese Shakespeare, possibly wrote part of the epic Os Lusiadas in a nearby grove.

An amazing place (or was) with a unique cultural heritage. Even a local dialect complete with literature and song. For centuries, Macau was the interface between China and the West. This is how peanuts came to China. Impossible to imagine Cantonese food without peanut oil, candies, cookies!

"A weed from Catholic Europe, it took root
Between the yellow mountains and the sea,
And bore these gay stone houses like a fruit
A Portugal-cum-China oddity........
And nothing serious can happen here".

The theatre itself, Dom Pedro V, dates only from 1860. Prior to that performances were held in private homes or purpose built matsheds like you still get for open air Chinese opera. It was "state of the art" for its time, hosting operettas, opera, piano recitals etc. It's elegant, and the acoustic's clean. Even the window shutters are wrought iron depictions of lyres and violins. During the Japanese war it was a centre for refugee music. Many of the refugees were musicians.

Benjamin Britten and Peter Pears did a Schubert recital here on 4 February 1956. Afterwards they went gambling as Auden would have told them about the city's racy reputation. They were bored witless. There was no contradiction between religion and gambling for the locals, who didn't indulge. It was something visitors did, sailors and Hong Kong people up for a dirty weekend. In any case Chinese didn't do"moral panic".

For many years after the early 1960s the building was derelict, but it was restored to its former glory a few years back. Somewhere I have dozens of photos of the restoration, antechambers, backstage, etc. It was amazing to stand where Britten, Pears and many before had stood and imagine Macau in its finery. The theatre's now a world heritage site, but, like The Holywell Music Room in Oxford, isn't in continuous use as it only seats 150, albeit in velvet elegance. Casual tourists have no idea of the treasures within! There's a short book about the theatre by Fr Manuel Teixiera (himself an amazing character), but you'd need a specialist librarian to track it down. (a copy is in the Macau historical archives). Read Jonathan Porter's Macau, The Imaginary City, one of the few decent books about the city and its special ambience. (try amazon and ebay) To see a video of a recital INSIDE this theatre click on the Macau label list on right. For a brief moment you can see the wrought iron balcony, with its stylized violins.

I was lucky to go into the building during the massive restoration in 2001, to see how it's put together. There is an inner verandah round the hall itself which provides a kind of climate control, shading from sun and wind. It gets really hot and sticky in Macau. All thet mahogany and velvet must have been stifling.
at December 03, 2008