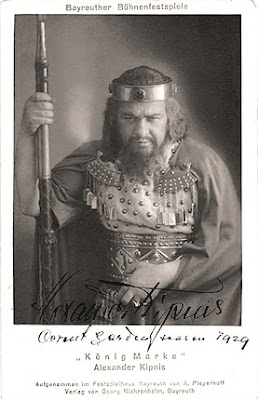 We’ve all heard Tristan und Isolde sung magnificently. This time we were here to listen to the orchestra. Seldom are concert performances of Wagner so definitively focussed on the music, rather than the glamorous outward trappings of opera. Indeed, it was a relief that the singing, with few exceptions, was below par, so could be largely ignored, the vocal parts heard from memory.

Whatever doubts I’d had about attending a concert of “bleeding chunks” were dispelled by Jurowski’s intelligent approach to how the music unfolds. Pairing the second act of Tristan und Isolde with the Adagio from Mahler’s Tenth drew out the reference in the first two sections of the Adagio to the opera which Mahler loved so dearly. Yet it also anchored the symphony in the context of what was happening in Mahler’s personal life. Not long before, he’d discovered that his wife Alma had been having an affair, and was so devastated he seems to have had some kind of crisis of confidence. He consulted Freud, who said Alma saw him as a father figure. So Mahler as Marke ?

Yet, significantly, the Tristan references soon fade. By the third development we’re hearing pure Mahler. The ebb and flow between the two main themes here was distinct. If it emphasized the “Romantic” aspects of the piece rather than the more complex elements, that was perhaps understandable in the circumstances. We weren’t here to think about the other movements or indeed about Mahler, but to hear how the piece enhances our appreciation of Wagner as orchestrator.

Jurowski conducts so vividly that the inherent drama in the music comes through so clearly that stage action seems unnecessary. The voices here are the instruments, the singers the soloists. The first violin at last gets the attention it is due. Its role is elusive, yet significant. The cor and bassoon, for example, extend King Marke’s lines vividly, even when he isn’t singing. Above all, Jurowski gets such a tight, muscular pace in ensemble. The sense of movement is palpable : the sea and all it symbolizes, “speaks” in this Act, too, propelling the action forward. The characters don’t stand a chance against inexorable fate.

Incidentally, László Polgár was singing with a bad cold. He’s superb in the role of King Marke. Indeed, he used the roughness in his voice to advantage. Marke sounded genuinely infirm, ravaged and old. This is intelligent musicianship, making the most of a difficult situation. I’d come specifically to hear him and wasn’t in the least disappointed.