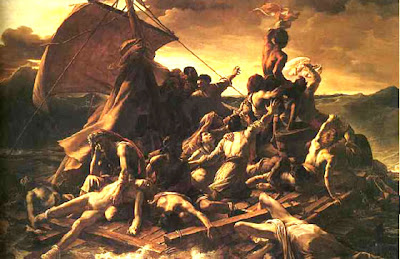 1968 was a watershed year like 1789, 1848 and 1914. So why haven't we remembered ? That was the year of the Prague Spring and its brutal crushing by the Soviets (remember them ?). It was the year of Red Rudi and the Paris riots. In Vietnam, the Tet Offensive. There was a huge massacre of civilians in Hué In the US it was "the summer of love". 1968 changed a lot of things.

Oddly, what I remember (apart from knowing a family wiped out at Hué) was the furore over Hans Werner Henze's Raft of the Medusa. It was only a small paragraph in a provincial paper, but somehow it jumped out at me. At the premiere of the new work someone raised a red flag. No big deal, given the spirit of the times and student revolt everywhere. But the police were called and the performance stopped. Henze was ostracized, his prosperous career destroyed.

What was all the fuss about ? Henze's political views were well known. He was a Communist, an opponent of the Vietnam War. The Raft of the Medusa was dedicated to Che Guevara. Its subject is pretty obvious, the suppression of the poor and weak. So why the self-righteous recrimination about the red flag being raised ? Anyone reading the score beforehand should have figured what it was about.

Until that point Henze and Dietrich Fischer-Dieskau were an item, artistically. Hans Neunzig, DFD's biographer (and hagiographer, some say) describes how DFD chased Henze to write music for him. Read what Neunzig says, he gives the original correspondence. So we have masterpieces like Elegy for Young Lovers, and much else. In his memoirs, Henze writes bitterly about someone who let him down. Read his exact words, too. So it's interesting to listen to the recording of the Raft of the Medusa, made the day before the scandal. It's still a powerful, hard-hitting piece. What has happened to music since ? We have had many wars and things to protest about, but composers are silent, now.

After a traumatic break Henze came up with Versuch über Schweine, a cry of anguish so primal it's painful to listen to. But Henze has integrity. Perhaps now, after forty years he can get the respect due to him. When I was young there was no chance I could have heard Henze's music, but the news of the flag fiasco started me reading about Géricault, Fanon and other naughty things. So I owe Henze a lot, indirectly.
at December 27, 2008