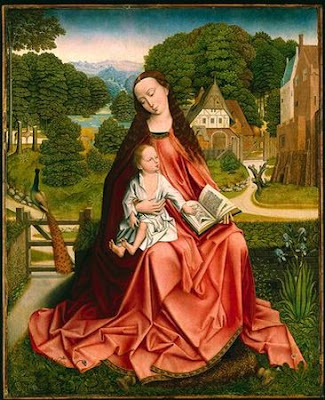 In the blossoming summer landscape (here distinctly German !) the child without sin plays with his mother. Yet the tree that will become the Cross is already growing in the woods behind.


The exact painting about which Eduard Mörike wrote this poem is unknown, but the scene is pretty typical of the early German school which linked biblical themes to naturalist reality. The poem was set by Hugo Wolf. As Eric Sams said of the song, "With a modal tonality and slow rhythms, the melodies of voice and piano move by step in contrary motion, all within a very limited compass. This gives the song an otherworldly quality of timelessness, .....a motionless summery haze within which the vision is concentrated from a whole landscape into one tree. The small quiet phrases of voice and piano lead up to one stab of pain at the last words, where a transient discord is introduced and resolved. Then, the postlude relives the timeless scene: and if the song has made the proper effect there is eternal grief in that eternal summer".
at December 26, 2008