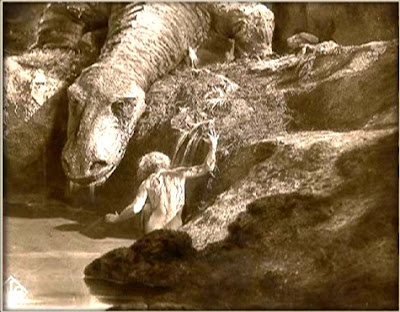 Before Fritz Lang made Metropolis, he made Die Nibelungen, the blockbuster of its time, on a scale so elaborate that the film took two years to make. The script was by Thea von Harbou, based very loosely on early German legends, not Icelandic saga and most pointedly not Wagner.

Fritz Lang's Siegfried (Paul Richter) forges his own sword, and gets on fine with Mime. He sets off for Worms because he's heard of Kriemhild, sister of King Gunther. She's a devout Christian. Cue: Mass, crucifixes, altar boys, etc making you realize just how non-Christian Wagner was.

On the way, Siegfried kills a remarkably realistic dragon. What Wagner would have given for this snake-like serpent that walks and watches Siegfried with soulful eyes! When the dragon is killed, a clear stream flows from its wound, and Siegfried is made invincible, save from where a linden leaf falls on his naked torso. Alberich more or less hands over the magic sword (not Nothung) and treasure before turning to stone. Siegfried becomes a temporal ruler, with 12 kingdoms as vassals. 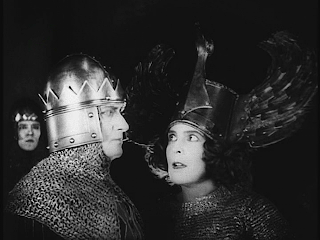 The palace at Worms is an art deco fantasy. Geometric patterns, as much Bakst or Red Indian as medieval, perhaps connecting to "primitive" and "tribal" archetypes. Watch out for Hagen Tronje's helmet, with eagle wings on each side half a metre high! Significantly, Hagen is blinded in one eye, like Wotan.

Kriemhild swears total revenge. on everyone.  Part 2 of this six hour saga is titled Kriemhilds Rache, and in many ways it's even better than Siegfrieds Tod.  Kriemhild gets herself married to Attila the Hun, no less, and lives in a huge castle in the desert, surrounded by yurts. The castle (vaguely like the Tian An Men) has a magnificent semi-circular door - the same set used in  Gunther's palace. Obviously, this was  cheaper than building a new set, but this has symbolic meaning, too. Panoramic shots, fabulous crowd scenes, an art deco riot in the place. 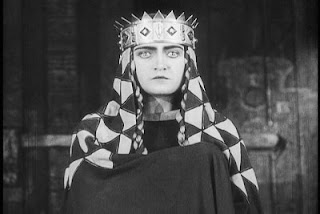 Attila the Hun is an ugly dwarf, much like Alberich, but benign.  He doesn't sack the churches of Rome because he's "with the white woman" as his soldiers say. Yet Lang doesn't portray him as a demon.  This Attila. ugly as he is, adores the blonde, curly haired baby son he has with Kriemhild while she hates the kid. It's cute how the baby actor gurgles with laughter at the Hun - less prejudice than Kriemhild. 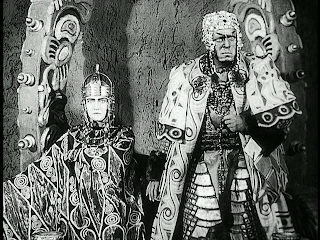 Gunther, Hagen, Nibelungs, Burgundians and assorted European vassals come to visit.  Attila refuses to harm them. Hospitality and honour are sacred to him, he says, almost the same words as Gunther long ago used to welcome Siegfried.

Once Kriemhild was a sweet, meek Christian maiden. Now she's a robotic monster bent on destroying all in her wake. Aren't you human?! pleads Attila the Hun. "Not since Siegfried died," she answers. Neither Brunhild nor Ortrud were as mad as this. Secretly Kriemhild bribes the Huns to attack her brothers. The rebels invade Attila's grand feast and somehow Hagen kills the baby boy. Attila's devastated with grief yet cannot stop the mayhem bursting out all round. Huns massacre Nibelungs, and the palace is burned. Fantastic special effects and crowd scenes.

"We were not united in love, but now we're united in hate" cries Attila, horrified by Kriemhild's insane intransigence.  At last almost no-one remains alive. Hagen Tronje turns out to be a kind of hero, refusing toi reveal the Nibelung treasures, and offers to die to save what's left of the kingdom. Kriemhild stabs and kills him, but drops dead herself.  Total carnage. To what avail?

Throughout these two films, the themes of honour and loyalty recur.  Kriemhild just takes them to an extreme degree, her loyalty to Siegfried destroying all logic and decency.  Perhaps that was deliberate.  Germany had just come through the First World War, where nations tore each other apart for honour and loyalty. Millions had died, not only in battle but in the famines and revolutions that followed. Von Harbou later became a Nazi but here she's intensely anti-war, anti-power games.

Please read about Fritz Lang's Metropolis (1927) HERE on this site. there's lots here too on other Weimar movies, some full downloads, too, like Faust and Nosferatu.
at October 12, 2010