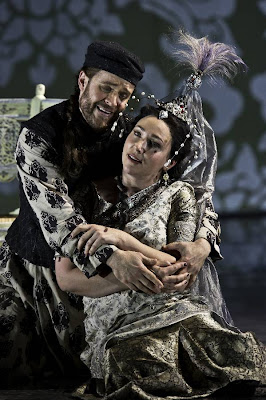 Vividly colourful ENO Handel Radamisto at the Coliseum. Polygamous profusion of images of Asia - Mugha India, Tokugawa Japan and Chinese restaurant chic and the odd Tibetan. The text, of course, mentions Armenia. Visual indigestion, if you're culturally aware. But then to Handel and his audiences, specifics didn't matter. Radamisto is a morality tale that transcends time and place.

Tiridate (Ryan McKinny) lusts for Zenobia (Christine Rice) who's happily married to Radamisto (Lawrence Zazza). To win her he'll dump his wife Polissena (Sophie Bevan), usurp Farasmane's kingdom (Henry Waddington). But Zenobia's having nothing of it. She'd rather die than be unfaithful. All subplots and complications (they're all family, for example) are decorative embellishments. The basic message is surprisingly simple : love overcomes all.

This fundamental chastity pervades the whole opera. Structurally, it's very tight. In neat succession, set piece arias follow one another, allowing each singer to display his or her vocal virtuosity. Simplicity of form, allowing beautiful elaboration without blurring the purity of vision.

Lawrence Zazzo's Radamisto is superb. His tessitura isn't forced but flows well, carefully modulated and well-judged, important in a role which stresses integrity.Radamisto's extended rhapsody on honour is particularly striking, embellishments extending each word, yet flowing naturally, without affectation. You marvel at the inventiveness, but also meditate on meaning. Honour does matter, Radamisto keeps saying as he and Zenobia amply demonstrate. These aren't just "words", dwelling on them serves a moral as well as artistic purpose. 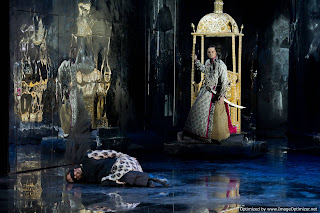 The contrast between Radamisto and Tiridate is enhanced by the counterbalance of Zazzo's countertenor with Ryan McKinny's bass-baritone. In baroque, low voices often signify villains, but McKinny doesn't overdo the inherent power in his voice. Instead he relies on subtle expression, using agile legato.  In any case, refinement enhances the role. Tiridate holds a sword poised to kill Radamisto, but the long, lyrical elaboration deflects the menace, Reality, in Handel, is deeper than it seems on the surface.
Christine Rice is exquisitely dignified and gracious. In Carmen, she seemed inhibited, and even as Ariadne in Birtwistle's The Minotaur she didn't access the kinkier aspects of the role. As Zenobia, however, she's ideal. Her patrician reserve perfectly fits the role, so she can create Zenobia's compelling beauty with her voice. Sophie Bevan's Polissena and Henry Waddington's Farasmane impressed too. And Ailish Tynan's Tigrane reached notes higher than might be expected. 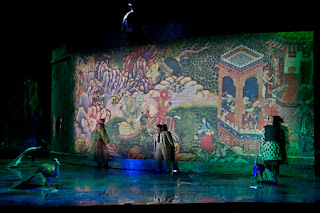 So what was my big misgiving about this production ? David Alden depicts Tigrane as a grotesque, a camp cross between Alfred Hitchcock,  King Farouk and Billy Bunter, but for no conceivable purpose. Is he trying to inject comic humour? Perhaps it works in a grubby sort of way but it jars with the noble import of this opera. The whole point, for Handel, was to edify with an example of morality beating tyranny. In itself, that's a racy concept given that Handel lived in a time of semi-absolute monarchy. Besides, Tigrane is arguably a hero since it's he who selflessly resolves matters. This portrayal is misogynistic and homophobic, completely pointless. Admittedly it was part of the 2008 Santa Fe premiere but it's still deeply offensive and should be dropped.
What Alden lacks in sensitivity, Laurence Cummings made up for with the orchestra.

A better version of this will appear soon in Opera Today.
Photo Credits : Copyright Clive Barda, courtesy of ENO.
A recording will be broadcast on BBC Radio 3 on 20 November. Sophie Bevan will be giving a recital with her sister Mary Bevan at the Oxford Lieder Festival. which starts THIS WEEK
at October 08, 2010