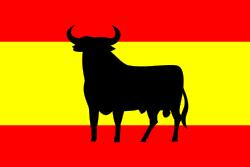 Mention "Calixto Bieito" and anti-modernists charge like enraged bulls, whether or not they know his work or even know opera. Bizet's Carmen shows how rewarding - and operatically valid - Bieito's approach can be, and a lot more "authentic" than most. My review of the ENO Bieito Carmen in London is here.

In Spain, audiences know enough about bullfighting not to be fooled by kitschy imitations on stage. Escamillo appears in full toreador garb at the right time, but the image is used sparingly for maximum impact. Bullfighting is an ancient ritual, pitting man against nature,  challenging death itself. Just like Carmen.

At Gran Teatre del Liceu in Barcelona, Bieito's Carmen is specially potent. Catalunya straddles the border between Spain and France: this is real Roma, Basque and Catalan territory. Throughout history there have always been underclasses, living on the margins. Bieito dioesn't need to "update" anything. His gypsies and townsfolk are utterly authentic. Once they drove caravans, now they drive battered old cars. The women are dressed as the poor do everywhere. When the smugglers find "flamenco" dresses, the scene becomes a game. Everyone knows it's putting on an act, not reality.

Béatrice Uria-Monzon's Carmen is a powerful figure. She wears a denim skirt, but it's embrodered and lined with satin. Like the poor dress all over the world, her friends wear chain-store tat, but Carmen references grander things. But for her poverty, she could be someone, and aspire to more. Uria-Monzon doesn't camp up the Habanera. It's Carmen's public persona. When Uria-Monzon sings Près des remparts de Séville, her voice becomes lustrous. She's revealing the true Carmen. All those tra-la-las and seduction moves are survival tactics. Only rarely can she sing  je chante pour moi-même.

Like Carmen, Escamillo lives on his wits. Erwin Schrott's face is half hidden by his hat and he uses cunning rock star moves, but the splendour of the voice reveals the depths of Escamillo's soul. Schrott exaggerates the Gallic snorts, which is good: it highlights the wildness of the character, creating Escamillo as if he was a bull. a powerfully animalistic icon, bursting with energy. The singing comes in short bursts, sudden dramatic turns. Just like in a bullring, where both bull and toreador must be in control, waiting for the decisive, sudden lunge.

A huge silhouette of a bull dominates the staging in Act 2. No need for a literal inn, because Spain itself is a smuggler's den. The silhouette is the Osborne Bull, the famous billboard scattered over the landscape so much that it's become a symbol of Spain. Yet it's an ad for a company with English roots selling Spanish products to Spaniards, and Catalans are fiercely independent-minded. A male dancer creates a wonderful tableau in the darkness, stripping off symbolically, dancing with the grace of an animal. He's both bull and toreador, bending his arms inward towards his chest, the way a bull is skewered. Incredibly poignant.

In the first orchestral interlude, a young girl imagines herself as a dancer, and props up her (blonde) Barbie Doll. She's so young, yet already she's buying into the seamy side of life, because that's what girls have to do in these situations. She'll end up corrupted but what choice does she have? Frasquita and Mercédès sing of marriage as an escape, but Carmen knows it's an illusion. Perhaps it might be shocking to some that the child choruses here include young girls well on the way to prostitution. But that's a fact of life in extremely poor societies (and rich ones too). Why should people be horrified by seeing such things on stage when reality outside is even worse?

If anything, Bieito downplays the sexuality, for sex here is a business transaction like any other. He's interested in the wider implications. First the Osborne bull and its connotations of economic colonialization. Then there's a blonde tourist, sunning heself, nonchalantly ignoring the poverty-stricken masses behind her. In Britain, these levels may be missed, because Bieito doesn't force them too explicitly. But in Spain, and in Barcelona, audiences know what they mean. Again, why be shocked when reality is so much more brutal?