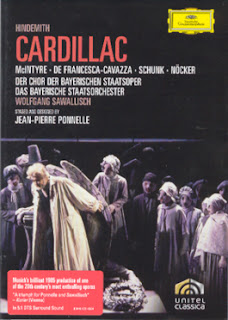 Franz Welser-Möst conducts Paul Hindemith Cardillac at the Wiener Staatsoper. Read about it on the exceptionally good blog Likely Impossibilties. It sounds good! So I watched again the DVD from Munich 1985 conducted by Wolfgang Sawallisch, with Donald McIntyre as Cardillac.

Cardillac is a goldsmiith. He loves gold because it shines in dark mines and can be moulded the way he wants it to be. He isn't letting anything he can control slip from his grasp. Even if he has to kill his customers.

Nominally, the action is set in Ancien Régime Paris where the King controls everything, just as Cardillac controls gold. Which gives Hindemith a chance to shape a subplot that's pointedly modern and political. The townsfolk are a mob, easily manipulated both by Cardillac and  Gold Dealer, his treacherous crony. The mob tear Cardillac apart in murderous frenzy. In Jean-Pierre Ponelle's  production, the townsfolk are anonymous, masked and dehumanized, vaguely like inmates in a lunatic asylum.  They're dwarfed by the towering set behind them, a cityscape that looms above them menacingly.

The rich and privileged are gorgeously costumed, but they, too, are overshadowed by giant walls. The King appears on a huge white horse, which is fake, drawn along on a plinth. He's a control freak, who brags about melting people on slow flames and mounting them with pins. Not so different from Cardillac and his creations.

Watch out for Doris Soffel's wonderful performance as the Lady, dressed in Art Deco exotic silver and fur, hair like a lioness. She keeps giant toy lions and tigers, for she herself is caged in a kinky S&M relationship (control again!) with The Kavalier (Josef Hopferwise). Cardillac kills them when they're in flagrante.

Meanwhile Cardillac's daughter (Maria de Francesca-Cavazza) wants to get married but is scared to tell the old man, knowing how possessive he is. |When the Offizier (Robert Schunk) asks for her hand, Cardillac isn't at all perturbed. All he cares about is gold. Women, he sings, can't be controlled, so they're worthless.

Hindemith's music in the scene between father and daughter pits two different musical lines in cross-currents. Throughout the opera jagged lines race against each other, rarely meeting. No unison in this madhouse. Long orchestral interludes which march one way, down another. There are even hints of military marches, quite apt for an opera written barely 8 years after the Fist World War which was much more disruptive in Germany than in Britain.

Lots of anti-religious hints too, odd for someone like Hindemith, so inspired by liturgical art. "Here I stand" sings Cardillac, defiant, like some mad Martin Luther. In this production, Cardillac's workshop is festooned with gigantic jewels, like a cathedral. Shapes of clear glass look like huge diamonds til you look closely. They're coffin shaped, within each a golden shape vaguely like a rotted corpse. Cardillac is cornered in a graveyard. While the chorus sing one line, he sings another in response, like responses in a Mass. Here. he stands against an angel on a headstone, so her wings seem to sprout from his back.

The ending is equivocal too. As the crowd carouse in the background the two-way cross-currents become three. The daughter joyfully sings of freedom. The Offizier hints that he wants to possess her totally, without question. Although he tells the townsfolk not to judge Cardillac too harshly, is the Offizier a hero? Perhaps this production is hinting that he, too, may turn into a psycho like all the rest. He wears a helmet-like white wig, his makeup a ghostly caricature, like the mob, though he doesn't wear a mask.  He halts the mob and explains, "Er war das Opfer eines heil'gen Wahns" (Cadillac was a victim of a Holy Madness)

As the crowd yell, Cardillac's going back into the earth, where his gold came from. While the crowd intone fairly conventional hymnal chorus, and the Daughter sings soaring scales, the Offizier sings what sounds oddly like plainchant  Ein Held Starb, up and down the octave. Later, he says he envies Cardillac, returned to peace.What is Hindemith getting at? Is Cardillac's madness some kind of ritual, more akin to alchemy than jewellery? Is he an Artist whose work is more precious to him than life, and murder justified? Or is it simply that kindness and love defeat obsession? It's an ending that opens up as many questions as it answers. Thank goodness the opera is being staged more often.

Please see my other posts on Hindemith and stagecraft.
at October 20, 2010