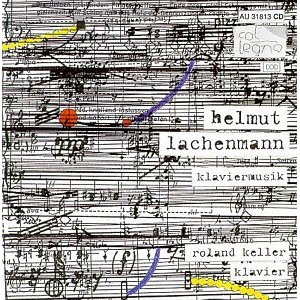 One of the South Bank's glories is its committment to new music. This Helmut Lachenmann weekend perhaps mattered even more than other such retrospectives.  Here we had the composer himself, playing Ein  Kinderspiel - something never to be forgotten.

Lachenmann's music operates on different levels. On audio recording you hear it in pure abstraction, so you connect to his ideas of inventing new ways of assimilating sound.  In live performance, you see how these sounds are made. It enriches the experience tremendously. Now, listening to the audio you're freed from thinking "how" so you can assimilate the sounds on a deeper level. As Lachenmann told Ivan Hewett, music is the "friction between structure and listener", which I think means sounds become music when the listener is mentally engaged.

Lachenmann's music most certainly isn't attention deficit. Indeed, the audience's concentration during the minimalist String Quartet no 1 (Gran Torso) was so intense it was almost palpable. Just as well. The tiniest sound counted, single notes, less than chords, so delicate that they would be missed if you weren't alert to their presence.  "Opening your ears in another way", said Lachenmann. The object is to consider what music "is" by thinking about what sound does. Many of the techniques the Arditti String Quartet uses probably don't have formal terminology. A violin makes a different sound when tapped at different points on its inner curve. Different individual violins make different sounds. Individual strings are caressed, or brushed and even bowed. The wood itself "sings". Lachenmann opens up new possibilties, new ways of hearing instruments we think we know. 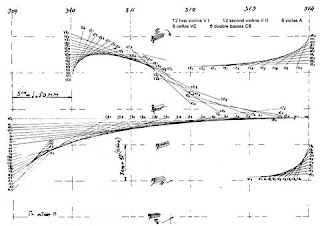 In String Quartet No 2 Grido, Lachenmann is using sounds sculpturally. Shapes defined aurally, constant moving, sounds creating structures out of silence. A wonderfiul "plane" of sound, turning and moving. I thought of Xenakis's drawings for the Philips Pavilion, where physical structure re-defines space. The art is in the concept. Whatever the image doesn't matter as long as the listener responds.  Spirals of sound that move and vibrate. Repetitions that develop almost into fragments of melody, suddenly cut off with a single chord.

Then Lachenmann plays Ein Kinderspiel. Extreme simplicity. "My 7 year old daughter can play the basic theme" he says. Going back to basics, exploring the idea of making sounds, as if discovering a piano for the first time. Simple repetitive acts, one key pressed, one pedal used to create mysterious hum. Again, new possibilties - beating the wood, relating keys to the core of the box, rethinking completely afresh. And it is music, playful and adventurous while making a profound point. The sense of wonder, the naturalness that Lachenmann creates is magical.  Just as Kurtag's Játékok was written to show how much fun music-making can be, so should Kinderspiel be an exercise, not just for the young but for any musician who's become jaded and needs to reconnect to that spirit of creativity. .

Oliver Coates played Pression, for solo cello. Simplicity again, but very deceptive. Extreme precision needed, for pitch and duration keep redefining themselves. Made me marvel at the discipline of the Arditti Quartet, each a soloist but perfectly attuned to each other. As in life, purity in music is harder to achieve than it seems on the surface. Yet from this simplicity. Lachenmann achieves fascinating timbres and vibrancy. Pression is so interesting that by comparison, Toccatina for solo violin is less challenging, even when played by Clio Gould, long term star of the London Sinfonietta, and more besides.

Rethinking what Lachenmann calls "the anatomy of sound" works with abstract music, because music isn't confined to western cultural tradition.  Once I heard two pygmy girls in Africa improvising a wordless tune, incredibly beautiful and pure. Text doesn't need to have meaning but voice anchors sound in a complex way.  Using voice as an instrument does work, it's nothing new. But Lachenmann's Got Lost didn't work for me because the use of voice wasn't skilful.

No discredit to Sarah Leonard whose voice went through a gymnastic work-out. It's probably that Lachenmann isn't naturally a voice person. Voice uses the mouth, but its sound comes from deeper within.  You can't dissect a singer's lungs the way you can dissect a piano. Popping cheeks, blowing noises, growls etc. rather than the use of vocal chords and vibration.  Oddly enough, this isn't so far from the use of voice solely as coloratura display. Which says something about meaning in song. It's amusing as a game (see Cousin Emmy who does the same thing on a more basic level) but Got Lost doesn't do much for voice. The piano part, played by Rolf Hind,  is much more inventive.