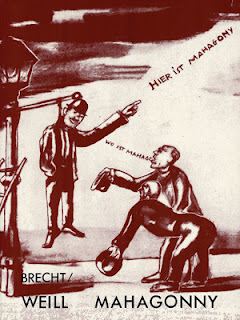 La Fura dels Baus's Rise and Fall of the City of Mahagonny at Teatro Real, Madrid is so raw and savage that it hurts. Which is exactly as it should be.

Bertolt Brecht and Kurt Weill were writing to shock. What could be more pertinent today than a parable of greed and depravity, where the worst crime  a man can commit is to have no money?

Mountainous piles of garbage on the stage, the "desert" the desert of the soul. From the trash emerge strange, half-human creatures. But this is realism. All over the world municipal dumps are where the destitute end up, scavenging an existence from the detritus the rich throw away. Brecht could not have found a better metaphor for the End of Capitalism.

From this arises the City of Mahagonny, with a Rich Man's Hotel. The rubbish piles are covered with green baize but  something's clearly unnatural here. In Spain the image has extra kick, given that huge parts of the country are devastated by irresponsible tourism. Despite cheap alcohol and sex, people keep trying to leave. Even simple Alaskan woodsman Jimmy Macintyre (Michael König) knows that something's wrong if things are too easy.

Superb choruses, too. The "chorales" were extremely well done. Everyone knows the "jazz" references in this score but the Madrid chorus understand how much deeper the cultural references go. This is a story where good and bad compete and bad wins. Even God gets trumped. No illusions here that Mahagonny is a "musical". It's cosmic, an atheist struggle of life and death with the brutal message: You Can't Help a Dead Man.  The implication is, do something before it's too late. It's actually an advantage that the chorus are Spanish, they try harder to articulate.

Michael König is an unusually deep Jimmy, by no means a buffoon. After all, he's the central protagonist. His friends swallow the delusion, but Jimmy does his own thing. Hurricanes don't scare him, the real danger is Man. It's because he's been kind to Alaska-Wolf Joe that he loses everything and is condemned to die. König's Jimmy is much stronger than he lets on, which gives logic to the Final Act.

In a world where "you make your own bed, and choose to stand up or be kicked", he's killed. But he has stood up for his principles, and has "kicked" because he hasn't compromised his innate decency. If he's trapped in the upside down morality of Mahagonny, he can take his leave with dignity because he, unlike everyone else, hasn't sold out.  Wonderful performance - a model for others to learn from.

Measha Brueggergosman is magnificent as Jenny Smith. Few singers have stage presence like she does - once seen, never forgotten. Indeed, she's such a strong personality that it might have inhibited her being cast in mainstrean roles, but her voice has a good range and she has the ability to slip into charcter well. More, please!  Her Jenny operates on several levels at once. "Eine Frau ist keine Tiere!" the words go, but this Jenny moves like an animal, ever vigilant. After all, she's in a jungle where you kill to survive. That ultra-tight bra must have been uncomfortable to wear but that costume fits the persona if not the person. This Jenny's restrained, held in too tightly because she doesn't really know how to "kick" like Jimmy does. The dynamic between König and Brueggergosman is superb. Here Jimmy and Jenny really are a pair, though Jimmy's way ahead emotionally.

Willard White as Trinity Moses is superb - when he takes his clothes off he reveals the physique of a man of 35! He, too, has commanding stage presence: vocally no fancy bits in the part to distract from his menace.  Donald Kaasch's Fatty the Bookkeeper's a thuggish creep, but he, too, has hidden depths. When he takes his shirt off, on his back, there's a magnificent tattoo of an Eygptian God of Judgement. Jane Henschel's Leocadia Begbick looks like a sweet old lady, but watch her eyes slant and glint! Good cameos, too - watch out for John Easterlin (Bank Account Bill) and Otto Katzameier (Jack O'Brien).

Interestingly, the production seems to have been designed around the performance space in Madrid, with relative small floor area but seven tiers rising above. The live audience would have had a lot to look at, but the filming was rather less effective. I couldn't believe it when a camera jerkily panned toward a detail of architecture at the beginning, and shot it out of focus. Surely that was the crest of the Royal House of Spain? I don't think the cameraman meant anything by that. Fortunately there were cameras placed in the rafters to capture the piles of rubbish looming high above the singers. The Metropolis of Mahagonny as Tower of Babel wrought in trash.

The Final Scene shows the cursed people of Mahagonny. Having chosen not to follow God "but their own way", they march with banners on which slogans are written. I don't know Spanish, but in Brecht's original the slogans are both militant and ironic. There's no easy answer to the dilemma of modern capitalism but the main thing is to respond.

Since this was filmed, there'll probably be a DVD, in which case, grab it. La Fura dels Baus led by Alex Ollé and Carlus Padrissa, staged Ligeti's Le Grand Macabre at ENO. Who can forget the gigantic woman, used and abused by all, yet looking outwards with dignified vulnerability? The production reached levels  the opera didn't access: in New York without staging, the full impact might have been lost. Almost certainly, there'll be many eager to reject this production because of the rubbish dump, simulated sex and pig trough orgy, but maybe they should stick to West End feelgoods instead. This Rise and Fall of the City of Mahagonny packs a punch, and can't be ignored. Just what Brecht and Weill would have loved.
at October 01, 2010