Wagner Parsifal at Bayreuth: always a place of pilgrimage. But would Wagner himself have prefered po-faced reverence or thought-provoking engagement?   Wagner didn't do "pretty pictures". Of all his oeuvre, Parsifal is the epitome of an ideas-opera, where abstract concepts are central to the action. It is a medieval mystery play, writ large.  But what abstract concepts?  Religiosity or true religion? Formula or genuine faith?  Parsifal has acquired a veneer of  religiosity because audiences assume that an opera with Good Friday music and semi-religious symbols must somehow be "Christian". Yet the theology of Parsifal is thoroughly unorthodox. The Grail concept pre-dates Christianity and lives on in legends with marginal connection to what we know of the Early Church. The Knights Templar did exist but were ruthlessly suppressed. And that's even before we get to Klingsor and Kundry.  Take Parsifal at face value, and miss its true challenge.

Controversy! Parsifal with Muslims! Uwe Erik Laufenberg's new production for 2016 confronts received wisdom, so at first it shocks. But as with many new ideas, deeper consideration yields insight. The Knights Templar were a military order, created to drive Muslims out of the Holy Land.  So much for "Love thy neighbour as thyself".  Jesus wouldn't have been a part of this community. Connecting Parsifal to Islam is not nearly as scandalous as it might seem. In these times of hate, ignorance and intolerance, we need to rethink fundamentals and second-hand assumptions. Again and again, Wagner writes "Durch Mitglied wissend...."  ("Through Compassion, knowledge".) Images of water and purity, not bloodshed.  The Grail Community inhabit a desert, in every sense, bereft of replenishment.  Under this lovely marble dome, amidst rubble, they lie on stretchers, dying of thirst.  A light shines and a young boy appears, as does a realistic swan.  Kundry (Elena Pankratova) quietly cradles the living child, Gurnemanz (Georg Zeppenfeld) cradles the dead bird, raging at Parsifal (Klaus Florian Vogt).  A small detail, but one which speaks volumes. 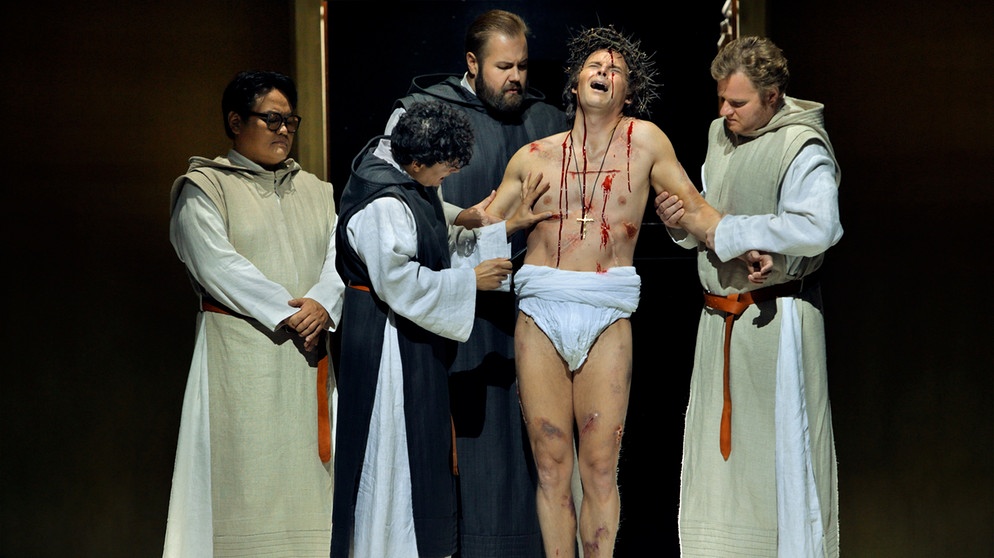 Amfortas (Ryan McKinny), fortified, appears as Christ Crucified, with a crown of thorns, arms outstretched. Amfortas is the son of Titurel (Karl-Heinz Lehner) , a semi-supernatural figure, but mortal.  Titurel's disembodied voice booms from above the stage. But what do his words mean "Muss ich sterben, vom Retter ungeleitet?" If Parsifal the saviour, who is he who is his father?  Parsifal is fascinated by who his mother might have been, but isn't much bothered by his father.  Who is Klingsor, one wonders? Whether one believes that Jesus was God made man to save the world, that is the fundamental precept of Christianity.

It's not Muslims who could be discomforted by this approach to the opera, and understandably so, too. But Laufenberg's interpretation comes from the opera itself.  How does  Parsifal (first seen with a quiff) become entranced by the faith that the Grail Community believe in, even in their own flawed way?  I don't know how this is shown on stage, but in the film of the production, the long orchestral transit is illustrated by a depiction of the universe, with stars and planets: Extremely beautiful, very profound. Although the Parsifal bells are overwhelming, they fit wonderfully with this cosmic panorama.  The Bayreuth Festival Orchestra was conducted by Hartmut Haenchen. Amfortas enters a glowing, light-filled bath.  The Knights, dressed as monks,  partake of the chalice (a Grail), in which wine has been transubstatiated into the blood of Christ.  Yet there's something very spiritual about this scne, lit in silvers and pastels. The monks embrace in fellowship. Parsifal, sitting among them, absorbs the mystery. No wonder he spends the rest of his life trying to come back.


In Act Two, the "church" is transformed into an Islamic palace, the walls decorated with blue and white tiles, a pool in the background, a symbol of the Islamic concept of Paradise as a place with cooling water.  A figure dressed in white, his mouth gagged, sits while Klingsor (Gerd Grochowski) rages.  It's Amfortas, forced  into watching his past re-enacted. Klingsor, like so many demagogues, is obsessed by what he claims to hate. Against a background of crucifixes, he holds a crucifix and rants. Psychologically telling - Klingsor wanted to be like God, but is a loser.  His realm is delusion. The Flower Maidens are seductive, but they're not real.  Burkas (symbols of oppression) transform to semi nudity.  Just as the Grail Knights hate women, so does Klingsor, which makes Kundry's role in this opera so critical. Parsifal enters, as a commando: another provocative image these days when we see armed intruders of all types on the news.  As Kundry attempts to seduce Parsifal, Amfortas and Klingsor watch from the shadows. Realizing how Amfortas received his wound shakes Parsifal to his senses.

The overture to Act Three is illustrated by a film of a pool, with palm fronds in a misty haze, a subtle but deliberate reference to Palm Sunday and what happens thereafter.  Is Kundry in hijab, or is her headcloth the kind many women the world over wear? Is Gurnemanz in monastic robes, or does his waistcoat resemble that of a man in the Middle East?  A gunman in black breaks in, but Gurnemanz welcomes him as a guest, for it is a Holy Day. The gunman plants a cross into the ground. It's the long-sought spear that caused Amfortas's wound.  Wonderful acting from Georg Zeppenfeld, who portrays Gurnemanz as a mellowed old man who cries at the thought of Titurel's death.  I was rather less convinced when the set opened out to a vista of forests and waterfalls, with dancing nymphs - the Flower Maidens made pure? - but in a production with many other good ideas  a misfire like this is forgivable.  In any case, Wagner;'s stage directions refer to to a Quelle, grasses and Blume auf den Auen.  Mitglied !

This tender, almost domestic interlude serves to highlight the power of the Mittag music. Through rising clouds we spot the visage of Richard Wagner with a wry smile, and then see a marvellously clear shot of a church bell, while the Parsifal bells ring out.  Then we're back with the monks. Amfortas opens Titurel's coffin, but all that's left is dust. "Mein Vater". "Ein Mensch, wie alle" as Gurnemanz had earlier described him. Parsifal brings forth the spear, diguised as a cross.  Vogt's voice rings forcefully, but clear and luminous,  haloed by the orchestra.   Vogt is wonderful, the Parsifal of our times. "Oh! Welchen Wunders höchstes Glück!", his voice rings up as he holds the spear, which he then places in the coffin.  Amfortas removes his cricifix and throws it into the coffin. You can see why many would be discomforted by this, even they could cope otherwise. The monks and other men join in - possibly Muslims, wearing tunics and caps - placing precious objects beside the spear. Literally "burying the hatchet". This, not baptism. or any specific Christian rite, is the Höchsten Heiles Wunder! Erlösung dem Erlöser!

This new Bayreuth Parsifal might take some time to get used to, but it's well worth the effort since it's true to the libretto and to the deeper meaning of the opera.  It's not Christian. Mitglied is universal.  It also marks a new departure for Bayreuth, burying at least some of the bigotry of the past.
at August 25, 2016