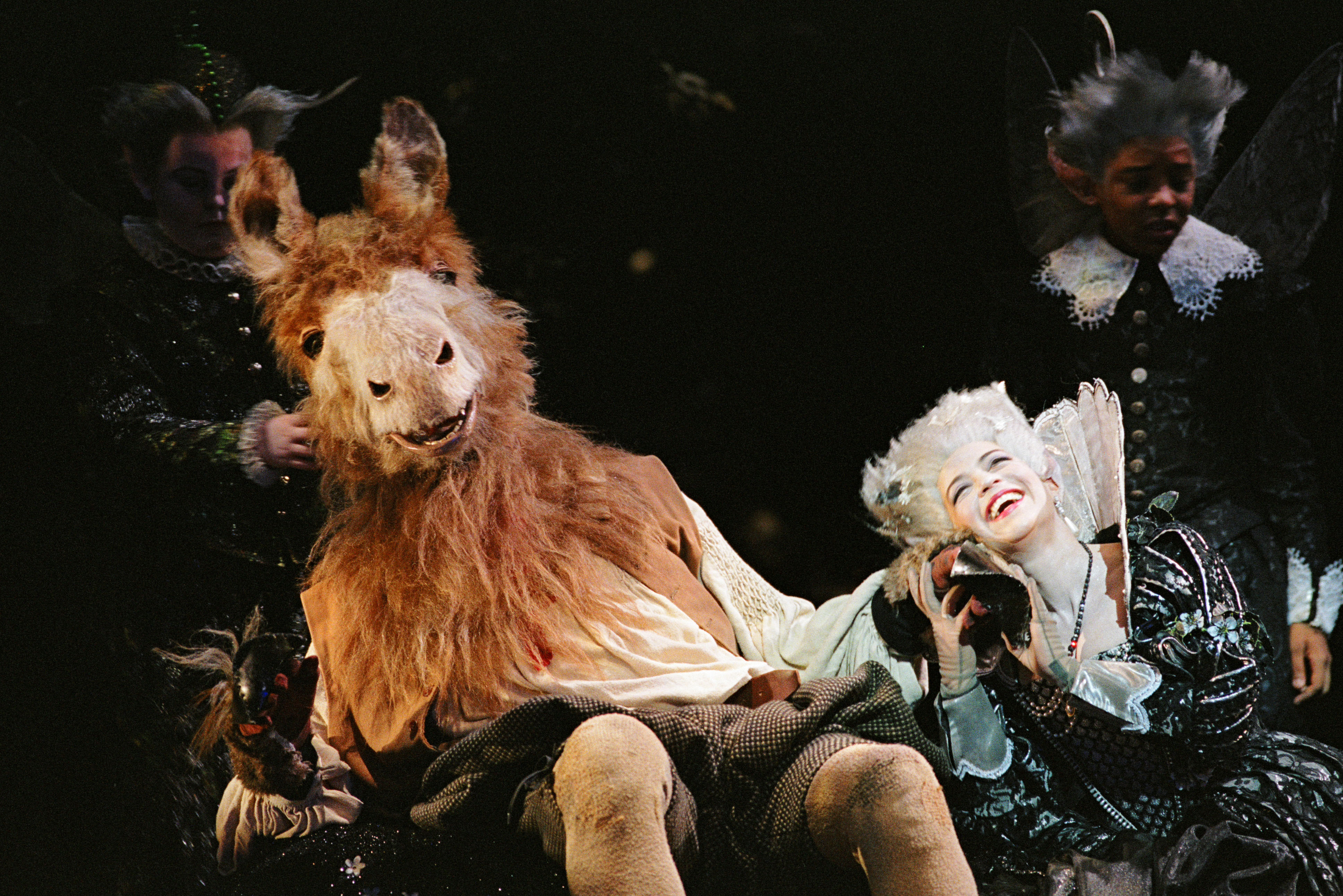 At Glyndebourne, Britten's A Midsummer Night's Dream,  in a performance so good that it was the highlight of the whole season, making the term "revival" utterly irrelevant.  Jakub Hrůša is always stimulating, but on this occasion, his conducting was so inspired that I found myself closing my eyes in order to concentrate on what he revealed in Britten's quirky but brilliant score.  Eyes closed in this famous production by Peter Hall, first seen in 1981?  The First Act takes place in dense forest, at night, when nothing is as it might seem. Do we see trees or projections thereof, or both?  What do the shadows conceal, even when the moon slips  fleetingly through clouds?  John Bury's designs are immortal because they are so abstract, and surprisingly "modern", though they ostensibly resemble the well-known Victorian painting by John Noel Paton - another reversal of visual imagery.  Since
Shakespeare's  A Midsummer Night's Dream operates on so many simultaneous levels, the one thing to be wary of is literal realism.

How Britten must have relished the opportunities to express in music what could not be said in words. Like Shakespeare, Britten was poking fun at a world that mistakes power for virtue and convention for truth. Theseus and Hippolyta –  ancient Greeks in Elizabethan costume  – sneer at the Mechanicals' play. But perhaps the joke is on them.  A Bergomask before bedtime might just have unforeseen consequences. Britten's Gloriana was long misunderstood by audiences who took it at face value. (Read my article : Gloriana : Britten's Mock Tudor).  A Midsummer Nights Dream, written barely seven years later, has an infinitely superior plot and the music is much more sophisticated, but there are parallels. And in A Midsummer Night's Dream there are levels which would have had personal resonance for the composer.

Jakub Hrůša's conducting is so idiomatic that we can almost feel the caustic bite of Britten's humour, while also feeling the pain that lies beneath the surface.  Britten's score sparkles with variety.  Figures shape shift as swiftly as they are delineated, Elizabethan forms pop up from the endlessly elusive and very contemporary stream of consciousness   Hrůša doesn't smooth over the spikiness, but keeps the pace animated, so the orchestral playing seems to fly free, like the Fairies – the Elementals to the earthbound Mechanicals.  The moments of reverie glowed, the lower woodwinds and brass breathing ominous mystery. The London Philharmonic Orchestra seem to shine for Hrůša, even more than they usually do. Perhaps Hrůša brought insight from having conducted Rusalka and The Cunning Little Vixen at Glyndebourne in the past, two operas which also have close affinity with A Midsummer Night's Dream.  Hrůša seems to intuit how pertinent the variety in the score is to the meaning of the opera. Everything changes at the turn of a point, themes transform, like magic, nothing can be taken for granted. Because Hrůša  got such alert, taut playing from the orchestra, he could bring out the innate anarchy beneath Britten's elegantly defined orchestration.  Orchestrally, this was an exceptionally vivid performances, so strong that it will live in the memory. 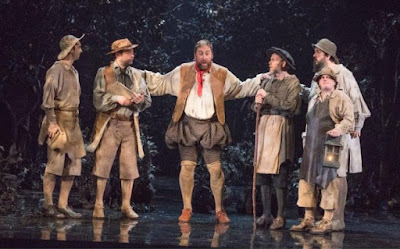 The cast, acting as well as singing, were of an equally high order.  Matthew Rose first sang Bottom ten years ago. Now, he's matured and so has his characterization of the part, which will probably now be hard for anyone else to improve upon. Bottom is Everyman but no fool. Rose's voice carries authority, which is why his friends turn to him as leader. Even with the head of an ass, and his bottom in the air, Rose makes the part dignified and sympathetic. Rose creates the "donkey" wheeze in Bottom's lines sound so natural that, even in the palace in the final Act, a bit of donkey-ese breaks through irreverently.  Even his body movements worked in synch.  Equally strongly cast were the Mechanicals – David Soar (Quince), Sion Goronwy (Snug), William Dazeley (Starveling), Anthony Gregory (Flute) and Colin Judson (Snout). In ensemble, they were superb, singing and speaking as if to the manner born.  In the play, and in the opera they are much more significant than Theseus (Michael Sumuel) and Hippolyta (Claudia Huckle).

But Puck is the agent of insurrection, upon which the plot turns, and particularly symbolic for Britten himself.  Puck is not a singing part, but  David Evans stole the show, quite an achievement for an actor stepping in at short notice,  into a part that's so demanding that it's notoriously difficult to cast.   Britten dreamed that it could be played by a young athlete whose voice was beginning to break: a changeling between two worlds, a Britten innocent on the cusp of corruption.  Tadzio, with a voice. And what a voice! Evans is cheeky and shrill like a boy, yet also rebellious and assertive like somone passing into his teens, though he looks younger. He also projects with great force, while respecting the curious rhythm in the text.  Evans runs up and down stage, sailing into space on a guy rope, popping in and out of the scenery, without missing a note.  Did Britten identify with Puck, who could get away with things a nice, obedient boy like Young Ben could not?  And yet Puck is a tragic figure, not so much because he doesn't belong but because his freedom cannot last. Will he be sucked into Oberon's sick games? Evans will grow up, but this moment of glory will live with him for the rest of his life.

This review appears in Opera Today 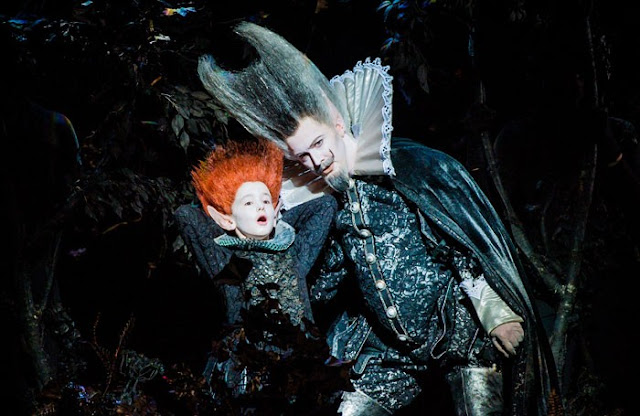