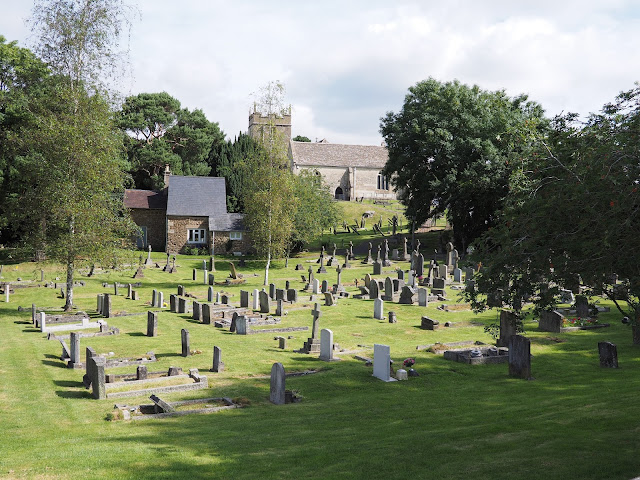 On Chosen Hill,  in Churchdown outside Gloucester, in summer.  Chosen Hill is one of those "power spots", like Wearyall Hill in Glastonbury, which seem to have the power to draw out positive energy.  Perhaps they connect to sites of prehistoric cosmology, to leylines or force fields or whatever; they seem charged.  For me,  it's a kind of "sacred site" with its connections to music and creativity.  Nearly every evening, Ivor Gurney used to trek up Chosen Hill from the city of Gloucester five miles below. You can still hike the path up through the wooded slopes he might have used: it's too steep to build on, and rather overgrown, but safer for walkers than  using the road for cars. 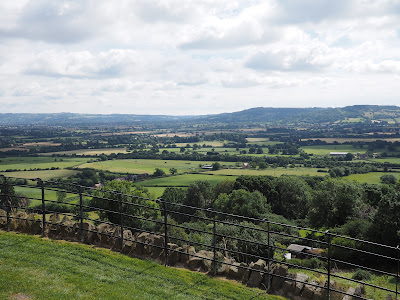 Chosen Hill isn't really just a hill, but  a hill reconstructed as a mound during the Bronze Age, possibly a fort or site of religious significance, commanding a panoramic vista over the plains and estuary.  At its summit, the Normans built what is now St Bartholomew's.  Once I visited when the slope beside the church had collapsed in a  landslide.  The church was cordoned off, "Danger" signs warning people to keep away from the crumbling cliff.  When you're young, you think you're immortal, so I climbed over,  peering precariously over the buttress and looked at the exposed foundations.  Now the area is restored, and safe, and there's even a bench where you can sit and look out towards the ocean, but on this last visit, I got stuck on the steep grass verge where you're not supposed to walk. Luckily, I was saved – ordinary people can be guardian angels when they are in the right place at the right time.

In the early 1920's, shy, repressed city boy Gerald Finzi visited the Cotswolds for the first time. He met up with Detmar Blow and other arts and crafts types, who introduced him to exotic things like yoghurt and alternative living.  In the 1930's Finzi and his wife Joy, who knew herbal lore, set up Ashmansworth (near Newbury)  as a haven of natural self-sufficiency.  Decades later, when  Daniel Barenboim visited Jacqueline du Pré (Hilary Finzi's sister), he was horrified  by their hippie ways! 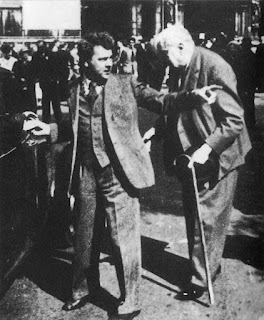 But first, back to Chosen Hill.  Below the church is a tiny cottage, low slung, almost invisible from the road. On New Year's Eve, 1925, Finzi went to a party there.  At midnight, the guests came outside, into sharp frost, the night sky filled with stars, and "heard bells ringing across  Gloucestershire from beside the Severn to the hill villages of the Cotswolds". Stephen Banfield, Finzi's biographer, calls this the "hilltop epiphany", for it released in Finzi a surge of original music. This was the inspiration for In Terra Pax and Nocturne whose sub-title is in fact New Year's Music, filled with bells and joy. Finzi needed an impetus to find himself and something happened that night under the stars. "I love New Year's Eve," he told a friend later, "Though it's the saddest time of the year..... a time of silence and quiet". And soon after asked himself "must knowledge come to me, if it comes at all, by some awkward experiment of intuition, and no longer by the familiar process (of reading other's work)?" ie,  Finzi was learning to trust his own artistic instincts.

Chosen Hill remained so dear to Finzi that in 1956 he took Ralph Vaughan Williams up the steep hill.  Presumably they drove in Finzi's big 50's car, since RVW was 83.  There are several photos of the two composers taken that week outside Gloucester Cathedral, where they were attending the Three Choirs Festival. The new tenants of the cottage in the churchyard had young children who were suffering from some childhood malady. Finzi's  immune system was weak, as he had cancer. He caught the children's illness, and three weeks later died in the Radcliffe Infirmary in Oxford.  For Finzi, Chosen Hill marked a beginning and an end.  For me, being there this summer was also a kind of pilgrimage.  How blessed I felt! Please read my review of Mahler's Symphony no 8 at Gloucester Cathedral, highlight of this year's Three Choirs Festival. 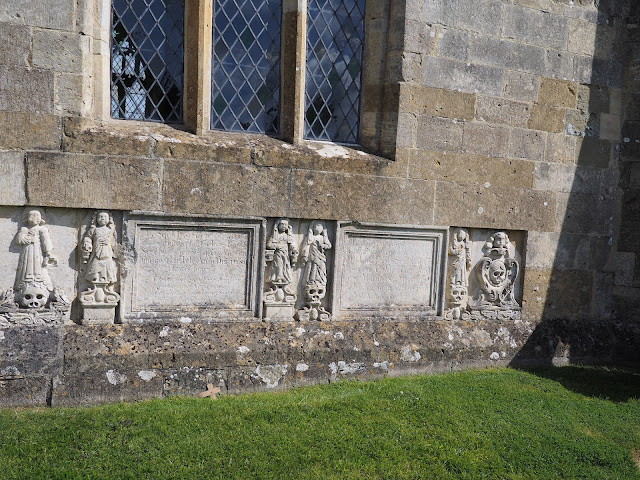