Thunderstorm the opera Shanghai comes to the ENO

At the Coliseum,  home of English National Opera, Thunderstorm.  The opera is based on the play  Thunderstorm, (雷雨) by Cao Yu ( 曹禺, 1910-1996)  which is an iconic classic of modern Chinese literature, so influential that you need to know it to understand modern Chinese culture. So catch the opera, which the Shanghai Opera House is bringing to London from 11th August. The first night is nearly sold out downstairs but there are three other performances.  The opera reflects the spirit of the play ,which depicts a Chinese household in a time of social transition. This is not a traditional Chinese opera, but, like the play, a "western" piece with music that's recognizably Chinese but acknowledges other influences including modern Chinese song, a distinctive genre which flowered at the time the original play was written, and thus is very much relevant to the meaning of the opera.  In China, the division between high art and popular culture isn't as entrenched as it is in the west, since all "modern" art was cosmopolitan, reflecting  social change. 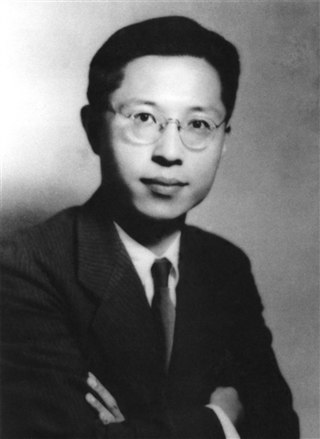 The opera, written by Mo Fan in 2000,  which is on DVD though in a different production, also reflects the original play with its clean "art deco" aesthetic, so evocative of China in the period up to the time of the Japanese invasion.  Zhou Puyuan, the patriarch, has made his money in mining, the "growth industry" of the period, facilitating industrial change. In feudal China, opening the earth and building railroads, ie modernization, challenged superstition. Thunderstorm is thus an allegory of early modern China.  Hence its immediate and enduring success and its significance. Photo at left is the playwright Cao Yu at the time the play was written.

There have been at least four film adaptations. The first, made in 1938, only five years after the premiere of the play, made by Hsinhua Studios in Shanghai, is a masterpiece in its own right. The remake in 1984 is also extremely good, and includes English subtitles.  There is also a version from 1955, starring the teenage Bruce Lee. This colonial-made version downplays the radical aspects of the drama,  a self-censorship which is in itself rather telling, though the reasons for this are beyond the scope of this short post.  The fourth film version, also in Cantonese, from 1960,  isn't quite as good.

Why "Thunderstorm"? The action takes place in oppressively hot weather, evoking tension and foreboding. The Zhou family live in a grand western-style mansion. Rich as they are, they don't own the house, and have moved many times, each time taking with them the ornate and over-cluttered furnishings.  Hint! This is a symbol of the malaise that affects the family.  In contrast, the young maid Sifeng is innocent and eager, and, as the original stage directions make clear, voluptuous and fecund. Thus the youngest son of the family, Zhou Chong, is drawn to her and wants to split his school fees with her so she can get an education.  Sifeng and and Chong represent the "New China" – vigorous and full of hope.  Sifeng's father, Lu Gui, warns her that the house is haunted. He'd heard voices in the living room, and  Mrs Zhou, Fanyi, (Chong's mother) is a reclusive neurotic.  But is her illness physical?  Something is very not right in this house. There's trouble at the mines, too. The workers are on strike.

Zhou Puyuan thinks Fanyi can be cured by traditional medicine. She knows better. She's desperately unhappy because she realizes that her stepson, Zhou Ping, who is almost  the same age as herself, wants to leave the house.  Fanyi and Ping had a brief affair, but now Ping is in love with Sifeng. Fanyi knows something Ping doesn't know, though. She invites Sifeng's mother, Lu Shiping, who lives far away, to visit.  Why would the mistress welcome a servant? Why does the servant recognize the furniture? Who is the beauty in the old photograph Zhou Puyuan keeps in his study?  And why is Lu Shiping so angry that her daughter is working in this household?

Zhou Puyuan and Lu Shiping both lived in Wixi when they were young. Zhou  asks if she knew where his first love was buried.  Zhou has never got over his first love, but can't recognize her standing right in front of him. She's grown old and careworn. She was thrown out of the Zhou family by Zhou's father, a conservative for whom a marriage across social classes breached rules of propriety.  Zhou Ping is Shiping's son, but he doesn't know.  Zhou Puyuan also doesn't know that Shiping had a second son by him, born after she was thrown out.

Trouble erupts at the mines. The strike leader confronts Zhou Puyuan.  Zhou Ping defends his father but little does he know, he and the strike leader are full brothers.  Sifeng and her father know that the striker, Lu Dahai, is Shiping's son, so they leave, too.  The thunderstorm erupts outside, but no raincoat or umbrella can keep anyone safe in this deluge.

As thunder crashes and lights up the dark, Ping and Sifeng announce that they're eloping.  Sifeng is already pregnant. Lu Shiping reacts with horror. History is repeating itself, and in this case, compounded by incest.  Sifeng runs out into the storm and is struck by lightning, Chong follows and dies, too, and Ping shoots himself in despair.  A house divided by injustice cannot stand, shameful secrets cannot remain unexposed.  If we don't learn from history, we are lost. Although the story is melodramatic, it';s not hard to appreciate why it had, and continues to have, such powerful appeal.  When my school produced the play in the 60's,  it shocked many, not because of the incest and infidelity but because of its deeper social and political meaning.  Although  the play wasn't translated into English until 1958, Chinese audiences knew what it was all about, and why it was important.  .
at August 10, 2016