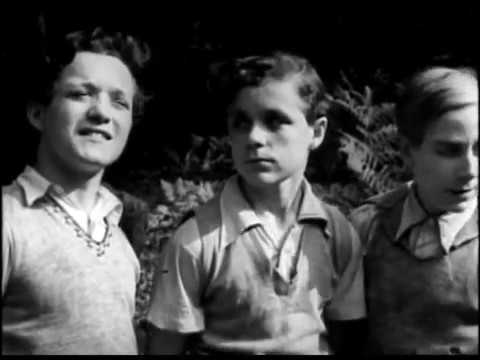 Nothing Venture, NOT "nothing ventured". What is a "nothing" venture ?  Perhaps the title is meant to be ironic, since the film is a  fantasy. An old man is writing, correcting his words as he goes "It was a lovely day in June, when three boys, funnily enough  named Tom, Dick and Harry were walking across the sand between Penforth and Bywater, looking for adventure"  Out of nowhere the boys pop up. "We heard you were writing a new book and thought you'd like to include us in it again".  So this is a surreal world which exists in the imagination, as if frozen forever in time. So much for the sentimental nostalgia, laid on with a shovel.  It's not reality, even though it resembles an idealized England that a fortunate few were lucky enough to experience, for a time. This film was released in 1948 by British Lion and Elstree Independent, and made in Viking Studios of Kensington. None of which now exist  But boys of a certain vintage will swoon, transported back to childhoods long past. Delicious escapist dreams!

Tom, Dick and Harry were acted by "The Artemus Boys", Philip, Peter and Jackie, who may or may not have been brothers, since they don't look genetically related, and speak with wildly differing  accents  One is  definitely northern, with vowels as wide as the horizon, though the story is set somewhere on the south coast (Penforth and Bywater don't exist in the same vicinity). But Tom, Dick and Harry cycle off on gearless bikes, through a quaint old town, through fields and  up steep hills, to a tower with a view over several counties, approached through Norfolk Island pines   The boys overhear some men discussing "the Boss"  Just as villains in Enid Blyton are easy to spot because they're not white, these men must be villains because they drive a big car. What are they doing in this remote spot?  Is Michael, a "flatfoot" in a trench coat on their trail?  If so, why is he whistling loudly so all can hear ?  Fortuitously, a lady gets knocked off her horse and Michael drives her and the boys back to her place, Diana's extremely wealthy, and a horse breeder, but she and Michael, rather too posh to be a cop, hit it off "This isn't going to turn into a love story? says one of the boys squeamishly.

Michael, Diana and the boys head off to SoutHEMpton (Diana's accent),stopping off first in a fancy hotel,with a dance band. The two older boys wear tuxes They can''t order food – the menu's in French.  The younger boy gets a job as a busboy to spy on the villains, who are staying in the hotel. Next day, they're down at the docks, where the Queen Mary is docking. Great scene, artistically shot, with music that sounds like parody Elgar though it's the best part of the whole soundtrack  The villains are smuggling a secret weapon. The stiff upper lip earnestness is a satire on the militaristic mindset left over from the war that's just ended, but lives on in "boy's magazines". Hence big words are spoken syllable by syllable with histrionic exaggeration.  Diana doesn't turn up at a race meeting but her horse box does. She's been kidnapped by the villains, one of whom has "ways of making people talk", because he ran a concentration camp during the war (I kid you not!)  Diana's Dad is a scientist who knows secret inventions. Luckily one of the boys followed the horsebox and scribbles a clue in chalk for the others to find   Diana and Dad head to a secret underground chamber beneath the tower   Daddy blows up the secret weapon and Diana embraces Michael. "It did turn out a love story after all"  The author reappears "Good bye old chaps, perhaps we'll meet again" The boys are sen walking back towards the horizon at the beach, whence they came.

The Artemus boys made one previous film The Great  Escapade in 1947 for the same director, John Baxter, with a script by the same writer, Geoffrey Orme, and then seem to have disappeared   Perhaps they're still around, in their 80's but they'll remain forever young in Nothing Venture.. The eldest boy  had star quality, and was very personable.  Baxter and Orme had rather longer careers, Orme writing a segment for Dr Who, in the 60's.  I loved Nothing Venture because of its tongue in cheek good humour, and the shots of a lost England,where people cycle through quaint countryside, and class divisions are entrenched, though the Artemus boys, Diana and Michael break down stereotypes  The music was by Kennedy Russell, who wrote for film. Extra ! A genealogist friend ran a search and found that there haven't been any people named "Artemus" in the UK since the mid 19th century. So, clearly a stage entity.  Pity, it would be nice to know what became of them, esp the bright one. (Subsequent thinking : Artemus is almost certainly a fake name because the boys aren't brothers and two of them clearly aren't thespian material. So who was the talented one ? Someone who can act liie should have been in movies. Compare photos of Richard Attenborough in his youth. Think about it !)

'Nothing venture' isn't a noun phrase ('[a/the] nothing venture') but a verb phrase. I parse 'Venture' as an imperative with conditional nuance, '[if you] venture nothing' - i.e. it's the first half of an archaic variant of the proverb 'Nothing ventured, nothing gained'. Thanks for writing about this lovely-sounding film, which I've never heard of. Hope it turns up on daytime telly...

A very good review; I thought the eldest boy showed potential, and wondered why we didn't see more of him. It looks like the singer has been deleted from surviving prints.

The Artemus Boys were also in the 1946 Flanagan and Allen film "Here Comes the Sun".

The "Picture Show Annual 1948" mentions them - "Three boys who were all sixteen years old at the time, became film stars after John Baxter, the film producer, had seen them in a music hall act. For two years they had been appearing on the variety stage as "The Artemus Boys," Mr. Baxter decided to star them in an open-air film dealing entirely with the adventures of three town boys in the English countryside, entitled The Grand Escapade. The boys were Peter Coyle of Newcastle ; Phillip Hartley of Hull, who before he went on to the variety stage was a page boy in a Hull cinema ; and Jack Armitage of Bradford who worked in a shutter factory. After The Grand Escapade Mr. Baxter decided to feature them in another film, Nothing Venture."

Thank uou so much for that RamblingDucky ! I've wanted for so longbtofind out more aboutbthe, IMDB gives themovie credits etc, but nothing aboutbthe boys themselves. At last ! A ladywriotebtome re. PhillipvHartley but i couldn't contactbher by email.I wanted so much to find outwhat happened to them in later life. because they were so engaging.I hope that the nhad good lives.