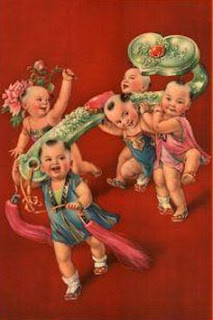 Today, the first day of the Lunar New Year, heralds the Year of the Rooster. Let's hope it's not  a cock-up like last year.  To bring good luck, people surround themselves with auspicious images, like plum blossom branches, tangerines, and calligraphy.  Symbolism everywhere !  Fish, fruit, boats and babies - all harbingers of prosperity.  But sometimes the symbolism can be more subtle, particularly in situations where being oblique is safer than being direct.

The poster at left shows infants carrying a jade object. It was made soon after the overthrow of the Qing Emperors in 1911.  The jade object is a ju-i, a sceptre carried by monarchs, symbolizing power.  The phrase "holding the ju-i" means taking responsibility.  So when the toddlers, symbolizing hope, hold the sceptre, the message is "celebrate the new Republic".  A hundred years ago, illiteracy was common, so learning was spread through folk arts like this, with symbolic meaning. New Year posters are a kind of narrative tracking  the dreams of ordinary people, mostly poor and disadvantaged. Fat kids mean there won't be famine, multiple babies mean that some, at least, will survive.  When little girls are depicted, as well as, or in place of boys, the message is the New Woman, a symbol of modern China and equal rights.  Later still, the infants are shown holding cars, spaceships and radios, new symbols of modernization and prosperity.  Of course there are propaganda elements, but for ordinary people such things meant hope. Nowadays people are so materialistic that they forget how things might have felt from the perspective of the poor. 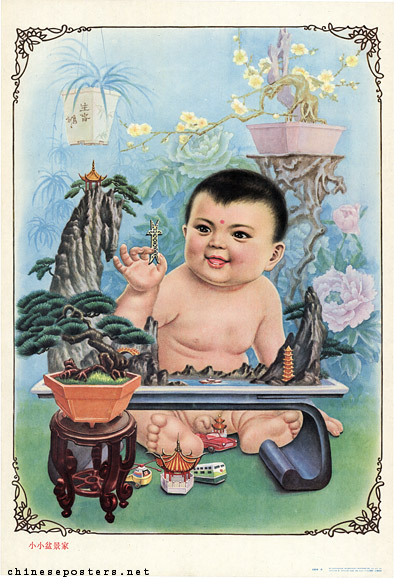 Below a poster which I had trouble "reading" but which a friend decoded. This time the baby sits playing with valuable antique objects, way beyond the reach of humble peasants. Bonsai, porcelain, peonies, lap shek and ornate carved stands - the preserve of the rich and educated. The boy is playing with a tray garden, similar to Japanese symbolic gardens where the universe is depicted in simple sand and stone.  The kid has a red mark on his forehead, a Buddhist mark of good fortune.  What we're seeing then is a celebration of traditional cultural values.  But what's he got by his genitals (in peeing distance) ? As my friend pointed out, a car, a train and a helicopter, hidden among the pavilions.  What do these symbols mean, in this context ?  There were many good reasons for Chinese people to be wary of western and Soviet encroachment.  So perhaps the poster means, "Don't rush to discard your own heritage".

Sadly this poster must have been made before the Red Guards  demanded the abolition of all culture. "Smash the Olds" was their slogan, the denial of the past, and all learning, to serve the political agendas of their present.  "Alt facts" before the term was invented. Some things don't change, east or west.