Das Eröffnungskonzert der Elbphilharmonie, the opening concert of the Elbphilharmonie in Hamburg. The building looms like a giant ship on a promontory on the harbour: a reminder of Hamburg's maritime and commercial heritage. The lower floors match surrounding buildings, while the upper floors and roof reflect the skie : an inspired concept in architectural terms.  But what really makes the Elbphilharmonie interesting is that it's a game changer in many ways, with the potential to transform the whole way the European music business operates.

"Freude" said the grandees making speeches, which is significant, for great art is inspired by joy, not small=minded negativity. The creative genius of Beethoven stood  at the start and finish of this communal celebration, with the Overture to the Creatures of Prometheus op 43 and the sublime Symphony no 9.  In Greek mythology, Prometheus stole fire from the gods to empower men, an act which symbolizes enlightenment. That's why the arts matter. They generate creativity and, with that, the enthusiasm that generates change in many things, including economic regeneration. This new hall is a landmark that could challenge the dominance of Berlin and Paris. Not for nothing, the concert honoured Johannes Brahms, Hamburg's native son, who lived in Vienna, but remained, at heart, solidly North German.  In Britain, we've no way to compete, since British arts policy favours micro-endeavour. The fact is, excellence needs vision, and commitment.  The long-term benefits to the nation are infinitely greater than can be measured in simple terms.  The drive that went into making Hamburg the major port that it is, is the kind of drive we need in the arts.

Thomas Hengelbrock and the NDR Elbphilharmonie Orchester chose a programme that demonstrated what the new building can do. The platform, larger than usual, nestles surrounded by different tiers of seating, rather like Berlin and Paris, so sound resonates more evenly than in conventional coffin-shaped halls.  Bernd Alois Zimmermann's Photoptosis (1968) tested the acoustic to the limit. Scored for a very large orchestra, the piece can be very loud indeed, but here what struck me most was the richness of sound, not the volume. The big climaxes are carefully constructed, with myriad layers of detail, some so subtle they can get lost. Yet in this hall, even the most refined components can be heard and relished.  Suddenly, the hall was plunged into darkness, small rows of lights shining from the dense gloom like stars. The plangent strains of a Praetorius motet rang out, as if being heard across the centuries. In a split second, the 16th and the 20th century connected. Also, from an eyrie above the platform, the orchestra's principal oboe played Pan, from Britten's Six Metamorphoses from Ovid op 49. Philippe Jaroussky sang Italian baroque airs, accompanied by harp, from a position above the stage, the clear, pure beauty of his voice carrying effortlessly round the large auditorium., In one of the interval clips, he's seen testing the acoustic by exploring with his voice as he walks around.  Then, Messiaen and Wagner, sounding clear and crisp. What a joy it must be for an orchestra to play in these surroundings, especially as the off-stage facilities are luxe class compared to many less generous venues. The best orchestras will now want to visit Hamburg: this superb acoustic will lift the game for everyone. Read more HERE about the technical aspects that make the acoustics in the auditorium.

For this grand opening gala, the whole Philharmonie building exterior became the backdrop for a spectacular light show. This, too, made a statement, since the light show would have been visible across the harbour. The Elbphilharmonie light show could become a feature of Hamburg's civic life, just like the way Hong Kong skyscrapers become a gigantic canvas for illuminations during the Christmas season (where the flat outside wall of the main local concert hall is the focus of a light show)  The arts aren't just for toffs. Involving the wider community outside the concert hall is a form of outreach and education without distracting from the main business of music making.  Indeed, excellence "is" education. It opens up ears and minds. 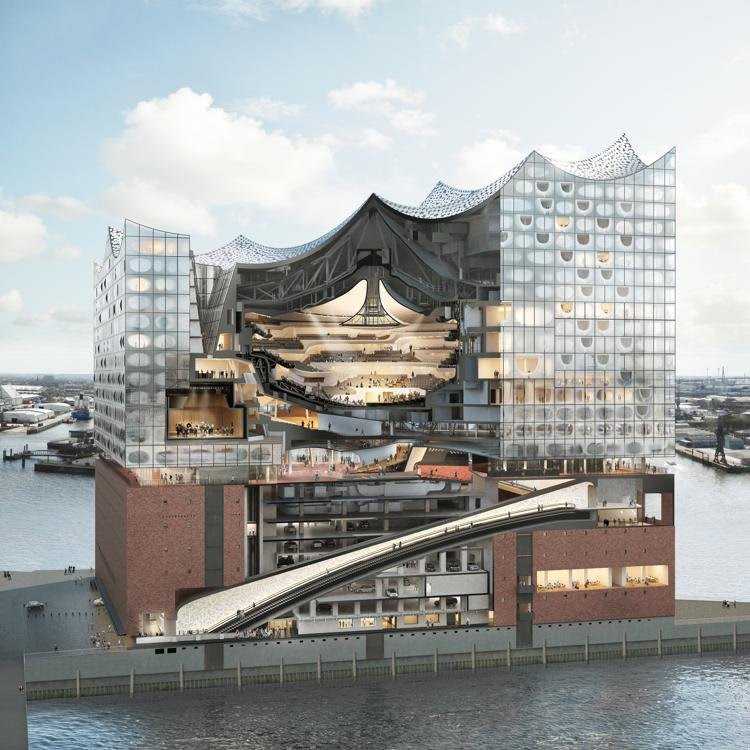 This programme also featured Wolfgang Rihm, billed as"Germany's greatest living composer", though he couldn't attend so Hengelbrock raised a placard with Rihm's name on it , a nice humorous touch.  Rihm, Zimmermann and Rolf Liebermann, together with Mendelssohn and Brahms, Wagner and Beethoven: another point being made, that audiences can cope with diversity without having to be coddled. There are other halls in the new Philharmonie, better suited to smaller ensembles and chamber music. There's another concert on Sunday which will also be broadcast. Click on photo at right to see the building in cross-section. Yet another reason why the Elbphilharmonie is a game changer : It represents a new way of bringing music to audiences. HD was a start, but stymied because it depended on cinema distributors who didn't make enough money to promote it. But modern technology means that audiences can listen any time they want online, wherever they may be.  Investing in orchestra-led, or opera-house led  streaming means that those who make music get the full benefits of marketing, and also have greater control over artistic content.  Can record companies still control the market and create instant media darlings when there's good music around for those who care about quality as opposed to celebrity  No more provincial boundaries. And so the concert ended with the Ode to Joy, Beethoven 9, Bryn Terfel, Pavol Breslik, Wiebke Lehmkuhl, Hanna-Elisabeth Müller, the NDR Choir and the Choir of Bayerischen Rundfunks.  "Alle Menschen wurden Bruder"!" we've heard that thousands of times, but this time it felt fresh and real.