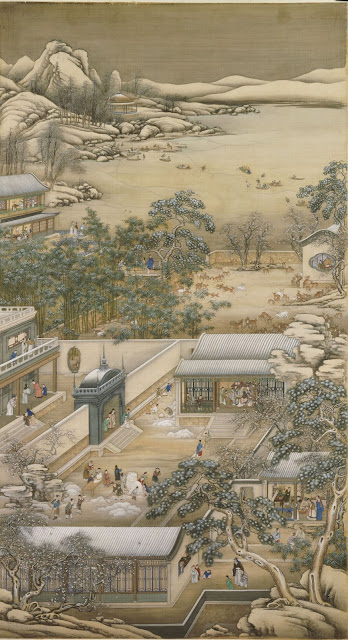 Winter scene in the Imperial Palace, Beijing : click on the photo and move your cursor to enlarge to appreciate the detail. The original scroll was three metres tall, painted with meticulous detail.  It was painted by Giuseppe  Castiglione (1688-1766) aka Lian Shi Ning 郎世寧;. Castiglione came from an aristocratic Italian family but became a Jesuit missionary and was sent toi China , arriving in 1715. In line with Jesuit practice, he immersed himself in Chinese culture. Unlike other missionary groups, the Jesuits believed in winning hearts and minds, however long that might take rather than conversion by force.  Castiglione served at the courts of three emperors of the Qing dynasty,  the Kanghsi, Yongzheng and Qianlong. emperors. Using Chinese materials, Castiglione painted in a blend of Chinese and western styles. He did portraits of his emperors seated on their thrones in formal Chinese style, but also posed in more western ways. His portrait of the Emperor Qian Long for example, shows the monarch astride a horse, almost exactly as if he were Louis XV, his almost exact contemporary. Indeed of the two, Qianlong probably outshone Louis.  In the painting above, we see the imperial children, playing in the palace gardens, like kids would do anywhere. They're building a snowman. But being young princes, their snowman is a Chinese lion.
at January 10, 2017