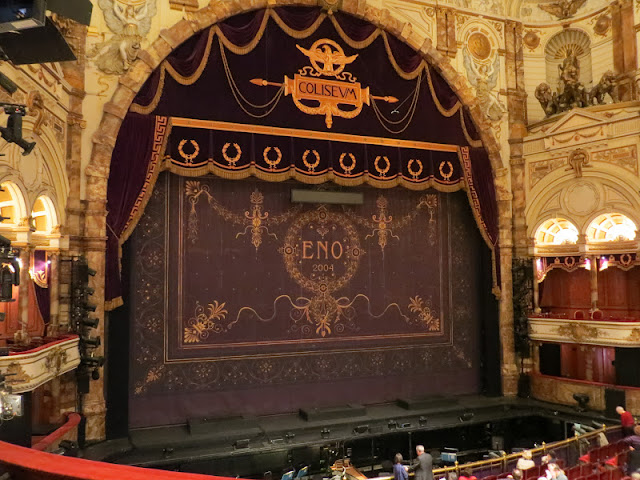 Once, ENO new season announcements were exciting. If only that could be said of the 2017-2018 season.  Perhaps this was inevitable given the unprecedented funding cuts. The ENO still has the potential to be the creative powerhouse it once was, but not, I suspect,  under the new system.  Whether Cressida Pollock's management genius has turned the company around, or in a different direction, still isn't clear.  It's been a while since the Arts Council England's "special measures" - still largely unspecified  - have been in place, so it would be interesting to know  how far these have been addressed.

Four new productions, the most promising being Verdi Aida, which launches the new season and could well be the hit of the year.  It's directed by Phelim McDermott, on whom we can depend for good theatre.  His Philip Glass Satyagraha, with Improbable,  premiered in 2007, was so inventive that it's being revived yet again in February 2018.  Glass's unusual idiom defies the notion that avant garde doesn't sell. It does when it's done well.  Indeed, Glass operas have contributed greatly to the ENO's creative reputation.  Last year McDermott's  Glass Akhnaten was a  success.   Aida, with its potential,for grand theatrical special effects,  should be well suited to McDermott's style.  The cast will include Latonia Moore, Michelle DeYoung, Morenike Fadayomi, Gwyn Hughes Jones, Brindley Sherratt , Matthew Best and Musa Ngqungwana.  Keri-Lynn Wilson conducts.  ENO loyalists should be out in force to show support for the comapny's traditioins.

The ENO and the Met have understandings.  Nico Muhly's Two Boys premiered at the ENO before moving on, somewhat changed, to the Met. Muhly's new Marnie at the ENO will be conducted by Martyn Brabbins, now the ENO Music Director, a specialist in modern English -anguage opera.  That should ensure a good musical performance, however the opera turns out.   (Keri-Lynn  Wilson, incidentally is Mrs Peter Gelb)

Following on the success of Mike Leigh's The Pirates of Penzance, Gilbert and Sullivan's Iolanthe, directed by Cal McCrystal, whose background is in theatre. Then Daniel Kramer's production of La Traviata with Claudia Boyle.

Revivals of audience favourites include Jonathan Miller's The Barber of Seville, Richard Jones's Rodelinda, Phelim McDermott's Satyagraha, Robert Carsen's A Midsummer Night's Dream and Fiona Shaw's The Marriage of Figaro which will also be conducted by Martyn Brabbins.
at April 27, 2017