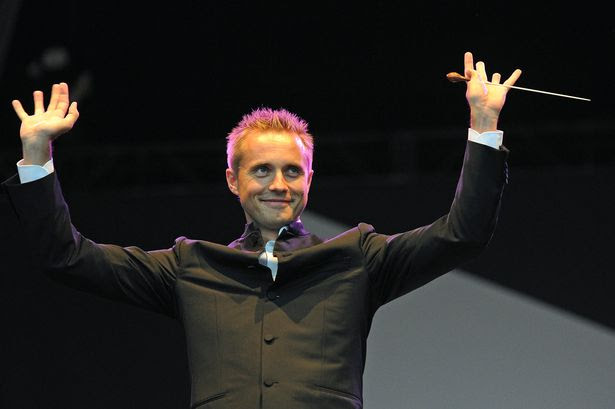 Vasily Petrenko and the Royal Liverpool Philharmonic Orchestra are a great combination, truly major league. More's the pity we don't get to hear them  more often down south.  So hearing them on BBC Radio 3 was a treat, especially with a strong programme of Hugo Wolf orchestral music and Mahler Symphony no 5.  Full marks to Petrenko and his players but nul points to whoever wrote the script for the BBC presenter. "Mahler's Fifth is almost as popular as Beethoven's Fifth"?  Wolf was told shouldn't be doing music. And who cares whether Mahler 5 is a TV theme tune?  Even local radio would be shamed.  "Reaching out" is all very well, but top-notch musicians like this attract audiences who know what they're doing. Quality sells itself.  Liverpudlians are not oafs!   Thank goodness for Petrenko himself,  a good communicator who makes sense without dumbing down.

Hugo Wolf wrote quite a bit of orchestral and chamber music, like the Italian Serenade, and his songs are among the finest ever written.  Aged only 17, he completed what would have been his first Symphony but lost the manuscript, though he rewrote the Scherzo and Finale.  Frank Walker, Wolf's biographer, described the Scherzo as "novel and arresting". "Over an ostinato figure on the drums a tiny germ motive enters canonically nine times, or, if we include the further shortened entries, twelve time  on flutes, oboes, bassoons and strings - all within the first four bars". This is augmented by "rising pizzicati strings" and "downward leaping staccato figures" on woodwind, developed over eighty six bars the germ motive recurring almost as many times.  A sturdy rustic trio and a "sudden rapid downward rush" of the violins introduces a triple canon.  Mercurial high jinks with a plaintive kick -  Wolf's voice is already distinctive. The Finale is a Rondo Capriccio, inventive but feels incomplete, as if Wolf's ever-impatient mind was eager for new adventures.

Wolf was an able orchestrator,  but here we heard Mahler's arrangement of the Vorspiel to Wolf's opera Der Corregidor.  The Prelude is brief, only 5 minutes, but includes an expansive figure that "lifts the curtain" to the drama. Mahler didn't change much.

The trumpet solo that marks the start of Mahler's Fifth gleamed brightly. Although the Trauermarch is a mourning procession, its steady pace is broken by sudden flarings-up and gentler passages, which often, in Mahler, signify pastoral images.  Yet the trumpet continues calling: the Stürmisch bewegt section here alert and lucid, the mysterious slow passage in this instance very well defined. Though the orchestra is huge, what Mahler had in mind was "Kammermusikton", not chaos, observant listening, as if in a chamber ensemble. We hear, for example, the quiet plucking of a single violin.  . Well defined contrasts,  keeping up the momentum. Petrenko's approach also highlighted the chorale-like patterns and contrasts of tempo and mood.  Yet sensitivity is of the essence, which the RLPO do with great finesse : how well those violins shimmered, tenderly surrounding the harp.  The Rondo Finale felt richer and more fulsome after that Adagietto.  Often I think this is where the "love agenda" really lies in this symphony, for the music surges invigorated For what is love if it doesn't enhance life  Mahler very nearly died of a rupture while the symphony was in gestation.  Perhaps the warmth in this movement represents the vital life force which animates so much of Mahler's entire output.  The coda was triumphant, but cheerful, the RLPO rushing exuberantly to the brisk conclusion.

I was at the live concert in Liverpool and happy to join the standing ovation.