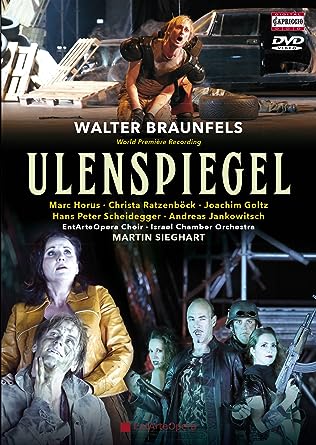 For the first time on DVD, Walter Braunfels' opera Ulenspiegel is now available. Braunfels's op 23 received its premiere in Stuttgart in November 1913. Two world wars intervened. Braunfels's Ulenspiegel was not performed again until 2011, as part of the Gera Festival.  An audio recording is available of that performance, conducted by Jens Tröster. This new DVD comes from the Linz Festival in 2014, and is conducted by Martin Sieghart, known for his recordings with the Bruckner Orchester Linz.

Braunfels' Ulenspiegel is based on Uilenspiegel and Lamme Goedzak, by Charles de Coster (1867), which Braunfels would have known in the German translation published in 1910. Coster was a child when Belgium became independent from the northern Netherlands.  Coster understood the tensions that led to the 1830 revolution. Coster's Ulenspiegel does not follow the Ulenspiegel of medieval tradition, popular throughout northern central Europe. Instead, Coster quite pointedly turns Ulenspiegel into a hero of the Dutch wars of independence from Spain, and pits Ulenspiegel against the Duke of Alba, whose draconian policies of suppression inflamed revolt.  As a French speaker and a Catholic, Coster would have been well aware of the irony. In the 17th century, the Dutch fought off Counter-Reformatioin  Spain.  In 1830,  Dutch Protestants  opposed Belgian (and Catholic) freedom.

This background is fundamental to understanding the opera.  Braunfels knew Richard Strauss Till Eulenspiegels lustige Streiche (1895). Like Coster before him, Braunfels' Ulenspiegel was a completely different personality, clothed in medieval disguise.   The "merry pranks" here have purpose. Even at this early period in Braunfels' career, the underlying rationale behind his music is clear.  All his life, Braunfels  opposed militarism and fascism.  This is vital to the interpretation of his music.  His lush orchestrations are not in the least "romantic" in Hollywood terms. Rather, Braunfels is a Romantic in the true spirit of the revolution which transformed European culture, forging individualism and self-determination. Ulenspiegel escapes prison but there's no happy ending.

The Linz production of Braunfels' Ulenspiegel took place in the Tabakfabrik, a disused factory. Hence the post-industrial set. Ulenspiegel and his friends are underclass.  The caravan they live in reminds us that mobility, physical ot social, is denied to the "peasants" of modern society.   There is nothing pretty about situations where the privileged can exploit the gullible with promises of Heaven, bought through Indulgences.  If the performance space is bleak, it fits meaning. Moreover, the Israel Chamber Orchestra are visible at all times, reminding us that opera is theatre, and music is art.

The version of the score used here is an arrangement for chamber orchestra by Werner Steinmetz (2014) which makes performance more practical and requires a smaller chorus.  The essentials are retained. If anything, the percussion sounds even more hollow and ominous echoing in the open space of the Tabakfabrik, and the winds sound haunting. Though textures are less rich, they feel hardier - more "Dutch" than "Spanish".

Although the EntArte Opera Choir sing well,  the relatively small ensemble doesn't quite give the impact of a vast force in uproar. On the other hand, the focus is greater on individual parts.  Marc Horus sings Ulenspiegel, capturing the prankster's rebellious spirit. When Ulenspiegel's energies are channelled purposefully, he becomes a genuine hero, rather than fool  as hero.  On film, we can also focus on detail. Close-ups are rewarding.  Ulenspiegel's father, Klas, sung by Hans Peter Scheidegger, is vividly characterized, though the role is killed off fairly early in the plot.  Christa Ratzenböck sings a strong Nele, Ulenspiegel's foster sister and lover.

This DVD is welcome, but you do also need the  Tröster.CD version from 2011 for the full score. Neither performance is ideal, so I hope the opera gets done again soon, with better resources and an understanding of Braunfels'  idiom, on the level of Lothar Zagrosek's Die Vögel, (1997) so outstanding that all others pale before it. Ulenspiegel is a good opera, but what we really need is a decent recording of Der Traum ein Leben  which was done in Bonn not long ago. the only recording on the market is so badly recorded that it's unlistenable.

Please also see a few of my other reviews of the works of Walter Braunfels: