Ostersonntag Hanns Eisler's setting of Bertolt Brecht's poem Frühling 1938, from Eisler's Hollywood Liederbuch.  Brecht opposed capitalist oppression  but his heirs enforce copyright to extreme lengths.  Fortunately, Eisler believed in the dissemination of Brecht's ideas, and in solidarity with the People. Eisler's song begins almost hesitantly, as if the feelings expressed are too painful to confront. The piano plays dotted rhythms,  pulsating tension and suppressed  anxiety.

"Today", the singer intones, "it's Easter Sunday." But a chill wind blows a sudden snowstorm, across the sea, covering the green shoots of Spring under a blanket of snow. An apricot tree stands in the garden, protected by the warm walls of the house. Will its buds be killed by frost?  The poet's son begs him to protect the tree . The words "younger son" are warmly shaped, in contrast to the frigid tension that's gone before.  The pace becomes more urgent.  The father had been writing a diatribe against the warmongers whose machinations threaten the whole continent, the island of calm, the people there and "my family", words again set with gentle warmth.  Eisler elides the last phrase,  with a dramatic descending curve, ending with the words "vertilgen muss"  half-spoken, half-sung, but sinister.  The edgy chords become stronger and more defiant.  Minor key, but major impact. Silently, father and son place hessian over the freezing buds.  Will the tree survive, will it bear fruit? The song ends inconclusively, the last figures on the piano repeating, hovering, unresolved.  The song lasts barely 90 seconds, yet encompasses vast stretches of time, place and feeling.  Like Brecht, Eisler was in exile, physically comfortable but vulnerable.  Poet and composer both in emotional "islands", trying to stave off the chill of what they knew was happening back home.

Eisler's Hollywood Liederbuch is an amazingly varied document of alienation and protest, the "Winterreise of the Twentieth Century", as Matthias Goerne, its finest interpreter, has called it.   Read more about Goerne and Eisler's Hollywood Liederbuch HERE, and about Eisler's Deutsche Sinfonie HERE. Lots  more on this site about Eisler, Brecht, Goerne, war and anti-facism.

The photo below is ironic, too.  In the early 20th century cars were a symbol of progress and faith in a future where machines would serve man. Thus cars were often depicted on greeting cards, especially at New Year. Although commercial cards were common, people often arranged for photographers to take bespoke greetings cards.   Private photography was only for the rich, then, and people would often pop into studios or hire a professional to commemorate special occasions.  So when these soldiers, at the front somewhere in the 1914-1918 war, posed together in a car, they were having a joke   Notice the "broken" bicycle.  Most of their families and friends back home would not have owned cars, so the novelty would have been even more exciting then than it is now. The original was shot in colour, too, even more impressive ! 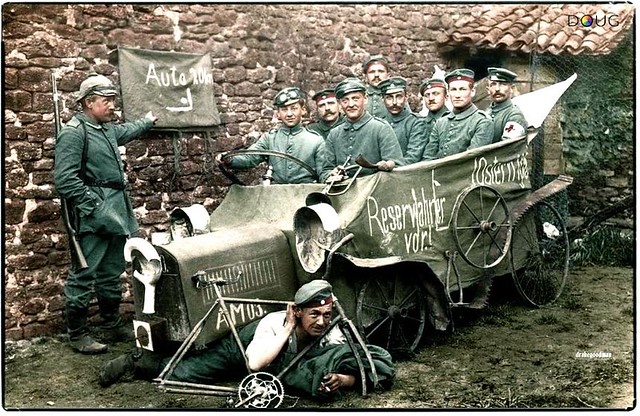