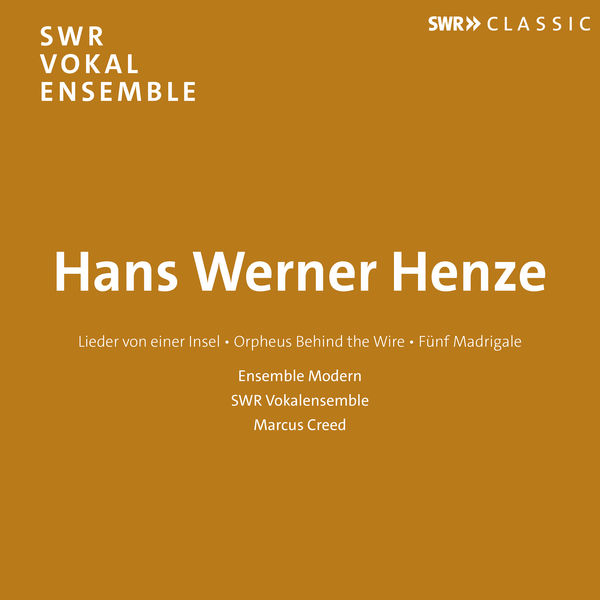 Hans Werner Henze works for mixed voice and chamber orchestra with SWR Vokalensemble and Ensemble Modern, conducted by Marcus Creed. Welcome new recordings of important pieces like Lieder von einer Insel (1964), Orpheus Behind the Wire (1984) plus Fünf Madrigale (1947).  Calling these "choral" works is a misnomer, since Henze writes so well for vocal ensemble that the voices move as a unity and as individuals, like a parallel orchestra, voices interacting with instruments.
Such are the densities of vocal interaction in Orpheus Behind the Wire that Henze can dispense with orchestra altogether.  SATB form is stretched with such refinement that the voices are almost microparted, in 12 part a capella. The voices of the SWR Vokalensemble are so perfectly balanced that the singing seems to flow seamlessly,  the rich textures, enhanced with great depth.

That sense of flowing movement is significant, for Orpheus Behind the Wire was created to be danced to.  Fluid movements, subtle changes which suggest constant evolution. This is music as Greek sculpture, form as clearly defined as muscles carved in marble, or the folds of garments on statues frozen mid-flow.  The progress across the five songs is formal, yet elegant and deliberate, as stylized as Greek art.  The text was written in 1978 by Edward Bond, and re-tells the story of Orpheus's journey to the Underworld in search of Eurydice with a modern twist : the idea of individuals caught up in situations beyond human control. Orpheus can never unite with Eurydice, but will forever remain alone and alienated from the world around him.  When Henze splits the four vocal groups into twelve individual voices, he unites meaning with musical form.

An otherworldy hum underpins the first song, What was hell like?, the vocal line shimmering on several levels. "No echo came from my music". The words “silence, silence" repeated like an echo spreading into empty distance.  Orpheus and Eurydice cannot travel together, but the physical death of one means the spiritual death of the other. Thus the long lines reaching out, but not connecting.  Undulating lines, where words are broken into particles and scattered, like dust in the wind, "silenced, silenced". This is deliberate irony.  The singing is pitch perfect and beautifully modulated but the sentences are hard to make out, for  this is the Underworld, where shadows deceive.  In Hades, meaning is shrouded. By breaking up the vocal line, Henze is using sound to capture the ambiguity. Like orpheus we must pay attention and feel our way.   Orpheus growsold, "more strings on this lyre than hairs on my head", but he is not free. Occasionally the men's voices dominate, but the mood is troubled.  At last, something stirs. "Pressed" the voices sing on an upbeat, "by the weight of the world".  Now tense, more anguished figures, a multiplicity of voices, their lines wavering in tumult.  The text draws hope that "somewhere the starving have taken bread/from those who argue the moral of guns/ in assemblies guarded by guns".  When the poor no longer shiver in rags, "Then I hear music of Orpheus, of Triumph ! of Freedom!". In the dense layers of texture, the exact words aren't easy to make out, but that might be for the reason that freedom is not yet at hand, meaning must remain occluded, secretive, literally "Behind the Wire". 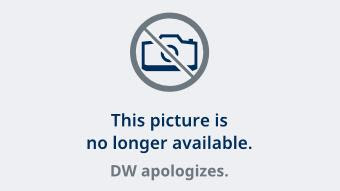 In Lieder von einer Insel, Henze recalled his close friendship with Ingeborg Bachmann.  She wriote the poems in the summer of 1953, when the pair had escaped to Italy, symbol of the "golden South" celebrated by Goethe and so many other northerners before and since.   Bachmann's poems are sunlit, but haunted : "Schattenfrüchte fallen von der Wanden". Henze's setting is dominated by celli, trombone and double bass, long, keening lines that suggest darkness. The voices sing in unison, the range of timbres creating a rich lustre.  The double bass leads the celli into a solemn dance.  The central song, Einmal muss das Fest ja kommen, resembles a festive procession, led by trombone and portative, a small portable organ with connotations of the Middle Ages, extended by simple percussion.  The male and female voices separate, singing alternate lines, the vocal parts then alternating with instrumental. The effect of a medieval celebration. But what celebration ? perhaps a brief Carneval before a period of mourning. ?  "...die Krater nicht rühn!"    Henze sets the men’s voices in the fourth song almost as plainchant, the women's voice high and piping like choirboys. Whoever leaves the island cannot return unless rituals are performed. The mood is sinister : the trombone wails, the portative groans.  The final song is deceptively simple, though the images are apocalyptic. "es ist ein Strom unter der Erde, der sengt das Gebein". And we shall bear witness.  When Henze set Bachmann's poems, she still had ten years to live, but he knew the dreams they'd had were doomed.
Based on translations of early French poetry, Henze's Fünf Madrigales is a lively mix of mock medievalism and modernism. He was only 21, just emerging from a youth in which music had to conform to Nazi taste.  Although it's an early work, we can already hear Henze's distinctive personality in embryo.
at November 23, 2017