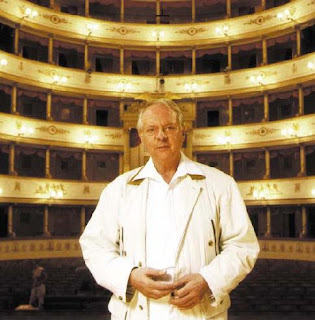 KarlHeinz Stockhausen lives !  For my review of Stimmung and Cosmic Pulses please read here. Two major Stockhausen events coming up. Cosmic Pulses and Stimmung at the Barbican on 20/11 and Trans and Tierkreis with the London Sinfonietta (Pascal Rophé) at the Royal Festival Hall on 6/12.
Stockhausen needs to be heard live . His music was created to be experienced through all senses, each performances unique to the place in which it is re-enacted.  That's why Stockhausen Verlag CD's cost a fortune !  Fools they be who think he can be possessed like a consumer product.  Performances are created anew each time,  for whatever performance space in which it is re-enacted. Re-enactment, because a Stiockhausen event is a kind of group ritual  in which everyone participates, using their minds. Conceptually, Stockhausen means more than ever now, in a era when technology expands consciousness. It is not Stockhausen who is an anomaly, but the idea that music must be trapped on plastic in fixed formats. That's an aberration of the recording era.  Stockhausen reminds us that in all cultures, at all times, the message means more than the medium.
In Cosmic Pulses, Stockhausen dispenses altogether with the idea of orchestra as fixed entity.  The performance space itself becomes "the instrument". Hence the term "cosmic pulses", since the sound desk emits pulses projected into space. As sound waves hit a surface, they refract and reverberate.   Stockhausen doesn't do movements in formal symphonic terms, but movement, in its purest form, is fundamental to his work.  Nothing stays still, except in terms of non-movement : even silences mark passage.  Imagine visualizing the sound waves as they bounce back and forth, often in patterns   At the Barbican, the sound desk will be managed by Kathinka Pasveer, Stockhausen's  muse and acolyte. What will happen, when she, too, travels to the stars ? New interpreters, new technology, adapting the principles further and further.
This is the third Cosmic Pulses in London in about ten years.  The most recent was at the Roundhouse in 2013. In 2008, the instrument was the Royal Albert Hall, as big and as grandiose as halls can be. An extravaganza for sound desk !  For once, I wished that the blue mushrooms didn't  stop sound dissipating into the emptiness of the dome. Imagine, sound waves rising up, escaping through  the roof, dissipating into the air outside ! Do sound waves die or do they travel endlessly into space, imperceptible to human hearing   My late friend,  Michael Gerzon, who worked on psycho-acoustics , believed that the wonders of the universe have hardly been unlocked by modern science. That's the kind of creative, conceptual thinking he liked so much in Stockhausen. "In three hundred years", Michael said "we might come closer". 300 years before our time, Isaac Newton was still alive.
Cosmic Pulses is the 13th of the planned 24 hours in Klang, Stockhausen’s visionary epic.  It's not opera, but definitely a theatrical experience.  At the Royal Albert Hall, darkness descended, the dome lit up by tiny lights, like stars – Royal Albert Hall as planetarium !  That Proms season opened with Messiaen Dieu parmi nous, when the 9999-pipe RAH organ blasted full force.  For a few moments we could have been in the presence of the divine, or whatever you might call something beyond normal..  Stockhausen was Messiaen’s student.  The Barbican Hall is much smaller, built with wooden floors and walls that absorb sound in a different way. The hall is also fan-shaped, wider than it is deep. For once, the upper galleries might be a good place to be, assuming that sound can travel without being blocked by the overhangs.  The Barbican has hosted other Stockhausen experiences, like Hymnen, (read more here) not quite as large scale as Cosmic Pulses but also thrilling.
Before Cosmic Pulses, Stockhausen's "greatest hit", Stimmung, with Singcircle, led by Gregory Rose.  The word "Stimmung" means convergence, the concept of disparate forces coming together through a process of being attuned.  Not for nothing it was conceived in the Summer of Love, 1968 ! It’s a series of 51 segments which can be arranged in different ways and like throwing dice, the sequence can fall in many ways. Within each segment there are some fixed points but also much room for choices made in the course of performance. This isn’t straightforwardly notated music by any means: Stockhausen gives basic templates, but within them, there’s great freedom of invention and the onus remains with the performers, whose artistic responses “create” the piece anew each time. Yet, personal as the artists' choices may be, the ultimate goal of Stimmung is to rise above ego, and seek a kind of transcendence through interaction.  I've heard Stimmung numerous times - it keeps coming round (pun !) , and also with Singcircle.  Should be good.
at November 17, 2017