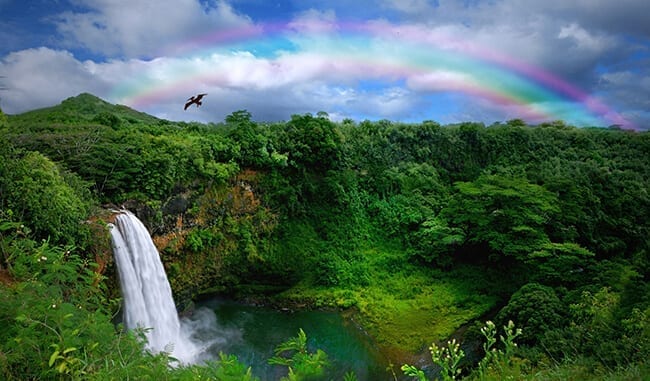 
You are Orplid, my land ! Shining in the distance, from the ocean rises your sunlit shores,  mists refreshing the cheeks of the Gods.  Primeval waters rise, rejuvenating around your hips, Child ! Before your Divinity kneel kings, who are your Guard of Honour.

Gesang Weylas, Eduard Mörike (1804-1875).  In his student days, Mörike and his friends created visions of Orplid, a fantasy island in the South Pacific, rising from the ocean, shrouded in mists, which deposit life-giving moisture. A metaphor for creative renewal.  The island's remoteness is symbolic, too, for it exists in the imagination, its culture and history artistic invention. What little we know about it comes from fragments Mörike later used in his novel Maler Noten, started in 1830, published but never complete, continuing to inspire the poet to the end of his life.  Boxes within boxes. The Orplid themes occur in a play enacted by Noten the Painter and his friends, some of whom aren't true friends at all.  The novel deals with dreams, art, wandering, sexuality and betrayal. Everyone ends up mad and/or dead.  These themes connect to real events in Mörike's life. As a young man, he met a mysterious woman, whom he called Peregrina (a name which means wandering).  Possibly she was a gypsy, and seems also to have had some kind of religious mania.  She disappeared, leaving Mörike enthralled in abject fascination.  Thus the connections with Maler Noten where Noten is haunted by a mysterious curse : love and art, mixed with danger and delusion.

The introduction to Hugo Wolf's Gesang Weylas (1888) replicates the sounds of a harp,, an illusion to Classical Antiquity where gods moved among mortals in pristine landscapes.   The mood is noble : the voice rises on the word "land"as if a halo were glowing round it. Depth  and richness in the word "Uralte", the emphasis on "Ur", so ancient it's before recorded Time.  But emphasis on "Wasser" too, the life-giving force that continues, eternally.  "Uralte Wasser steigen". Three words in the phrases, each one significant, marked carefully.  The last king of Orplid is dead, bu the goddess Weyla, is eternal.  Even kings must kneel before "Deiner Gottheit" for Orplid, land and/or conceptual vision is greatest of all.
at November 16, 2017