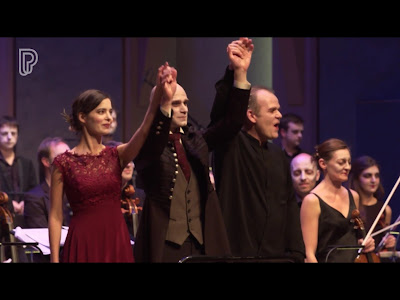 Sorciers et sorcières- theme of the spectacle at ther Philharmonie, Paris, screened live, now on demand here  thrillingly performed by  Les  Siècles et François-Xavier Roth.  Sorcerers and sorceresses  ! extra magic and mischief spiking up the potion : Robin Laporte, the actor as Master of Ceremonies, linking the music with dramatic narrative. Laporte stand to the side of the stage with his sorcerer props, green smoke bubbling from his cauldron as he intones phrases so seductive that we're almost hypnotized. At one point he chants spells, and the audience joins in. As his voice drops to a whisper, a solo violin plays a strange melody. The Philharmonie is in darkness, the music stands lit by lamps. An Ominous blue glow behind the orchestra.   Magic !

We don't, of course, see the ghost ship from the Flying Dutchman. But Laporte gets us in the mood, so when Roth and the orchestr let rip, it feels as though the ship suddenly looks up, threatening to invade our consciousness. Much more overwhelming than in the imagination ! Extracts from Berlioz's Symphonie fantastique, Dukas The Sorcerer's Apprentice,  and Saint-Saëns Danse Macabre, vividly performed.   This was an afternoon perfrormance, only an hour long, and from audience noise in the background, there were kids in the audience, having as much fun as the adults. This is how to grow new audiences - give them excellence, without dumbing down. Laporte's texts were written by Amélie Parias, a specialist in contemporary theatre (in photo with Laporte and Roth). Possibly above the heads of some kids, but kids use their imaginations and think. Unlike some adults.  For that reason, this spectacle is specially recommended for anyone who thinks standard repertoire is boring. Boring isn't in the music but in the minds of listeners who have lost the sense of wonder that is the soul of creative imagination. Exactly the types that need a bit of magic in their lives.