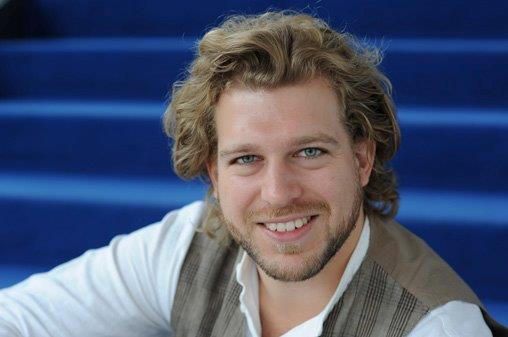 The Wigmore Hall's complete Schubert song series continued with Julian Prégardien and Christoph Schnackertz, in a recital deferring from May.  Well worth the wait, because Prégardian is good, his singing enhanced by very strong musical instincts. In Lieder, sensitivity and musical intelligence are as important as voice. A good recital, is one where you come away feeling you've gone deeper into the repertoire thanks to the performer, as opposed to watching celebrity for celebrity sake.

Julian Prégardien has musical thinking in his genes, and it shows.  His father's voice is a divine  gift from God, but Julian, still only 33, has a gift for communication and, even rarer, an enthusiasm for music itself.  Hence the wonderful Schubert Im gegenwärtigen Vergangenes, an unusual work where the lead tenor's part is demanding enough for a top-quality singer, but the song works best as a quartet.  Prégardien's voice led, enhanced by the filigree created first as a duet with the second tenor Kieran Carrel - keep an ear out for him -  further developed by the entry of the two baritones, Phil Wilcox and Niall Anderson.  Schubert's multi-part songs are glorious : a pity they don't get more big-name singers and high-profile gigs. At the end of the recital, Prégardien was joined by Ben Goldscheider for Auf dem Strom D943 (1828, Rellstab). Valve horns were relatively new at the time, and Schubert's writing for the instrument tends to dominate the song, to the detriment of the voice part.

Im gegenwärtigen Vergangenes is based on one of Goethe's Hafiz poems from the West-östlicher Divan. Hence the theme Bilder aus Östen, highlighting the perfumed sensibility of Goethe's invocation of exotic, distant lands of imagination, an aesthetic particularly suited to lithe-toned tenors.  Prégardien and Schnackertz began with the rar(ish) fragment Mahomets Gesang D549 (1817) following it with Versunken D715 (1821)  where the piano part trills circular figures,  as if, through the music, the poet is running his fingers through someone's curly locks.  Prégardien brings out the flirtatious intimacy in the song, often lost in more formal "Germanic" baritone approaches. Perhaps the text might apply to fondling a child, but it could equally describe foreplay.  Friedrich Rückert was even more of an orientalist than Goethe, and also translated Asian texts. His volume   Östliche Rosen (1822), a response to the West-östlicher Divan. was his first of many forays into exoticism.  Sei mir gegrüsst D741 (1822) with its lilting tenderness expresses feelings that could apply in any culture.  The person being greeted is lost, but  "zum Trotz der Ferne, die sich, feindlich trennend"  the poet reaches out. Thus the gentle, rocking refrain. The tenderness in Prégardien's delivery suggests lullaby, a caress in music.  Similarly, the unforced expressiveness in Prégardien's Dass sie hier gewesen D775 (1823), another Rückert setting where subtlety is of the essence.

A beautifully phrased Am See D124 (1814) led to four settings of Johan Peter Uz (1720-1796).  Die Nacht D358, Gott im Frühlinge D 448 and An Chloen (fragment) D363, and Der gute Hirt D449,  all from 1816.  In a complete song series, someone has to draw the short straw, but Prégardien and Schnackertz gave the rather slight songs good treatment. For Uz, the shepherd in Der gut Hirt was clearly Jesus. For Schubert, the shepherd could be a generic Romantic shepherd. The piano part suggests elegant repose, with a typically Schubertian undertow.  The alternating lines in the vocal part are fetching, too, sometimes soaring expansively, sometimes quietly reverent.

Hearing Schubert's Uz settings with his settings of Mayrhofer demonstrates the way Schubert responded to personal relationships as much as to poetry.  Prégardien and Schnackertz brought out the  delicacy of Geheimnis D491 (1816) which needs an intimate touch - it's about a secret, after all, a whisper, not a shout.  In Schlaflied D527 (1817) the vocal line rocks from high to low, taxing the singer. Prégardien, fortunately, made the flow even, so it felt natural, like the movement of a cradle.   Prégardien has a gift for  songs that need sensitive treatment. He negotiates the changes, letting the line flow illuminated by an understanding of what the words mean, even when the texts aren't particularly distinguished. Lieder is poetry. If words had no meaning, the songs wouldn't be Lieder.  The challenge ius to grow an interpretation from within.

Then to the challenge of Atys D585 (1817) and Lied eines Schiffers an die Dioskuren D360 (1816) much more sophisticated songs, which gave Prégardien more opportunity to show dramatic power. These songs were/are his father's speciality: Prégardien père will never be equalled, nor should he be. Julian Prégardien gave the songs a personal touch, which I appreciated, for Lieder is about the individual and the way he or she reaches an audience.  Being the child of someone so good and so well known is a double-edged sword. You grow up in a musical environment but you have to face pressures of expectation which other young singers aren't burdened with.  To stand on the stage at the Wigmore Hall, scene of so many Christoph Prégardien triumphs, must be daunting indeed.  That takes guts.  Prégardien fils is very good and deserves to be respected for himself.  Though he's still young, Prégardien has already forged a substantial career.

For his encore, Julian Prégardien sang Nacht und Träume D827 (1825, Matthäus von Collin), beautifully and masterfully executed, the long lines stretching expressively. I thought I saw a tear run down Prégardien's face, which someone else confirmed.  We were touched.  Nice to see a singer, not as an instrument, but as a human being.
at November 08, 2017

This is the first time that I comment an article about one of my concerts. Simply as I want to thank the Author.

I would especially like to thank him for his last lines. In fact I was very touched during the Encore, as I had to remember in that very Moment two different aspects of my life on the recital stage. First of all I felt so grateful and humble to follow my father's steps. I had and have him singing Nacht und Träume (and so many other Lieder) in my soul, in my brain, in my beeing. And, the second thought: we have allready performed this Lied together on the stage of Wigmore Hall as an Encore of our 2014 father and son recital.

I am touched by the author's description how I might feel on a stage like Wigmore Hall's (or Schubertiade's). I am happy that both critique and public seem to appreciate my personality as much as my heritage. In fact I do not carry this heritage to heavy, I do not think it is a burthen or Damokles' sword. As long as, on your side, expectations and comparisons are not as strong as curiosity and esteem.
Hope to see you again next february, when I will have the honour to sing Schwanengesang at Wigmore Hall.
Yours, Julian Prégardien

It id you we must thank ! A wonderful concert ! I heard your father at Wigmore Hall 25 years ago, and had a nice letter from your grandfather. So it is destiny !

You are welcome to use this in your publicity