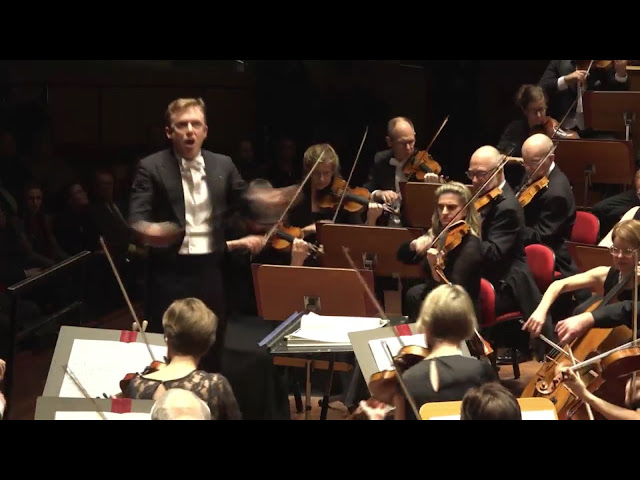 From the Berwaldhallen, Stockholm, a very interesting Mahler Symphony no 8 with Daniel Harding and the Swedish Radio Symphony Orchestra (livestream archived here).  The title "Symphony of a Thousand" was dreamed up by promoters trying to sell tickets, creating the myth that quantity matters more than quality.  For many listeners, Mahler 8 is still a hard nut to crack, for many reasons, and the myth is part of the problem.  Mahler 8 is so original that it defies easy categories.  To understand it, we need to listen in terms of Mahler himself, ditching the baggage of preconception that's piled up, blocking closer evaluation.  What is M8 about, and how does it fit in the context of Mahler's work as a whole ?  "Veni Creator spiritus !" and  "Accende lumen sensibus". Come, spirit of creation,  arise, light of sensibility.  Mahler makes it pretty clear that these ideas matter for they are embedded in the music as well as the text.  Throughout Mahler's entire oeuvre, he develops ideas of transformation and creative renewal.  Ignore that and ignore the whole point of his music.  We need to ditch the idea of Mahler as Party Rally bombast. Sure, the orchestra's big, and there are five soloists and four choirs, but that's the irony. As so often in Mahler, it's the quiet moments that are most personal and significant : the moment when the individual comes to terms with the cosmos.

Structurally, Mahler's Symphony no 8  throws conventional listening off-balance.  Conceptually, the symphony is radical because it contradicts straightforward assumptions.  The two  parts don't seem to connect, there's no narrative and the voices do not represent "roles" but function as much more abstract extensions of the music and the ideas within it.  And that silence at the beginning of the Second Part gets misunderstood because it is silence, which minds attuned to blast and noise cannot comprehend.  Though I'm a voice person, over the years I've come to realize that the silence,and the quiet introduction that follows, is the true soul of the symphony.  Like the Consecration in a Catholic Mass, the most important part of the ceremony comes when the singing and praying stop, and the mystery of transubstantiation takes place. You don't need to believe that God becomes one with mankind, or even in God, but the idea of miraculous transfiguration is so powerful that it is a metaphor for Creation itself.  "Veni, creator spiritus".

Daniel Harding's Mahler 8 with the Swedish Radio Symphony Orchestra is immensely rewarding, particularly if you know Mahler well.   It is also an ideal performance for those who don't "get" Mahler 8 otherwise. Because the Berwaldhallen in Stockholm isn't a great monster of a hall, it favours a much more intimate atmosphere.  Everyone is up close together : it feels as if everyone knows everyone, which is important since music is meant to be heard in the company of other people   On the video, the cameraman pans over the chorus which is annoying if you're following the soloists, but that makes  sense, when you think of the performance as an expression of the community In so many ways, the Eighth is Mahler's secular Mass where a multitude come together for a communal purpose which is fundamentally private.  Thus the significance of the silvery  chord in the beginning of the second part, which almost exactly replicates the bell which announces the beginning of the miracle of Consecration.  As so often in Mahler, details count, like the piccolos, the triangle, the glockenspeil, the celesta and the mandolin, which as in Mahler Symphony no 7 may represent the lute of a solo musician serenading unseen and unknown.  Here they can be heard clearly, instead of being overwhelmed by big blasts of sound.  The Swedish Radio Symphony Orchestra has a lovely, mellow sound which suits the idea of "light". The warm glow of benevolence, rather than the blinding glare of, say, searchlights and interrogation. 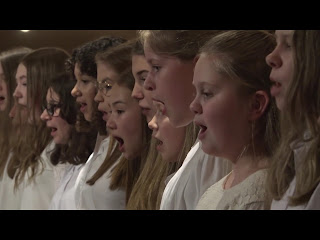 The soloists were Hanna Husahr, Lise Lindstrom,Susanne Bernhard, Karen Cargill, Marie Nicole Lemieux, (one of my favourites), Simon O’Neill, George Humphreys,and ShenYang. They always get listed because they are soloists, but what matters most is the ensemble and the way they interact with the orchestra and each other. Like the anchorites in the painting that apparently inspired Goethe's vision, they are embedded in the landscape.  The choirs were Swedish Radio Choir, Eric Ericsons Kammarkör, Mikaeli Kammarkör, St Jacobs Kammarkör and the Barnkör. I liked their singing a lot because it felt spontaneous, rather than over-polished: very much a coming-together of good, ordinary people who care about what they do.  The children's choir  were delightful : so nice to see kids behaving naturally, as kids should, their eyes shining with wonder.