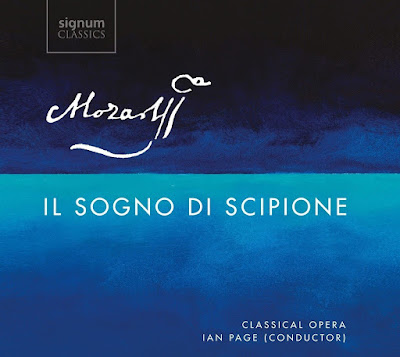 Mozart's Il sogno di Scipione, K126 from Classical Opera, conducted by Ian Page, with soloists Stuart Jackson, Klara Ek, Soraya Mafi, Krystian Adam, Robert Murray and Chiara Skerath, from Signum. This is very early Mozart, scheduled for performance when the composer was 15, though there's no evidence that the premiere took place as planned.  Though there are two other recordings, this one is worth hearing for its freshness and spontaneity, values which enliven a piece by a very young composer, and give it particular charm, which amplifies its underlying message, that mortals have more sense than to be fooled by the delusions of dream.

Il sogno di Scipione is what we'd now call a dream sequence : a fantasy stylized as allegory. There is no plot.   While asleep, Scipione is wafted away by Fortune and Constance to some heavenly otherworld.  "You're not in Massinissa (Africa) any more!" the Fates inform him.  The Fates demand he choose only one of them as his destiny.  Scipione, understandably confused, refuses to take sides. Fortune and Constancy slug it out vocally, with trills and flourishes as weapons, conjuring up the spirits of the dead.  Being fickle, Fortune eventually flounces out, cursing.  Scipione suddenly finds himself back home and awake. You can't blame Scipione for singing "Stelle, che fia ? Quel sanguinosa luce!". Constancy has won, because she didn't desert him.  Basically, you can't choose your destiny, it finds you.  There is a lot more to Il sogno di Scipione than an excuse for vocal gymnastics.

That's why I'm so taken with this recording.  Ian Page conducts the orchestra and chorus of Classical Opera with a light, but elegant touch : the colours sparkle, undimmed and pure.  Constancy (Klara Ek) and Fortune (Soraya Mafi) are dream symbols not women.  Ek and Mafi are delightful, singing with great charm.  Krystian Adam and Robert Murray sing Publio and Emilio, representing the visions the Fates conjure up.  Scipione, on the other hand, is a real person, with emotional substance.  By making Scipione feel like a real person, Stuart Jackson fills out the  character with human feelings and conflicts. The mortal triumphs, because he's created as a sympathetic human being.

No-one, ever, comes close to Peter Schreier, who sang the part in 1979, when he was in his prime.  It would be utterly pointless to compare anyone with him.  But Scipione is, arguably, a young man's part, which Jackson's directness and enthusiasm brings out well : listen out for his sudden leaps up the scale and extended decorative legato : the "spirit" of Scipione, a man who dares question deities.  Jackson expresses Scipione's confusion and fears, but prepares us for his eventual awakening. Schreier, one of my gods, had an ardent challenge to his voice which communicated more deeply than words alone, and Jackson, too, has a distinctive timbre. He's not an "English tenor", though I can imagine him a brilliant Peter Grimes : definitely a talent to nurture.  I first heard him sing a few songs at a private recital when he was a student. He was impressive, but you can't count on hearing students again, even if they're good.  The next time I heard him - unexpectedly - was at the Wigmore Hall Song Competition in 2011.   Immediately I recognized the voice, though not the name, though it had been nearly a year since I'd first heard him. I nearly shouted aloud "I know that voice!"
Nothing will replace the Schreier recording, with its dream team including Lucia Popp and Edita Gruberova,  but Ian Page and Classical,Opera are brighter and more period-true than Leopold Hager and the Mozarteum Orchestra Salzburg.  After 40 years, Il sogno di Scipione deserves another outing.  I haven't heard the other recording on Brilliant Classics but am not worried.  Schreier and Hager and Jackson and Page are plenty rewarding.