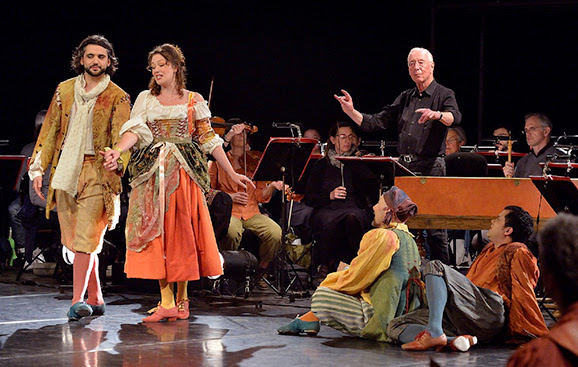 Rameau : Maître à danser with William Christie and Les Arts Florissants in the famed production at Le théâtre de Caen, from 2014,  still (just) available on Culturebox.  Notice, Maître à danser, not master of the dance but a master to be danced to: there's a difference.  Dance is movement, formalized into art.  Dance encapsulates the values of the baroque, where art meant civilisation, refinement over nature, orderliness over abundance.  Rameau was a music theorist as well as a composer, his music shaped by the values of his time. The pulse of dance invigorates his music, and informs its intricate patterns.  We can hear it animate the music. Now, fortunately, thanks to extensive modern research, we can also watch music being danced to, in stagings that reflect the spirit of the period.

In this performance, Christie presents Daphnis et Églé  (1753), written as a private entertainment for Louis XV and his court at Fontainebleau, after days spent out in the forests hunting for game. Context is relevant. It also commemorates the birth of a royal princes, and dynastic continuity.  The King wanted to be amused, but the show also had to flatter his image of power.  Thus both pieces present Happy Peasants, acting out simple, innocent lives, their peaceful idylls made possible by the benevolence of the King.

Daphnis et Églé is basically a masque for dancing,  Daphnis (Reinoud Van Mechelen) and Églé (Élodie Fonnard), shepherd and shepherdess, are friends who gradually fall in love over a sequence of 16 tableaux.  Daphnis flirts with a stranger, singing a lovely air. Églé drags him away.  Cupid appears, with wings and a wooden bow and arrow.  Daphnis presents  Églé  with a bow. Later, heavily "pregnant, they embrace as happy peasants dance around them.  Van Mechelen and Fonnard are familiar names on the French baroque circuit. Fonnard's particularly pert and dramatic  and Van Mechelen has good stage presence. The first performance of this piece in 1753 flopped, apparently because the singers were duds. Fonnard and Van Mechelen are good. They're delightfully fresh.  But singing is only part of the dramatic whole, contrary to modern notions about the past.  There isn't much of a plot, and what narrative there is unfolds in stylized symbols. In the final sequence, Églé carries a doll, representing a new-born babe. Louis XV and his Queen, with their infant prince, would have been flattered.Contrary to modern assumptions, the singing, though beautiful, does not take precedence over all else.  Baroque values emphasized balance and natural order, ensemble not diva-ism.  Van Mechelen has a lovely passage "Chantez ! Chantez", garlanded by woodwinds that sing like birds, bringing "nature" into the proceedings, and the idea of natural purity. The long dance sequences, punctuated by simple percussion, emphasize the orchestra over the singers.  Indeed, the chorus has almost as much to do as the singers.

Daphnis et Églé works well when its slender charms aren't overwhelmed by excess opulence. Daneman's staging reflects this innocence, A simple cloth is held up on sticks to suggest  peasant theatre.  Alain Blanchot's costumes (organic dyed fabric?) show the shepherds and shepherdesses in what would have been normal 18th century costume for their class, ie "modern" for the time. Daneman has worked with Christie since their first Hippolyte et Aricie together some 20 years ago.

This stylized simplicity is of the essence, since The King wanted to portray himself as father of his people, a populace too childlike and naive to object.  Little did he know what would happen in 1789!

Françoise Denieau choreographed. Each of these danced sequences represent a different type of dance. Fans of early dance will enthuse about the finerMdetails, and the names of each type of dance, the arm movements and the position of feet.  Baroque dance stemmed from athletics aristocrats practiced to keep fit and to fence. It's more stylized than 19th century ballet, and, serves the music. It isn't over-elaborate, since the purpose of the piece was conceptual idealism.  It feels like hearing the score come alive. When the music takes precedence, there are some lovely moments.  The Three Graces appear, in skimpy flesh coloured chemises, their arms held in expansive gestures. A young man dances with them. I'm not sure "who" he represents, but his graceful agility is a joy to watch.

I first heard Christie's  Maître à danser  live at the Barbican in 2014, soon after the Caen premiere, together with another miniature, marking the birth of a second young prince, who would become the ill-fated Louis XVI.  In London, I think we got a truncated version of the two pieces, but I can't remember exactly.  Please see my other posts on Rameau's Zaïs HERE. and on  Pigmalion and Anacréon HERE