Andrew Davis - Elgar Spirit of England, Raymond Yiu The World Was Once All Miracle.

When Sir Andrew Davis conducts Elgar, it's always an occasion, but this concert  at the Barbican, London, was much more special than most.  Davis conducted the BBCSO in Elgar's Spirit of England, op 80  (1916), which captures the exuberant spirit of England at the start of the First World War.  This was the highlight of a well-conceived programme where the multiple connections between the pieces enhanced the whole. Spirit of England was preceded by Lilian Elkington's Out of the Mist (1921), a bleak reminder of what war really means.  The programme began with Elgar's Starlight Express (1916) a jolly jaunt for children, which may parallel the high spirits of adults who didn't realize where the war would lead, but also worked well with Raymond Yiu's The World Was Once all Miracle, bringing out its inventive personality, while anchoring it in tradition.   A hundred years separate Elgar and Raymond Yiu, but the spirit of creativity shines bright and true.

Elgar's Spirit of England is so powerful that it draws you into its glorious self confidence  even though we now know where jingoistic bluster can lead.  But for a moment we're spellbound by the sheer extravagance of the piece.  Drums roll, strings surge and the BBC Symphony Chorus explode.  Andrew Staples's voice rose heroically above the wall of sound. "Spirit of England, go before us !"    The orchestral writing sets a pulse which supports the chorus, where male and female voices sing alternating lines. This creates an interflow suggesting vast, turbulent forces. Staples shaped the magnificent line "We step from days/ of sour divison/ into the grandeur of our Fate", each key word meticulously articulated, the last word "Fate" ringing out like a clarion.  Staples’s enunciation was sharp, consonants crisp, much more idiomatic than the other three tenors I've heard in this piece in recent years. The English tenor style, at its best, brings out the edge in the language hinting at hidden undercurrents : what really is the unshakeable soul of "divinely suffering man"?   This does matter, since Elgar may well have seen the circumstances more acutely than did the populist poet.

In contrast to the first section "The Fourth of August", the second section "ToWomen" is more restrained.  While the tenor line was integrated with chorus and orchestra, it now stands almost alone.  Phrases like "like a flame" and "boundless night" fly upward from the line, Staples emphasizing them with flourish.  A melancholy violin passage introduces a much darker mood.   "For the Fallen" is funeral ,procession but proceeds forward with relentless surge, Davis marking the throbbing undertow in the orchestra. The choral line with its clipped, almost staccato tension, evoked, perhaps gunfire.  The woodwind figure, followed by low-timbred strings, was particularly moving.  "We shall remember them", sang Staples, his voice carrying above the chorus and orchestra.  "To the end, to the end, they remain".  Hearing Lilian Elkington's Out of the Mist before Spirit of England  intensified the sombre mood with which "For the Fallen" ends.

The title Out of the Mist refers to the heavy fog that hung over the Channel when the ship carrying the body of the Unknown Soldier arrived back in England.  Lilian Elkington's response in music, was dignified and elegaic.  The piece runs just under 8 minutes, but is ambitiously scored for large ensemble . It begins mysteriously : one can imagine the ship materializing in port, out of the mists, docking and unloading the coffin,which was then taken to Westminster Abbey, where it remains today. The Unknown Soldier is "home" at last, carrying with him , symbolically, the memory of millions of others who would never return.  Thus, Out of the Mist ends with transcendent brightness, as if the Unknown Soldier and the men and women he stands for are bathed in glory.  The BBC SO recorded this piece some years ago, but this performance with Andrew Davis was far more,powerful. (For more about Lilian Elkington, please read HERE)

Elgar's Starlight Express was written in the midst of war, but is cheerfully escapist. Life goes on and morale needs boosting.  The extracts chosen for this performance displays the liveliness of Elgar's writing. The music is genuinely free spirited, with no trace of condescension towards a youthful audience.  Elgar even quotes the Christmas carol, The First Noel, decorating it with bells and cymbalds. The soloists were Roderick Williams and Emma Tring.  Incidentally, I have never seen so many kids in an evening performance before, several as young as 7 or 8.  I counted more than 20, and that was just around me.

Elgar is the biggest gun in British music. That Raymond Yiu's The World Was Once all Miracle was able to stand up to such competition says something.  Perhaps that's because Yiu's musical personality is highly individual.  The World Was Once all Miracle unfolds in six sections like a puzzle book, each piece reflecting a different aspect of the life and work of Anthony Burgess.  Yiu's settings are delightfully perverse. "Sick ! Sick ! Sick !" sang Roderick Williams "sick of sycophantic singing".   Jerky, quirky staccato in the orchestra, percussion like exclamation points, almost lyrical flights of fancy, tiny sparkling figures and exceptionally witty writing for voice.  Williams has an unequalled gift for singing with a naturalness thatn communicates like conversation, yet can also shape phrases and colour words bringing out their intrinsic musical character.  Spooky chords in the strings set the mood for the song "For we were all caught in the shame of sleep".  Williams curled his tongue round words, relishing their flavour as sound.  "Forgive us untempered for the day", a play on prayer, against a backdrop of hollow metallic bells.

Burgess's texts, with their oddball wordgames and images, lend themselves well to Yiu's style. The vocal line curves and meanders in "You were there, and nothing was said" where wooden percussion suddenly gives way to deep booming sound. The next song "I have raised and poised a fiddle" writhes, jokily mocking  the phrase "the music of the spheres". The orchestra then sounds at once exotic (like gamelan) and sleazy, like jazz.  "One looks for Eden in history, best left unvisited", sang Williams, "While the delicate filthy hand dabbles and dabbles, but leaves the river clean, heartbreakingly clean". The last song "Useless to hope to hold off" mimics nonchalant nightclub patter - echoes of bongo drums - then suddenly breaks off into tantalizing silence.  Raymond Yiu's music defies stereotypes, always playful, always elusive.  The World Was Once all Miracle has the advantage of being as concise as haiku, tightly constructed but hinting at greater mysteries.  Please read my piece Why I couldn't write up Raymond Yiu's Symphony til now here). 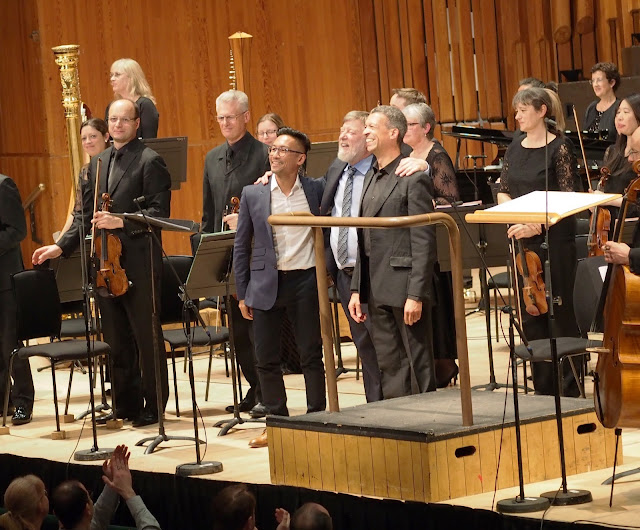