Hubert Parry's The Soul's Ransom (1906) has been called an "experimental masterpiece", one of the first successful English compositions to move away from the 19th century oratorio, foreshadowing the mature works of Parry's pupils, Vaughan Williams, Holst  and Howells.  "It is arguably a link work", wrote Bernard Benoliel, "between The Dream of Gerontius (1900) and The Sea Symphony (1909)".  Parry was a scholar who revered the work of Heinrich Schütz, and also of Johannes Brahms.  In The Soul's Ransom (1906)  he blends together elements of very early German baroque with the (then) fairly modern master, adapting the instrumental and vocal style forms of very early German baroque and  forms that were still relatively modern at the turn of the last century, "welding them into a structure where the effect is that of a terse and highly organic symphonic poem in four sections.  The orchestra in the linking interludes and postludes functions as a ritornello, whilst the choruses, mostly in four parts, have a knotty quality which gives overall contrapuntal fabric a pre Bachian sense of movement".

"Structurally", writes Jeremy Dibble, "The Soul's Ransom is the most concise of all Parry's ethical choral works in its four-movement design and there is at times a more convincing adaptation of Baroque "style-form".  This is true of the affecting recurrences of the clue-theme symbolizing comfort and compassion...... and even more so in the second movement where the three Beatitudes of the solo soprano....are answered in turn by the contrapuntal ritornello of the chorus."

The full title is The Soul's Ransom -The Psalm of the Poor, or Sinfonia Sacra,  and in Parry's own words a "moral oratorio". Although he was an atheist, Parry's core values were closer to the true spirit of Christianity than to the image of the composer promoted in recent years to serve the state and establishment.  We need to hear Parry the man and composer on his own terms.  The texts are chosen from a range of sources, in the Hebrew and Greek testaments, connecting the Beatitudes with prophetic tradition, much in the way that Blake connected legend and protest in Jerusalem. Parry wrote his own words for the big final chorus, highlighting it with defiant glory, the organ booming.  Dibble doesn't like the finale, calling it "anaemic" but for me, its stoic simplicity is its strength, much in the way that Brahms' German Requien draws power from being uneffusive, like pietist prayer. 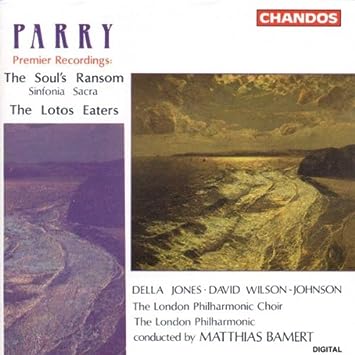 "See now, ye who love the Light,
Ye shall not in darkness stray. ....
Truth will not die !
In every soul of man who lives,
The Spirit cannot lie!
To each and all the choice it gives
To rate the tempting world aright.....
To ward the ransomed soul to attain
To flawless harmony, divinely pure,
With that which was, and is, and shall be
Forever more endure"

The only recording was conducted by Matthias Bamert, with the London Philharmonic Orchestra, Della Jones and David Wilson-Johnson and the London Philharmonic Choir, in 1991, re-issued more recently by Chandos. The orchestral introduction has majestic sweep, suggesting the tides of  the ocean. "Who can number the sands of the sea, the drops of rain and the days of Eternity" sing the chorus. The shifting textures suggest the vastness of the universe and the "multitudes" on earth. "Hear ye this, O ye people, the inhabitants of the World" sings the bass baritone with great portent. "Man that is in honour, but understandeth not, is like the beasts that perish!"   Parry sets only three of the Beatitudes, but chooses them carefully : Blessed are ye poor, blessed are ye that hunger and Blessed are ye, when men revile you and persecute you.  To further the point, the chorus sings "Man liveth not by bread alone".  Bass and chorus recount the Prophecy of the Bones (Ezekiel 37, 1-14).  "The people who walked in Darkness" sings the soprano, chorus and orchestra thronged behind her, "have seen a great light.". What is that light to which Parry's texts refer, and the prophecy that cannot be fulfilled on this earth ?  In Christian teaching, we think we know the answer, but Parry suggests a more esoteric, more inclusive "Enlightenment".  Close, indeed to Mahler's Symphony no 8, with its recurring images of "Accende lumen sensibus" and the "Veni Creator Spiritus" (the idea of enlightenment as creative force). Both Mahler 8 and Parry's The Soul's Ransom were completed in 1906.  Pure coincidence. Neither composer might have been aware, but both were onto something good.  The words "Soul's Ransom" are Parry's own, suggesting that he might have equated "darkness" with ignorance and suffering, "light" being wisdom and moral courage.
at April 01, 2018