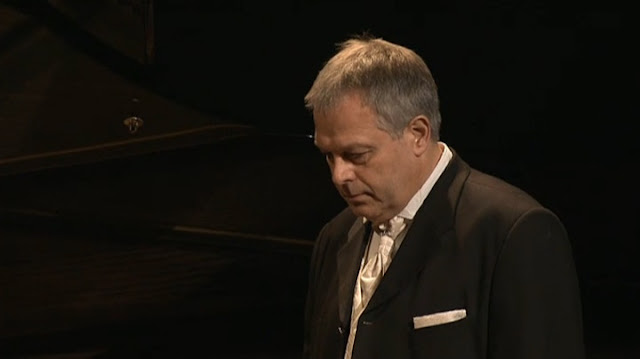 Christoph Prégardien at the Wigmore Hall, welcomed return of the perennial favourite of Wigmore Hall audiences. Prégardien and Julius Drake began with Carl Loewe’s Der Nöck (op 129/2, 1857) one of the most lyrical Lied by any composer, in a genre rich with beauty,  to a poem by August Kopisch.  Beside a tumbling waterfall, a water sprite plays his harp, enchanting the torrent so it hangs suspended in mid air, the vapours forming a rainbow halo. Circular figures in the piano part suggest tumbling waters. Prégardien breathed into the long vowel sounds in the refrain so they rolled. The flowing refrain evokes both the song of a nightingale and of the harp, symbols of song.  But suddenly the magic is broken when humans draw near. The waves roar, the trees stand tall, and the nightingale flees, until it’s safe for the Nöck to reveal himself again.  Prégardien and Drake paired this Der Nöck with another setting of the same poem which is driving me crazy because I can’t identify it, though I can’t place without having to look it up.

So omnipresent is Schubert’s Erlkönig that Carl Loewe’s Erlkönig (Op 1/23 1818) might seem to pale in comparison.  But it really isn’t bad on its own terms.  Loewe emphasizes the word “Knaben”, which Prégardien sings sensually : perhaps Loewe understood the subtext better than Schubert did, even if the song isn’t a masterpiece. Loewe’s “true” Erlkönig in any case is Herr Oluf, or even Edward, both songs of disguised sexual anxiety.  Loewe also wrote another song, Der spaete Gast Op. 7 Nr. 2 to a poem by Willibald Alexis (Georg Wilhelm Heinrich Häring 1798-1871), an “alternative” Erlkönig. Read more about that here

More spooky events in Robert Schumann’s Belsatzar op 57 (1846). This time the scene is a grand party in a palace, but an unseen hand writes a curse on the wall.  Prégardien’s singing was restrained, creating the drama is growing tension, holding back rather than bursting out. The last line was all the more chilling because it was delivered with understated calm. “Belsazar ward aber in selbiger Nacht von seinen Knechten umgebracht”.  A quick return to water spirits with Franz Liszt’s Die Loreley, S273 (1843).  Though Liszt is now established in the Lieder canon, his songs reflect his greater interest in pianistic expression.  Where Liszt write a lovely part describing the tumbling waves, the setting of the vocal line is rather more laboured.  Fortunately, Prégardien’s artistry injects convincing elegance.

Schumann’s genius as a composer to poets is demonstrated by his Liederkreis op 39 (1840) to poems by Joseph Freiherr von Eichendorff, written the same year as his Liederkreis op 24 to poems by Heinrich Heine.   Two very different poets, two very different ways of settingb text.  Although Schumann, Heine and Eichendorff were more or less contemporaries, Eichendorff mined a vein more attuned to early Romantic values, where folk wisdom, albeit idealized, still  had much to offer.   Songs liie Waldesgresräch and Im Walde deal with mysteries of the forest, the forest being code word for what we’d now call the subconscious. Like all good Romantics, Eichendorff was an explorer. Songs like Fruhlingsfahrt and Der frohe Wandersman show that  Eichendorff was fascinated by wilder shores even while he praises domesticity. Though genuinely devout, his homilies are talismanic, for he intuits that creativity can be dangerous. An artist is driven by something greater than his own free will.  Happy Wanderer? No way.  Prégardien’s timbre is darker these days, but artistry grows with experience.
at April 16, 2018