Why we ALL need to save St John's Smith Square 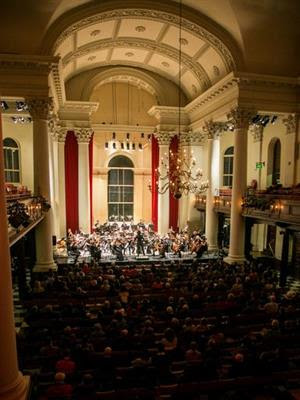 Please help save St John's Smith Square ! Follow THIS LINK to see what's happening and why we need to do something.  I've made a donation already andf intend to do more.  Donations alone aren't going to fill the shortfall but they do matter because they are a statement of support.  We must give, in order to send a message to the powers that be.
Though there are several small to medium sized venues all round London, St John's is unique in that it already has a track record for enterprise and excellence.  St John's is unrivalled for baroque and early music, and has been a significant force, over the last 50 years, in the revival of well-informed interest in these genres. This isn't some obscure specialism.  British music and culture in general derive from the glories of the 16th, 17th and 18th centuries. Where would this country be without Handel, Purcell, Blow, Arne and a host of others ? Denigrate the baroque and denigrate the finest flowerings of British culture, since modern British music derives so much from an appreciation of our baroque past. Where would Vaughan Williams, Britten and even Harrison Birtwistle and many others  be without their love of ancient music ?  And with music, much of the wider culture, such as poetry, literature and gistory that once made  Britain great.   SJSS isn't just for those who use it : if benefits the nation.   It's a heritage project in the widest sense.

St John's Smith Square proved its value while the Queen Elizabeth Hall was being renovated, offering a home for the Orchestra of the Age of Enlightenment and the London Sinfonietta.   The place is flexible enough that it can support diffrent types of music and performance.  If the South Bank continues its policies of everything "but" serious music, we may yet need SJSS as a refuge.  Being small and flexible, it's a relatively cheap place to run without the management superstructure large places need to maintain.   The very fact that SJSS has survived so long is a testament to its virtues.  So why wreck what pretty much works ? The building can't be adapted for offices or posh housing, though there might be some who'd like that.
Long term what needs to be done is support from the public sector, like it or not.  That means the Arts Council England, who now control funding for everything, not only the creative arts but museums, libraries, capital biulding projects, individual start ups and community projects.  Governments like that because it means they can offload responsibility  without being caught in the act.   But it's short sighted thinking.  The arts are an important part of the British economy. They are also part of the image of Britain as a cultivated nation with a heritage to be proud of. Mess that up and everyone loses.  What St John's Smith Square represents is British culture, and its unique tradition. That is not a minority interest, nor even a London thing.  It's the very basis of our heritage, whether or not the man in the street realizes it.  Everyone stands to gain from a national perspective.   For ACE shouldn't that be a priority ?
at April 17, 2018